Hillary: The perfect one

The campaign memoir from the unsuccessful U.S. presidential candidate does little to get Democrats back on track 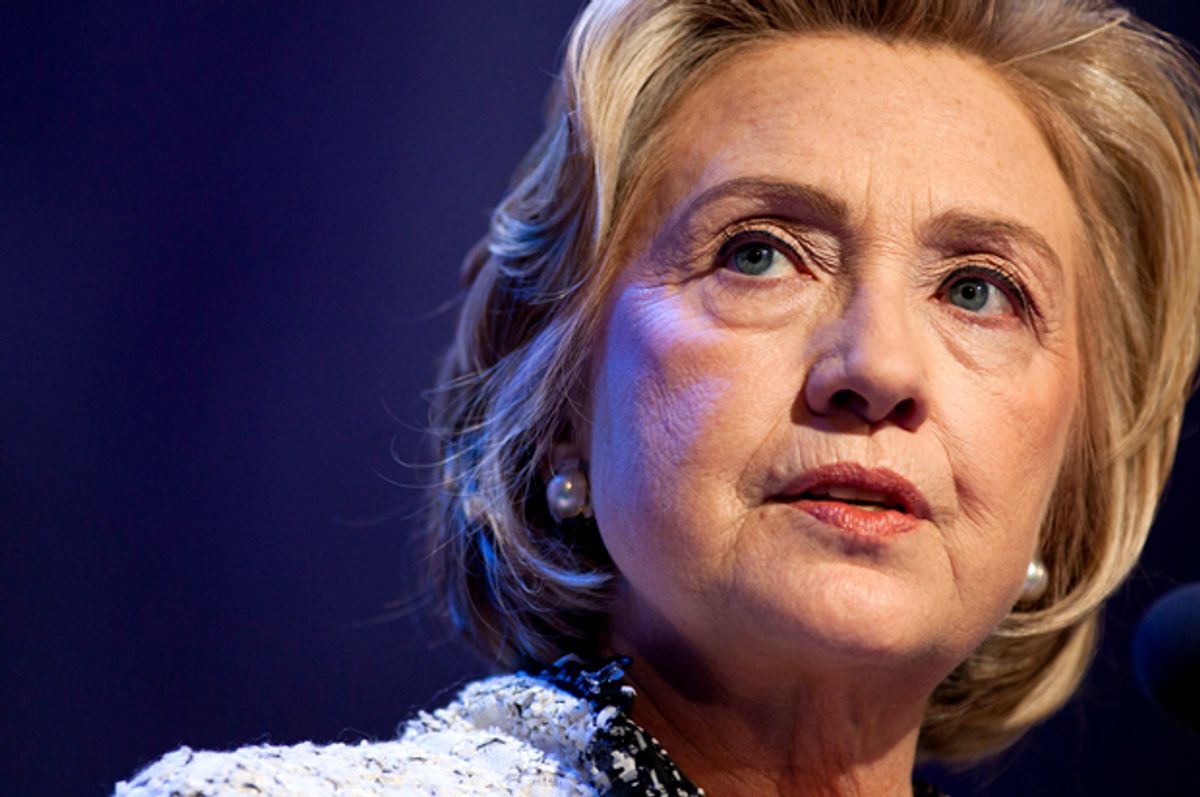 This article originally appeared on the Globalist.

Hillary Rodham Clinton has put forward a further volume of her memoirs, entitled “What Happened.” The woman who was destined to become the first President of the United States remains true to her long-standing, diva-like line: The fault for any mistakes always lies with others.

Whether Donald Trump, the FBI, the Russians, the U.S. political system, the U.S. electoral system or Bernie Sanders, her internal party rival for the nomination — they are the forces who coalesced to ungraciously put a spoke in the wheel of history, screwing up “HRC’s” triumph.

That the race was always deemed “hers to lose” and that she did achieve just that, goes unmentioned.

At the edges, there is a bit of talk about the email mishap, for example, but — this being a story about the Clinton universe — is mainly also taken as a staffer failure.

Or, take for another example of damaging unforced errors, such mind-numbing choices by the 2016 candidate as her own grotesque self-indulgence to rake in of astronomical speaking fees – while many Americans were really still dealing with the fallout of the recession.

What really sealed her fate was taking that money not just from deep-pocketed (but politically unpopular) organizations like Goldman Sachs, but also from cash-strapped state universities.

She has now hand-waved all of this away in the book, not even with an acknow-ledgment that it was a boneheaded move. Instead, she says that she ought to have anticipated bad “optics” and a double standard (relative to highly-paid male speakers) and therefore avoided it. No wonder people see her as the ever “incorrigible one.”

To put it mildly, the one dimension that Clinton (wife and husband) really excel in is being resistant to advice and gradually weeding out those from their inner circles who attempt to give it. The two Clintons don’t just know everything, they also let other people understand that they know everything better.

The extreme arrogance, but also the woodenness of the candidate, is basically left untouched in the laborious 512-page account of what might better be titled “Why I Shouldn’t Have Lost.” The moment for catharsis has been missed.

No wonder readers are wondering if the real culmination of the writing project is to launch another campaign – to finally fulfill HRC’s historic destiny.

Fortunately, the book and the accompanying promotional tour have taken such an unconventionally nasty turn that it is only likely to sour skeptical Democrats and independents on her further. Little wonder that she is polling with less favorability than Donald Trump, according to a Bloomberg News poll in July 2017. The book will only play well among true believers.

The book is nonetheless probably the Clinton camp’s effort first to rewrite history of the 2016 election campaign and then, if possible, to remake history.

It does not matter in this regard that Hillary Clinton would have been a better president than Donald Trump, simply by being less incendiary. Presidential politics is not about the rearview mirror. You either were elected – or not.

It is said that Donald Trump despises and/or has deep contempt for his (Republican) Party. Hillary Clinton is, by contrast, behaving as if she loves the Democratic Party.

In that seemingly clear contrast, it turns out that she — not Trump — is the hypocrite. In reality, Hillary Clinton only cares about “her” party to the degree that it serves as her vehicle for winning office(s).

In short, Donald Trump is actually much more honest in dealing with “his” party. He has always been clear that he is almost exclusively concerned with his own ego. This is no different in the case of Mrs. Clinton, but she surrounds herself with pretense and engages in full-scale discombobulation.

Anyone familiar with the historical “content” traditions of American party politics also realizes that Hillary Clinton is a classic establishment-Republican (of the George H.W. Bush mold) more than she is a modern-day Democrat.

Cutting Sanders down to size

This is underscored by the new book’s emphasis on cutting Bernie Sanders down to size. The erroneous perspective of the Clinton machine is that Sanders should have been no more than a mere “warmup” act for the real candidate – not a serious contender.

That Sanders dared to pursue a real candidacy is viewed as a shameful ego trip, if not an act of lèse-majesté. Plus, it is implicitly deemed as a sexist act toward Clinton.

The emphasis on Sanders as a self-professed “socialist,” as if his views are damaging to the Democratic Party, is ridiculous. In Germany, he would be probably to the right(!) of Wolfgang Schäuble, the German Finance Minister, who is deemed a conservative in the context of German politics.

The fact that Sanders won over large parts of the youth vote (and even many middle-aged voters) in the Democratic camp, despite his own advanced age, clarifies how much the policy and person of Hillary Clinton is variously considered obsolete or simply disliked.

The misplaced disdain for Sanders also manifests itself in another telling manner: The Clintonites continue to rule the Democratic Party with an iron fist and oppress any “youthful” reform elements to this day, even at the local party level.

Regardless of whether Hillary Clinton – or Bernie Sanders, for that matter – were to become a candidate again for 2020, the real contest within the Democratic Party is the battle between the big-money party financiers and the popular forces of the coalition that supported their bête-noire, Bernie Sanders.

To these American plutocrats, even social welfare policy views that in Germany belong to the political core of the center-right CDU, are profoundly suspect if they come from a U.S. politician.

That big-time campaign financiers demonize and express not just concern, but outright horror over the positions of Sanders is almost comical. They make it sound as if he Sanders is keen on launching a 1789 style French Revolution, taking him far too literally when he calls for a “political revolution.”

That Sanders embraces policy positions that are widespread government policy in continental Europe does not change their assessment.

Sanders – or rather the younger generation that supported him – may not have the money or the inside track in the corrupt business of American politics. But they have the forces of dynamism, authenticity and true engagement on their side.

Young voters ask aloud why they should vote for the Democrats, which have enacted under the Clintons a quarter of a century a tax policy for the rich. Voting for the Clinton Democrats, as a kind of minor-key Republican outfit, provides them with no motivation.

Never mind that, in the Clinton world, the party continually demands the youth vote for nothing in return, while focusing on placating conservative older voters.

The cynical counter-argument that is often served up — that a Bernie Sanders or an Elizabeth Warren would split the party in a general election by alienating “moderates” in the race in 2020 – remains less than an untested assumption.

Given the continuing degree of nervousness that is gripping the American middle class, more focus on socio-economic equity and safety nets might also be the key to winning elections.

Meanwhile, the Republicans themselves are – thanks to Trump’s machinations – very much a divided party. They oscillate between classic business conservatives and a rabid hate-oriented wing. Each side is hoping that Trump will give them what they want regardless of how it offends the other.

The Democrats have been far too long the backers of the plutocratic billionaire class of America, thanks to the Clintons.

The Clintons still gladly call themselves “liberal” in the American sense of the word. But, not least owing to the need to placate their campaign contributors, they have become liberal in the classic British sense of the word, focused on unshackling the powers of capital.

To all related questions, about the impact of this big money on the party agenda, Hillary Clinton also has a fitting answer: Complete denial.

Perhaps a hundred words, on the other hand, are devoted to detailing her favorite yoga breathing exercise.