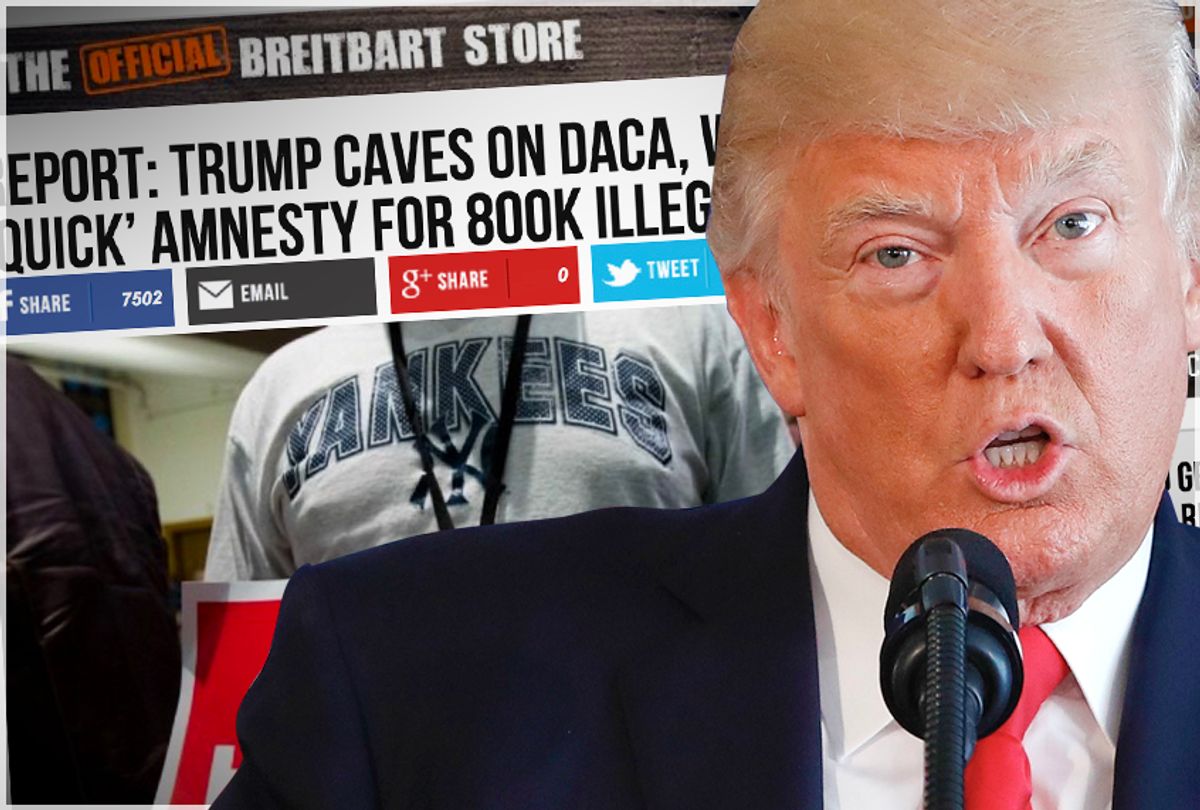 From indignation to outright fury, Republicans were disenchanted Thursday morning over news that President Donald Trump plans to protect immigrants known as DREAMers in exchange for repairs of an existing fence along the southern border.

Democratic leaders Nancy Pelosi and Chuck Schumer announced after a dinner with the president Wednesday that they had reached a deal securing the protection of DACA. A "big, beautiful wall" that Trump campaigned on was reportedly not part of the agreement.

In a series of tweets Thursday, Trump pushed back on the notion that he struck a deal, before describing the terms of an agreement that sounded remarkably similar to the one Pelosi described.

No deal was made last night on DACA. Massive border security would have to be agreed to in exchange for consent. Would be subject to vote.

The WALL, which is already under construction in the form of new renovation of old and existing fences and walls, will continue to be built.

Does anybody really want to throw out good, educated and accomplished young people who have jobs, some serving in the military? Really!..... — Donald J. Trump (@realDonaldTrump) September 14, 2017

...They have been in our country for many years through no fault of their own - brought in by parents at young age. Plus BIG border security — Donald J. Trump (@realDonaldTrump) September 14, 2017

These tweets confirmed that Trump was willing to preserve DACA as long as Democrats approved of some border security improvements — sans the wall. This revelation traumatized Republicans who were finally realizing that their master negotiator was not going to deliver on his promise.

THE ART OF THE STEAL: Let's hope that Pelosi & Schumer misrepresented the #DACA deal. @realDonaldTrump

Has Trump betrayed the base on amnesty?

Something tells me Breitbart's not best pleased with Trump. :thinking_face: Could be wrong. pic.twitter.com/AXDUPKxoUn

Other conservatives, such as the "Fox & Friends" crew have tried to spin the latest news as a win for Trump because the agreement makes it look as if the White House is working with Democrats to move the country forward. Host Steve Doocy said that Trump was only reaching across the aisle to Democrats because he could get nothing done with Republicans.

Sean Hannity offered the same tune Wednesday night when he first heard of the Trump-Schumer-Pelosi agreement, saying that this result was "100 percent" congressional Republicans' fault.

If reports true 100%. I blame R's. They caused this. They wanted him to fail and now pushed him into arms of political suicide--IF TRUE. https://t.co/WTqe6jzfa9 — Sean Hannity (@seanhannity) September 14, 2017

One Republican in Congress, Rep. Steve King, told CNN Thursday morning that his "life's work" would be undone if Trump truly struck a deal protecting DACA recipients. When asked what he would do if Trump handed a win over to Democrats without any policy consolations in return, King suggested he was powerless and that all he could do was move on to trade and tax reform.

King did say, however, that if Trump moves forward on this DACA deal, "the base will leave him."