Hey, Democrats: Remember that this president thrives on white supremacy

Trump's comments about the "bad dudes" of antifa, and his painful Tim Scott moment, remind us who he really is 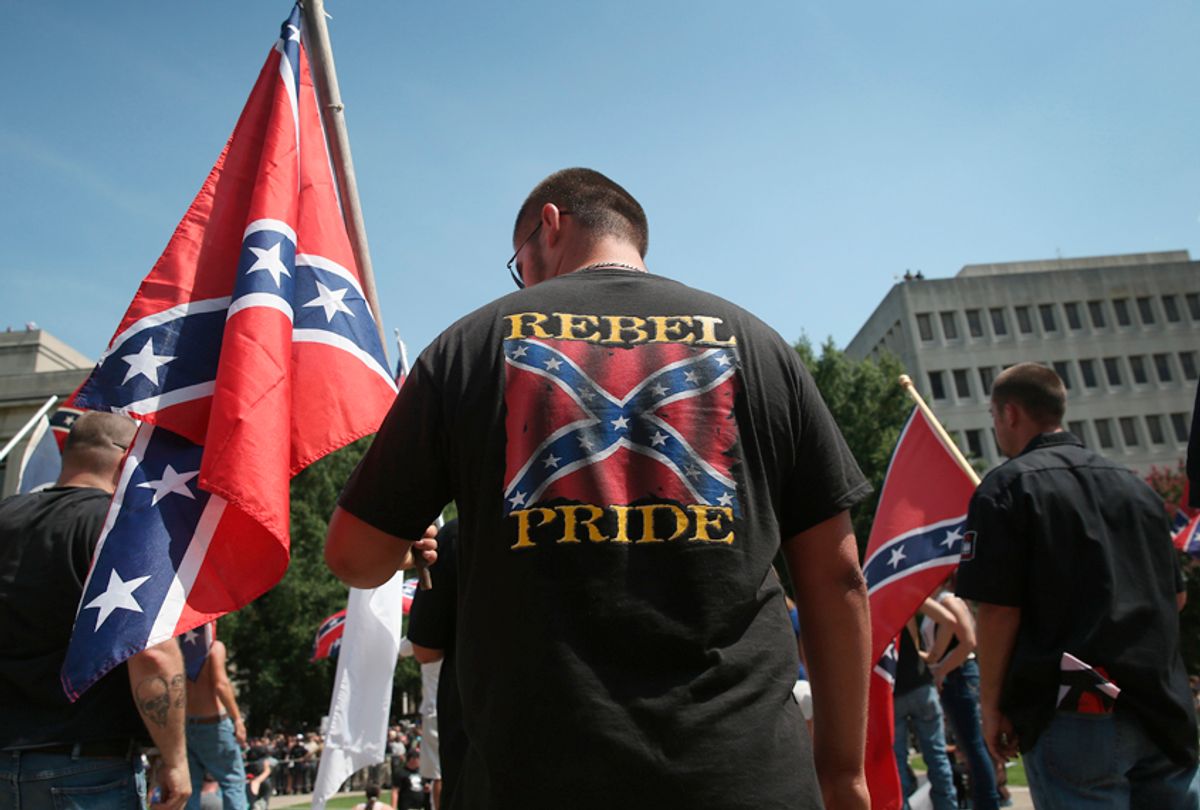 Word on the street says that Donald Trump is feeling his oats. He believes he has put the ugliness of Charlottesville behind him and the flurry of positive reporting around his"deals" with the Democrats, along with the fact that the government seems to have done a decent job handling the hurricanes, has clearly given him a lift. For all his loathing for the media nothing thrills Trump more than good coverage and he looks happier than we've seen him in ages.

But as always, he can't help stepping on his own success. Every time mainstream pundits believe Trump is finally "pivoting" he flies out of orbit and does something really stupid. And, oops -- he did it again.

Trump awoke on Thursday to a firestorm of controversy over the DACA deal he reportedly cut with the two Democratic congressional leaders, Chuck Schumer and Nancy Pelosi. He subsequently went back and forth throughout the day, speaking with the press frequently as he visited the Florida disaster zone. That issue will have to be sorted out later.

But as all this was going on, the Congress had passed a resolution condemning white supremacy, which White House press secretary Sarah Huckabee Sanders said Trump would sign when it got to his desk. Then she in turn condemned an ESPN reporter for tweeting that the president is a white supremacist and called for her to be fired, a disgraceful and hypocritical comment since Donald Trump himself had tweeted numerous times that his predecessor, our first black president, was a racist.

Meanwhile, Trump held a photo op with the only African-American Republican senator, Tim Scott of South Carolina, who had requested a meeting with the president to talk about Charlottesville. Scott reportedly believed that if Trump heard his story and understood the history better he might come to understand why his remarks were so provocative and hurtful.

The White House issued a strange word-salad statement about the meeting:

President Donald J. Trump and Senator Tim Scott of South Carolina met today to discuss the Administration’s relationship with the African American community, the bipartisan issue of improving race relations, and creating a more unified country. President Trump remains committed to positive race relations and looks forward to continuing the dialogue with Senator Scott, the African American community, and leaders from diverse communities across the country, all of which have a wealth of perspectives and experiences with respect to this issue.

When asked after the meeting whether the president expressed regret over his post-Charlottesville comments, Scott displayed a "pained expression," the New York Times reported, and said that Trump "certainly tried to explain what he was trying to convey."

In other words, no.

Scott made it clear that his motive for requesting the meeting was to explain to Trump that there was no equivalence to the two sides in Charlottesville, saying, "There's no way to find equilibrium when you have three centuries of history versus the situation that's happening today."

Fast forward 24 hours and Trump is asked about the meeting on Air Force One during the trip to Florida. Apparently, he thinks he taught Scott a thing or two:

We had a great talk yesterday. I think especially in light of the advent of Antifa, if you look at what's going on there, we have some pretty bad dudes on the other side also and essentially that's what I said.

Tim Scott responded to Trump's comments on Air Force One by saying, "Antifa is bad and should be condemned, yes, but the KKK has been killing and tormenting black Americans for centuries. There is no realistic comparison. Period."

After watching Trump closely for all these months I think it's clear that when he's speaking off the cuff in situations like this, he's being real, even when he's lying about the details. He obviously truly believes that the neo-Nazis and the KKK in Charlottesville and elsewhere have gotten a bum rap.

He's not trying to make the Antifa protesters equivalent to white supremacists,  not really. He thinks they're worse than white supremacists. He says they're "bad dudes" and likes to portray them as a sinister threat to society. He thinks the neo-Nazis and the KKK are more legitimate since "good people" march beside them and they are trying to maintain their "cultural heritage." He sees their point.

The president of the United States refuses to acknowledge, or is too stupid to understand, that these are movements that killed millions of people in a quest to ensure white supremacy over racial and religious minorities. They are evil incarnate. Nobody on earth is worse than they are.

Unfortunately he's not alone. The University of Virginia Center for Politics and Reuters/Ipsos just released a large poll of racial sentiments in the aftermath of Charlottesville. The poll found that there are "troubling levels of support for certain racially-charged ideas and attitudes frequently expressed by extremist groups," including the fact that only 34 percent of people disagree with the statement that the country needs to protect its "White European heritage." Strikingly, respondents were evenly split on the statement that “white people are currently under attack in this country,” with 39 percent saying they strongly agreed or somewhat agreed, while 38 percent disagreed.

A majority of Americans recognize that people of color are far more threatened and discriminated against that whites. But as the authors of the poll point out, even a small percentage represents millions of people who hold some highly disturbing views.

As David Neiwert of the Southern Poverty Law Center wrote for the Washington Post on Thursday, neo-Nazis and white supremacist groups are growing. And since the election they are organizing and marching in Donald Trump's name. Neiwert writes:

The cold, hard fact that racist thugs shout and chant Trump’s name (something we all saw happening in Charlottesville) while threatening and intimidating minorities should give us all pause — particularly the president himself.

I think we all know how much Trump loves it when people shout and chant his name. The "bad dudes," in his view, are the people who oppose them.

Let's hope the congress succeeds in legalizing the DACA kids. It's an urgent humanitarian crisis, one that was essentially created by Trump himself. But Democrats need to think long and hard about how willing they are to continue to play games with this president and get cute by saying "he likes us."