Everything we thought we knew about Devo's "Whip It" was wrong 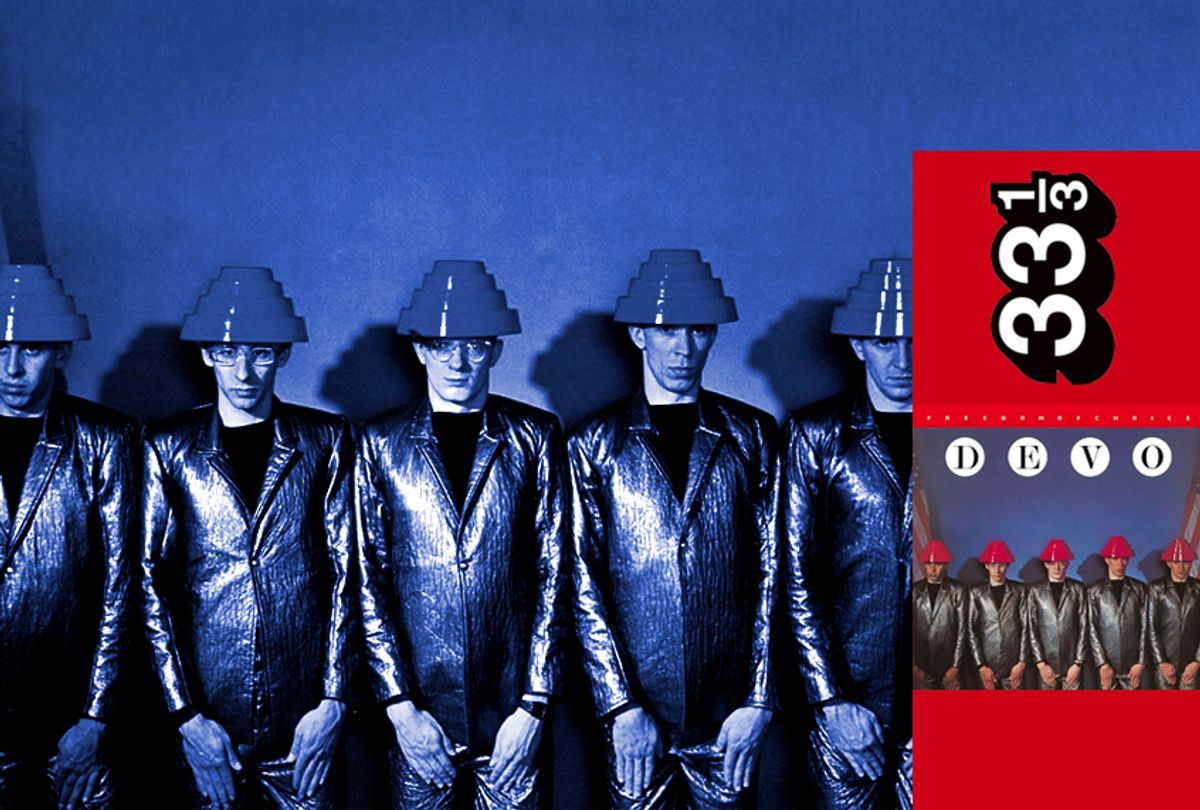 Excerpted from "Devo's Freedom of Choice" by Evie Nagy (Bloomsbury, 2015). Reprinted with permission from Bloomsbury Publishing.

Go forward, move ahead, try to detect it, it’s not too late.

According to Jerry, who wrote the lyrics, “Whip It” is a tongue-in-cheek pep talk satirizing hollow American optimism. “I had been reading Thomas Pynchon’s Gravity’s Rainbow, and he had these limericks and poems in there that really made me laugh, where he was making fun of all the American, capitalist, can-do clichés—Horatio Alger—‘there’s nobody else like you,’ ‘you’re number one,’ ‘you can do it.’ And I was just trying my hand at it.”

While it would certainly be consistent with Devo’s methods to include a knowing double entendre, they are adamantly ambivalent about the common misunderstanding, which both goosed the song’s popularity and made it ever more clear that the masses would never quite get what the band were trying to do. “We wrote it as a ‘you can do it, Dale Carnegie’ pep talk for President Carter,” says Mark. “We were afraid that Republicans were going to get in there [in 1980], and they sounded very nasty at the time. They were running this guy, Ronald Reagan, that seemed like a total—he seemed like he didn’t even have a brain. We were like, ‘How could that be our president? That’s impossible, that they choose him to run for president.’ So we were writing this music that was like, ‘You can do it, Mr. President.’ And then, of course, we were doing lots of interviews back then, and we’d have to get up at seven so we could go be on a morning talk show while people are driving to work. And we’d be sitting in the other room waiting to go in and talk to the disc jockey, and he’d be on the air, going, ‘You know, I whipped it just the other day, haw haw haw haw,’ and we’re like, ‘What an asshole.’ We felt very misunderstood. And then it just gave us more reasons to be crabby.” But when it came time to make the song’s now-legendary music video, Devo ran with the S&M theme to absurd extremes.

If you know nothing else about Devo, you know “Whip It,” the band’s only gold-certified single, which reached No. 14 on the Billboard Hot 100 and became a defining anthem of new wave’s rise. The song’s drumbeat and primary guitar and keyboard lines are each so distinctive that they could likely be identified, even in isolation, by anyone who’d heard the song a few times. That each part stands so well on its own is probably because Jerry says he assembled “Whip It” from two separate sketches—the famous five-note climb and the slower, three-note descent—that Mark brought to the group on cassette tape from his at-home writing sessions. “I asked him when he did that ‘doon-doon-doon-doom-dong’ riff, and he goes ‘well, I’ve had that for about six months,’” says Jerry. “I said ‘Really?’ and he goes ‘yeah, it’s just “Oh, Pretty Woman” cut in half.’”

Mark had been living with his brother at the house of Bob’s girlfriend’s mother, who rented him a small bedroom for sleeping while not on tour and writing music. “I had been listening to Roy Orbison, and I really liked the song ‘Oh, Pretty Woman,’” says Mark. “And then I started thinking about how you take things apart, and reductive synthesis, so I just took part of the riff, and I wrote another ending. I just took some basic, generic thing and put an ending on it that was a different sound and from a different place.”

The motorik drumbeat grew out of another collaboration, with Captain Beefheart’s drummer Robert Williams, who shared a house not far from Mark with Go-Go’s drummer Gina Schock. “I didn’t really have a good set of drum loops or drum machines or anything, so what I used to do is lug my tape recorder with me over to my friend Robert Williams’s house,” says Mark. “The Go-Go’s would rehearse there. Captain Beefheart would rehearse there. I would take my tape recorder and play a drum beat, and get Robert to play it for, like, four minutes on a tape so I could write music to it. And so, he was the first person who played the ‘Whip It’ drum beat, and he played it without any music.” Alan Myers then added fills and made the quick, relentless rhythm his own; it’s one of the best examples of Alan’s ability to be, as Jerry called him after his death in 2013, a “human metronome and then some.” The song absolutely relies on the beat’s consistency and drive.

For the all-important whipping sounds, Devo and Robert Margouleff used an EML ElectroComp 500 synthesizer, Neumann KM 84 and U 87 condenser mics, and a lot of space. “There was a long hallway at The Record Plant that was actually outdoors between two buildings, but only about three and a half feet wide,” says Margouleff. “We used that hallway to go from Studio A to Studio B and then back into the back of the building. It was very reverberant, and that’s where we recorded that whip crack.” There’s also a whipping-back-and-forth quality to the vocals, which Mark and Jerry decided to trade off. “It was a call and response,” says Jerry. “Kind of like white boys rapping.”

Unlike artists who grow to hate their biggest hit (see Robert Plant vs. “Stairway To Heaven”), Devo don’t begrudge “Whip It” its iconic status, though they would have liked more of their songs to achieve it. “I’m glad it was ‘Whip It,’ because it’s certainly twisted and original,” says Jerry. “Those are the hallmarks of Devo, that you expect something different or witty or twisted, a little off. It has all that. And it came from a good place; it came from a pure, creative, open collaboration, and that’s to me when all the best stuff comes.”