There is a noble (possibly divine), if baroque, purpose behind the kinesthetic density of Araonfsky's lofty work 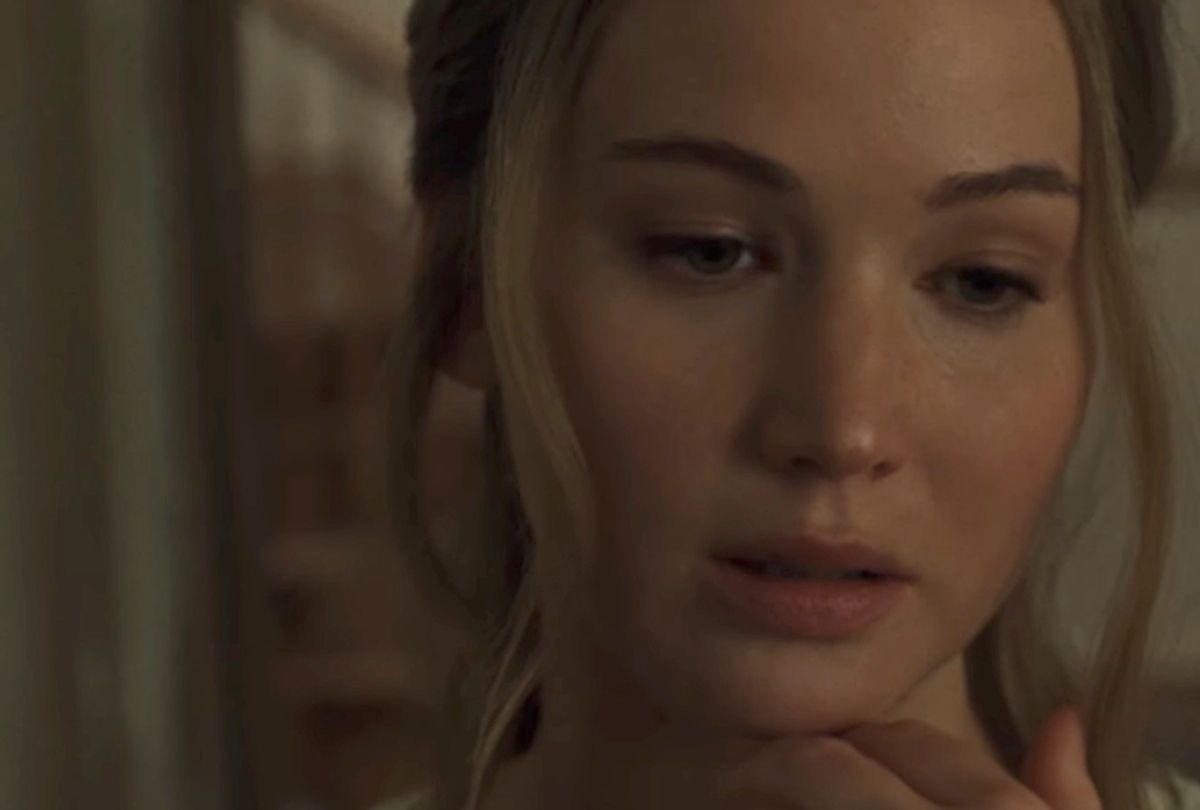 There’s an episode of “Frasier” in which the titular radio psychiatrist is asked to commission a catchy little jingle for his radio show: something zippy, catchy, something you can hum while listening to the show in your car. Instead he retains an orchestra, a choir, a triangle-player, a slide whistle (to represent the slippery moods of the manic-depressive), and his ever-grudging brother Niles to perform a booming dramatic monologue. The ever-circumspect Niles attempts to warn his brother against extravagance, invoking the age-old wisdom that “less is more.” Undaunted, Frasier responds: “Yes, but if less is more, just think of how much more more will be!”

This is the credo of the artistic maximalist: more is more. And if there’s one American filmmaker whose talents reveal themselves when stretched out to such spectacles of scaled-up bigness, it’s Darren Aronofsky, whose new film, “Mother!” (stylized “mother!”), might be the most daring, intoxicating, head-shakingly unbelievable, utterly, unashamedly maximalist American motion picture released by a major studio since Terrence Malick’s “Tree of Life” in 2011, or even Richard Kelly’s “Southland Tales” more than a decade ago. It is a film of mythic proportion that valiantly strives to do, well, pretty much everything.

“Mother!'s" astonishing bigness may not be immediately apparent. This is not a grand-scale blockbuster of the Christopher Nolan mold that, we’re pestered, simply must be seen on the biggest screen possible. It’s not about immersion, or surrendering oneself to the absorbing scale of the cinematic experience. Rather, it's in the breadth of Aronofsky’s artistic vision, which attempts (and, I think, mostly succeeds) at offering a caustic comment on the breadth of artistic vision, and the whole of creation (and Creation) itself. (And here the enthusiasm and apostolic ecstasy will swerve into a discussion of the film’s plot and themes, which one should likely avoid if they have yet to see the film, which is just a torturous, clause-heavy, knowingly maximalist way of warning: here be spoilers.)

At the risk of belabouring the point, “Mother!” concerns itself with a topic that often proves unfashionable in American art, if not American life itself. It’s about God. It’s about God as a Creator, who gives life to humanity and then exhorts its praise. In this sense, it is about the ultimate arrogance of God, or rather, a god (though I do think Aronofsky is specifically concerned with the monotheistic capital-g God of Judaeo-Christianity, for reasons I’ll dig into in a second) who creates only so he can be worshipped for having created. And it’s about how a defiance of that divine egotism is, perhaps, the most deeply human and moral aim of existence.

After its tone-setting image of a woman bathed in fire, “Mother!” opens inauspiciously enough. A young woman (Jennifer Lawrence) lives in a rambling country estate with a writer’s-blocked poet (Javier Bardem) many years her senior. (All the characters are unnamed, which adds to the film’s archly symbolic, everything-means-something-else quality.) There is a chilliness to their relationship, despite the constant declarations of love. She faithfully devotes herself to renovating the house, which had been severely damaged in a fire. She says she wants to build a “paradise.” He spends his time attempting to write, but mostly puttering about, useless despite his looming physical presence. He also keeps a shimmering stone, shot through with luminescent veins, under strict lock-and-key. One evening, a visitor (played by Ed Harris) stops in, looking for a place to stay. He and the poet strike up a friendship over drinks. Before long, the visitor’s wife (Michelle Pfeiffer, wicked and severe, casting cut-eye all over the place) joins them. And then their sons. And then more and more visitors, pouring in from the emptiness around the house.

Lawrence’s dutiful wife is perplexed, but is mostly too busy running around keeping the house tidy to protest too much. After a particularly riotous party featuring many floors of imposing strangers, the couple makes love, Lawrence’s character becomes pregnant, and Bardem’s author conceives of a great poem, the kind that could reignite his career. That Bardem plays a poet, specifically, and not just some workaday novelist, is important: poet, from the Greek poetes, meaning to make or create. He is the poet as Creator.

In many meaningful respects, “Mother!” plays as a follow-up to Aronofsky’s last film, 2014’s Biblical blockbuster “Noah.” In that film, the last of the pre-flood Biblical patriarchs, played by Russell Crowe, recounts the story of Creation. He never refers to God as such, but rather “The Creator.” He describes the fabrication of the universe using language and metaphor that reappear, pretty conspicuously, in “Mother!.” As Noah describes it: “It was paradise. A jewel in the Creator’s palm.” In that film, the Creator moves from the demanding, punishing God of the Old Testament to a kinder God, promising to never again destroy mankind, despite the wickedness in their hearts. In “Mother!,” the Creator goes back on this promise, abusing humanity, sapping it of its love and strength, and demanding worship to satisfy its fathomless vanity.

“Mother!” may be easily dismissed as — to use an especially insufferable word — “pretentious.” Yet I cannot hep but feel, deeply and quite intensely, like Aronofsky’s closet analogue is another American filmmaker whose films are often dismissed as pretentious or ponderous or pointlessly naval-gazing: Terrence Malick. Both approach God with a necessary seriousness that is rare in American fiction. But while Malick does so to embrace the spiritual and transcendental, Aronofsky does so to turn away from such things, and to reject Him altogether, on His own terms.

The hero of the film is not Bardem’s poet/Creator, but Lawrence’s astoundingly confused archetype of humanity itself. “You never loved me,” she howls at him, somewhere in the film’s sustained crescendo of a climax, “You only loved that I loved you.” It was Eve who rejected the Creator and enticed man into sin. “Mother!'s" own mark of sin — an un-scrubbable clot of blood in the floorboards that reappears with telltale, Poe-ish intensity — is more-than-vaguely vaginal in appearance. Its softness compromises the floorboards, the structural integrity of this would-be Eden, and leads to the tools with which God himself might be annihilated. Aronofsky embraces the radical rejection of the stain of original sin. He embraces the image of Lucifer, as described in Ephesians, as “the spirit that is now at work in the sons of disobedience.” After watching “Mother!” one might amend that line to include, and in turn exalt, the daughters of disobedience, too.

Such mythic-scale biblical allusion may seem awfully grandiose and insufferably theme-y. It is, admittedly, not as deep as it is broad, or big. But it is at least legible. And more importantly, it unfolds riotously.

“Mother!’s" first act plays as a pastoral, feminine-gothic horror story, with shades of absurd comedy (it essentially inverts the surrealism of Luis Buñuel’s “The Exterminating Angel,” a film in which people find themselves mysteriously trapped in a stately mansion, by tapping into the absurd anxiety generated when people keep pouring into a house, seemingly unbidden). But it is in the film's second half, which follows the latter stages of Lawrence’s pregnancy and Bardem’s newfound celebrity, that the film blasts towards the beautiful and berserk.

In a masterful extended sequence that dovetails Aronofsky’s technical command with his clarity of visions (however crowded), Lawrence is sent spinning through her own house, beset by pilgrims who have arrived to see her husband. As she churns through rooms and up and down flights of stairs, the informal meet-and-greet and book signing turns into mob scene, then a rave, then a riot, complete with cops with plastic shields beating back the hordes. Aronofsky captures this manic action while locked in Lawrence’s subjectivity, his camera whirling around over her shoulder (a by-now cliché part of Arnofsky’s artistic arsenal, put to particularly good use here), the pace of the party-cum-apocalyptic-tumult escalating every time she turns around or crosses a new threshold.

Aronofsky stuffs these scenes like a wayward kid in cartoon packing all his possessions in a suitcase so he can split home for good. He leaves nothing behind. The frames are bursting at the edges, feeling as if they might explode and pour over into the space of the cinema itself. There’s as much — if not more — going on here than in any of the hyperactive action scenes of a Marvel superhero team-up or a Michael Bay battling-robot bore. And yet it all coheres spatially and stylistically, despite its manic pace and epic scale. It feels like a direct challenge to the arbitrary line drawn between the camps of big-budget blockbuster filmmaking and the American mock-indie arthouse. Why should the hack helmers of Hollywood blockbusters be the only ones who get to make big, impossibly busy movies? Why should they have all the fun?

It is, perhaps, difficult to know if Aronofsky’s achievement says more about him as an artist or the dire state of studio filmmaking. Ultimately, I believe praise of “Mother!” should lean toward the verve of Aronofsky’s vision as it emerges from the largely barren wastes of the American cinema. It is the purest expression of Aronofsky’s maximalist cinema; it is loaded with symbols and ideas and references, unapologetically, self-consciously showy. “Mother!” wears its ostensible affect, ostentatiousness, and, yes, pretentiousness with a well-earned measure of smug, typically human pride.

Aronofsky is not the artist-as-God but the filmmaker-as-Frasier-Crane, frantically conducting his overblown orchestra of violence, sex, cannibalism and swollen biblical metaphor, energized by a deeply felt belief that, sometimes, more is more.