The radical politics of Michael Bennett

The most vocal player in the NFL was recently the victim of police brutality; it won't stop him from speaking out 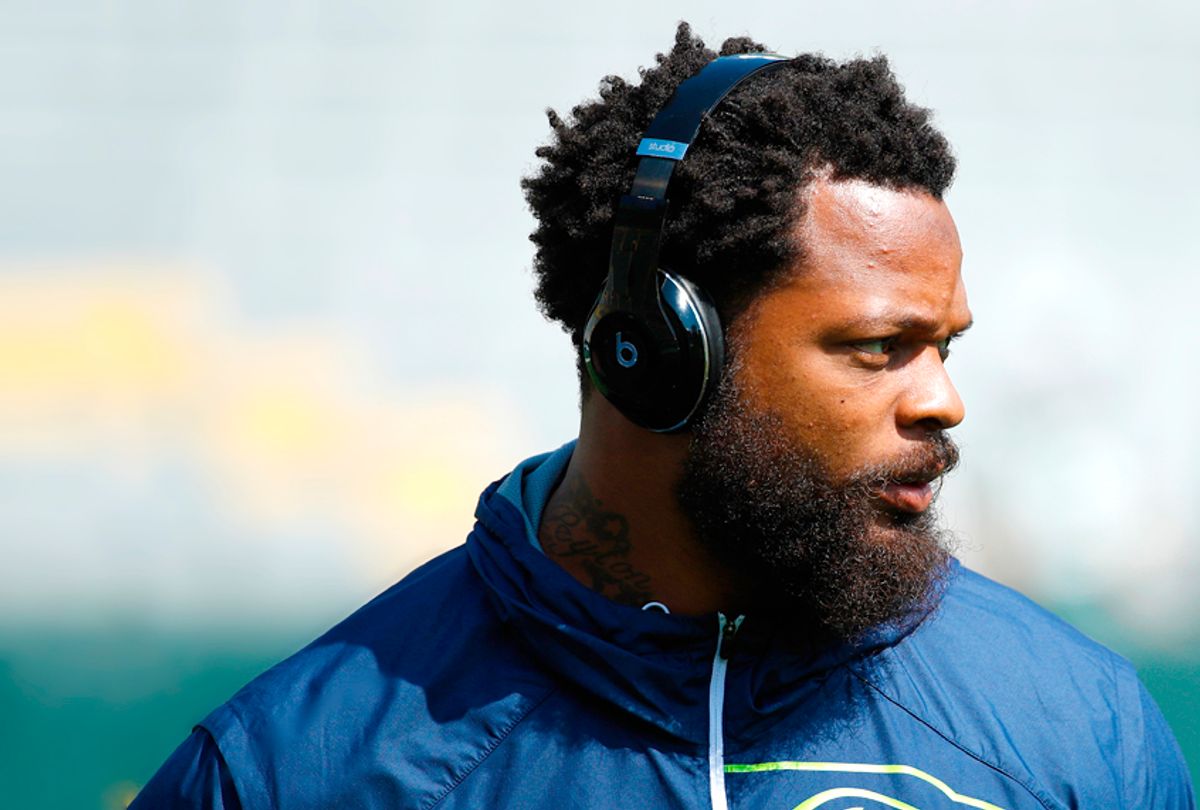 In December of 2015, Seattle Seahawks star Michael Bennett stepped in front of a group of cameras and reporters and said, "I’m going to vote for Bernie Sanders next year."

Bennett went on to say that he doesn't care if he's judged for his opinion, because it's his choice, and contrary to popular belief in 2015, "Politics is always a discussion in the locker room," he said. "I think that has a lot to do with what goes on around the world, and a lot of people we know are affected by things that go on. So we like to talk about it and like to be a part of it."

Before and since, Bennett has embodied that statement as a method of his existence. He doesn't just talk about the plight of oppressed people; he joins them, and 2017 has been his most vocal year yet. Throughout, he's challenged the stereotype that black athletes are not engaged and the expected notion that they should trade their silence for financial freedom.

In March, Bennett announced that he, inspired by Chance The Rapper's philanthropy, would donate all of his endorsement money to organizations that empower children and women of color. In a press release, be said: "Any company that decides to invest in me, just know that you’ll be investing in opportunities and providing inspiration for these families — many who feel unnoticed or go unmentioned." He called on other athletes do the same and, in general, to be more thoughtful about their brand alliances. "We must keep these companies socially accountable," he told the Undefeated earlier this month.

Bennett also committed 50 percent of his jersey sales to programs that "support inner-city garden projects," ESPN reported. His charity branch, The Bennett Foundation, is concerned with health in underserved communities, with a mission to "educate the community on healthy food choices, provide affordable alternatives to cooking at home and promote physical fitness as a family."

In July, Bennett hosted two events on the same day: a rally alongside local Black Lives Matter activists for Charleena Lyles, a black woman and pregnant mother killed by Seattle police officers, and an event called "Black business empowerment," which featured panels and discussions on building black wealth and procuring home and business ownership in the black community.

Bennett reignited Colin Kaepernick's anthem protests against racial injustice this season after the violence in Charlottesville. He also started a Hurricane Harvey relief campaign to provide immediate help to those impacted in his hometown.

What Bennett's widespread activism shows is his attention to the myriad ways black people in the U.S. are victims of state-sanctioned violence. This includes police brutality and the biases embedded in the criminal justice system. But also the consequences of segregated and under-resourced neighborhoods, from the limited or outright lack of access to healthy foods and health care to sub-standard education. This means the environmental injustice that takes place when those in power have the privilege to deny climate change while natural disasters devastate predominantly poor, black and brown communities. Overall, Bennett draws a bold line under the many systems of oppression that allow racial and economic hierarchies to persist.

He's also angled out beyond a national lens. In February, Bennett publicly declined to go on a sponsored trip to Israel, where NFL players were expected to serve as goodwill ambassadors and combat "the false incitement campaign that is being waged against Israel around the world," Israeli Cabinet minister Gilad Erdan said. In an open letter, Bennett declared his refusal to be a public relations puppet for the Israeli government and professed his empathy for the Palestinian people. He cited Angela Davis' "Freedom Is a Constant Struggle" for teaching him that true liberation happens on a global scale.

Bennett continued to say that, whether this decision angered or inspired people, simply put, it was about him being in accordance with his own "values" and "conscience." "Like 1968 Olympian John Carlos always says, 'There is no partial commitment to justice. You are either in or you’re out,'" Bennett said. "Well, I’m in."

Increasingly, he's not alone. Football players across the NFL are kneeling, sitting and huddling in solidarity with Colin Kaepernick and in support of racial justice. But Bennett's not satisfied: "Could you imagine if Tom Brady was to say what happened to Philando Castile was a tragedy?" he told the Undefeated. He imagines what the impact would be if the most famous NFL players joined the fight for equality.

Brady may be one of the most celebrated quarterbacks in the league, but when it comes to sports activism, it's Bennett that players are looking to. As sports writer Dave Zirin said: "courage is contagious. So when Michael Bennett speaks out, you see the ripple effect across the NFL, across the sports world and across sports fandom, as well."

However, there are conditions. The media still retains the lion's share of power in shaping the images of black athletes to the public. Sports activism remains up against "the ways American sports media specifically, and white masses more broadly, determine when and how black protest and self-determination are acceptable in national contexts," Jamal Ratchford writes in "From Jack Johnson to LeBron James: Sports, Media, and the Color Line."

There's no better demonstration of this than this year's NFL preseason, one where Kaepernick remained unsigned and jobless, while several players accused of physical or sexual assault found employment, and teams filled backup quarterback slots with objectively less-talented free agents.

Just this past Sunday, CBS NFL analyst and Super Bowl-winning coach Bill Cowher demonstrated exactly what the league's mindset is about the unsigned player. "Are you really committed to want to come back in the National Football game... and reestablish yourself as a National Football League player?" he rhetorically asked the quarterback who has often expressed his willingness and readiness to play. "Are you really committed to your craft? Are you going to take the opportunity that any team might give you?"

The belittling and dishonest questions show how being an activist and a serious athlete are mutually exclusive in the minds of many white coaches and owners. The definition of "committed" to playing here assumes political capitulation. It is a widely held belief that has often been used to limit the power and voice of black athletes, one Bennett clearly fights against.

In the face of such potential career consequences, Bennett has exuded only bravery. He seemed so unafraid as he proudly wore a colorful Dashiki on Democracy Now to speak on Palestine and when he appeared on CNN to voice his reasons for participating in the anthem protests.

Steadfast and brave, yes. Yet as his response to his recent and frightening encounter with the Las Vegas police reveals, that doesn't mean Bennett isn't also deeply open with his fears.

"Dear world," he began his open letter. "Las Vegas police singled me out and pointed their guns at me for doing nothing more than being a black man in the wrong place at the wrong time." He said the officer threatened to blow his "fucking head off" if he moved, and handcuffed his wrists so tight, his fingers went numb.

Bennett described feeling "terrified, "confused" and "helpless," as he faced "the real-life threat of being killed." Taking the moment full circle, Bennett affirmed this is why he sits before every game during the national anthem. His protest comes from a place of lived experience, one where visibility and money don't change the reality of being black in America.

His message was clear: If he, a champion football player, can be treated this way, what hope was there for Eric Garner, Mike Brown, Charleena Lyles and the many other unarmed black people targeted, detained and killed by the police and then, essentially, put on trial for their own murders?

Almost immediately the Las Vegas police union shifted into overdrive in an attempt to discredit, humiliate and dehumanize Bennett. The attacks on his character won't silence Bennett though, as co-founder of Black Lives Matter Patrisse Cullors said of the player: "He’s one of our best. He’s living in the legacy of Muhammad Ali. We are really lucky to have Michael Bennett in this generation."

In being unbowed, in speaking out, because he feels he has to, Bennett has done the most radical thing of all — balance professional excellence, worldliness and the constant threat of personal, political sacrifice, all while remaining uncompromising in his activism for black liberation. His bravery and thoughtfulness is demonstrated in the balancing act itself.

"Nothing really matters if -- how many touchdowns I score, if another black kid is shot and killed," Bennett told Democracy Now in February. "Doesn’t matter how many sacks I get, if the education system is unfair for black youth or people of color."

For Michael Bennett, his legacy is one of resistance.