After eight years of claiming to be a victim of his administration, Wall Street comes courting the ex-president 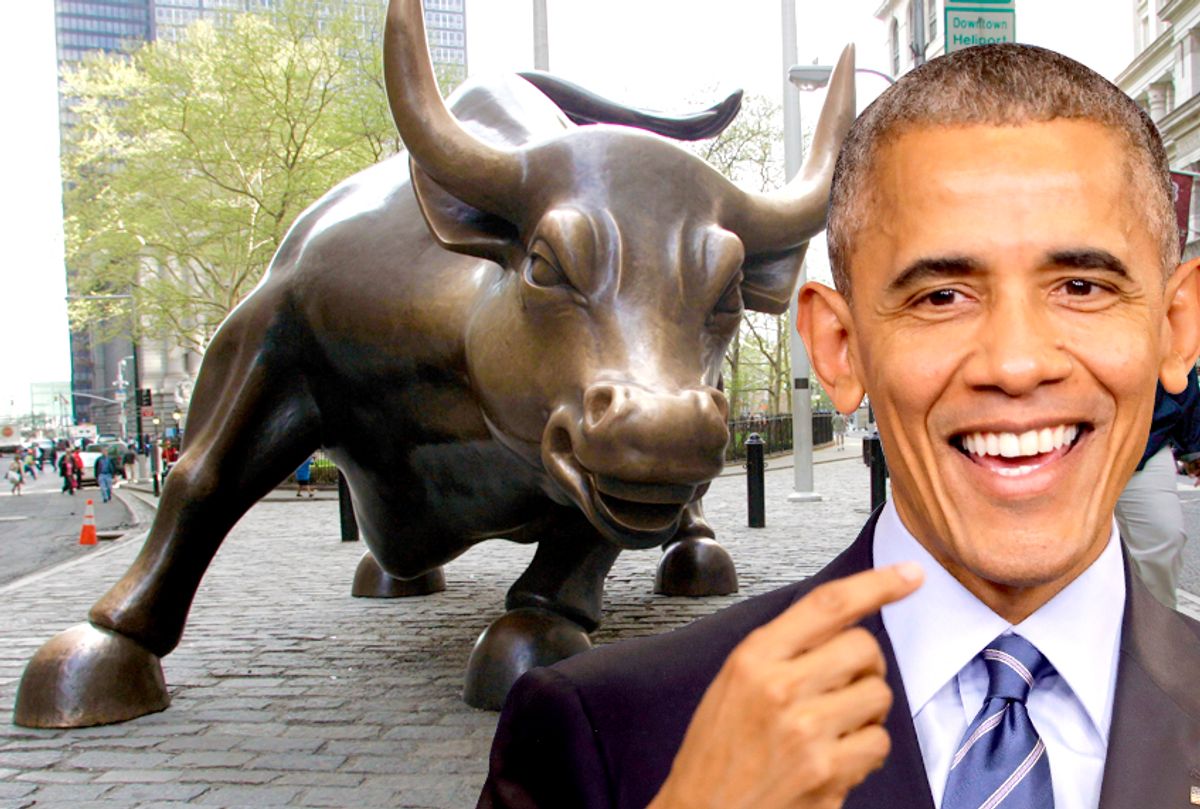 A former president is planning a Wall Street speaking tour. The statement, in 2017, isn't truly surprising; one of last year's presidential candidates came under fire for giving speeches before Wall Street crowds. The other candidate — who eventually won — is filling his administration with financial sector alumni.

And yet, people are upset that Barack Obama is making these plans, suggesting that the ex-president is selling out his political ideals, reflected in his two terms in the White House, for a four-figure speaking deal. When Bloomberg jumped in on the story, they wrote about Obama's "new work with banks," making it seem that he would be engaged in more than just delivering remarks and stories and walking away.

The president's speaking tour, Bloomberg noted, will take him to some of the top hedge funds on Wall Street — last week, it was the Carlyle Group; next week, it will be Cantor Fitzgerald — and bank him $400,000 a pop, which the Obama Foundation has said could be going to fund the foundation's social welfare goals.

Wall Streeters themselves appear to have tapped into a remarkable well of forgiveness for the president, who was demonized by the industry for eight years. Here's a former financial sector Obama ally, saying something that literally no one else said during his time in office.

'He was the president of the entire United States — financial services are under that umbrella,' said former UBS Group AG executive Robert Wolf, an early supporter who joined the Obama Foundation board this year. 'He doesn’t look at Wall Street like, "Oh, these are individuals who don’t want the best for the country." He doesn’t stereotype.'

Remember that in his first term, Obama notably clashed on live TV with Anthony Scaramucci, the former Wall Street executive who spent less than a fortnight in the Trump administration as White House communications director. In that exchange, Scaramucci said that Obama was "whacking us with a stick."

For eight years, Wall Street operated under the assumption that the president hated and scapegoated the financial sector. In 2009, TV host Jim Cramer said that Obama had a "radical agenda" that included the "greatest wealth destruction" that he'd ever seen. Cramer also said the Obama Administration was "amateur hour at our darkest moment," that represented "capitalism vanishing."

Even in Monday's Bloomberg article, it was clear the scars had still not healed.

Obama’s relationship with Wall Street hasn’t always been good. Bankers still boil over with rage about him, wincing over his 2009 line about fat cats as if the wounds were fresh. But his Justice Department prosecuted no major bankers for their roles in the financial crisis, and he resisted calls to break up the biggest banks, signing a regulatory overhaul that annoyed them with new rules but didn’t stop them from pulling in record profits.

In 2012, a hedge fund leader told the New Yorker that Obama "has a philosophy of disdain toward wealth creation. That’s just obvious, O.K.?" The reality was, of course, that he did nothing that really significantly hurt the industry.

In the end, two factors come into play. A former president collects a paycheck by delivering speeches on, well, whatever he wants, really. And employees of the big banks — one of the only groups to come out of the 2008 recession better off than they were before it — can enjoy their power trip by saying they can throw down enough money to get the former leader of the free world.

Capitalism is alive and well.