Blue is not a race

Defending law enforcement is one thing; describing police as a mistreated minority is offensive and dangerous 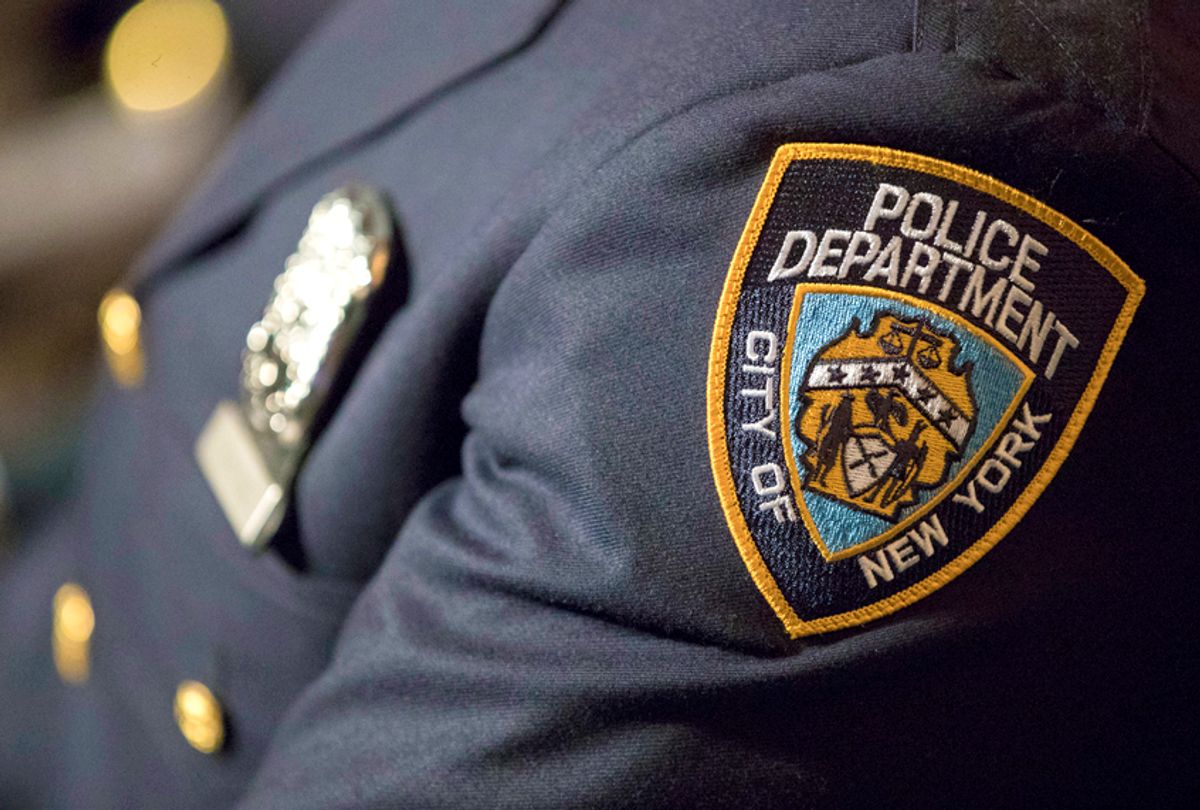 Last month, the Sergeants Benevolent Association (SBA), a major New York City police union, released a video entitled "Blue Racism." The video quotes Martin Luther King's "I have a dream" speech, to argue that police are discriminated against based upon their membership in the "blue" race.

“I’m a minority, as this strange form of racism continues to engulf the country,” the video states. “Because I am blue, increasingly, I am vilified. They don’t even label me based on being African-American, Latino, Asian, Caucasian and so on. They tend to see an even broader stereotype through an even more racist lens. When they look at me, they see blue.”

To be clear, “blue” is not an oppressed racial group — but in the current political context, this claim holds power. The claim of blue racism forms part of a broader strategy that frames the police as victims of violent discrimination, rather than the black and brown communities they claim to serve and protect.

Law enforcement and conservative politicians can use the language of “blue racism” to justify impunity for police officers in the face of continued police brutality and hostility to racial justice activists. The Trump Administration’s racist rhetoric and actions condoning police violence lends credibility to the argument that the police are a marginalized group that need to protect themselves — possibly using deadly force.

The premise of "Blue Racism" cannot be separated from the Trump Administration’s August 28 decision to give police military equipment that had been prohibited by the Obama Administration. Attorney General Jeff Sessions described these weapons — such as armored vehicles, grenade launchers and bayonets — as “lifesaving gear.” President Trump has also made clear that the nation’s highest office approves of police brutality. At a July speech to law enforcement officials in Long Island, Trump instructed officers to be cavalier in their interactions with civilians. “Like when you guys put somebody in the car and you’re protecting their head, you know, the way you put their hand over? Like, don’t hit their head and they’ve just killed somebody — don’t hit their head. I said, you can take the hand away, O.K.?”

These comments drew laughter and cheers from the assembled crowd.

Under Sessions’ leadership, the Department of Justice (DOJ) has begun ramping up racist policing and drug war policies based on secret recommendations from an (also secret) law enforcement committee. Sessions has already instructed prosecutors to return to mandatory minimum sentencing and seek the lengthiest sentences in drug cases. He has also instructed law enforcement to increase their use of civil asset forfeiture, through which cops can seize property and cash from suspects, regardless of whether they have been charged with any crime. At the height of the War on Drugs, police often used directives such as these as justification to brutalize black and brown communities. Now claims of “blue racism” may be used to justify violence as a means of self-defense.

America’s history of racist policing adds another level of irony to the claim made in "Blue Racism" that “racism of any kind will never be tolerated.”

American police have always prioritized some lives over others — this racial bias was revealed most recently when examining the disparity between policing strategies during the "alt-right" gathering in Charlottesville and any one of scores of Black Lives Matter protests. Although it was no surprise that the neo-Nazis who congregated last month in Charlottesville were heavily armed, police were unprepared to protect the public from deadly violence and repeatedly stood by as white supremacists beat counter-protesters. In contrast, police have cracked down on racial justice protests, where viral images of police in military gear intimidating unarmed protesters (in Ferguson and beyond) are all too common.

In recent years, police forces across the country have drawn protest and outrage over anti-black police killings, and the NYPD is no exception to the rule. In October 2016, NYPD officers fatally shot Deborah Danner, a 66-year-old mentally ill black woman. Police were called for mental health support, but instead, one of the responding officers shot Danner, claiming she was armed with a wooden bat. The officer responsible has since been charged with murder, a rare decision lambasted by the SBA. In 2014, NYPD officers used an illegal chokehold to kill Eric Garner, an unarmed asthmatic black man whose refrain of “I can’t breathe” became a rallying-cry for Black Lives Matter.

Anti-black police violence is not just a recent phenomenon. In 1984, the NYPD fatally shot Eleanor Bumpurs, a black woman in her 60s, in the course of attempting to evict her from her apartment for unpaid rent. Rodney King’s severe beating by Los Angeles police officers in 1991, and the following impunity for officers responsible, famously spurred widespread protests.

The NYPD has been widely criticized for systemic racial discrimination — namely its racial profiling and stop-and-frisk practices. Across New York City, the vast majority of police stops since 2002 have been of black or Latinx individuals, and nine out of ten folks stopped were released with no further action. In 2016, 52 percent of those stopped were black, 29 percent were Latinx and 10 percent were white. In 2013, Judge Shira Scheindlin ruled that the NYPD’s stop-and-frisk practices were so discriminatory as to be unconstitutional.

This is not the first time police have tried to define themselves as an endangered group. The SBA’s charges of blue racism follow on the heels of a spate of “blue lives matter” bills that have sprung up across the country, as a backlash against the Movement for Black Lives’ efforts to develop greater police accountability. Last year, Louisiana became the first state to pass such a bill, which treats attacks on police officers as a hate crime. Similar legislation has popped up in at least 14 states, including New York, with the second bill passing into law in Kentucky earlier this year.

The claims upon which “blue lives matter” legislation rest are inaccurate and misleading. In March, Jim Pasco from the Fraternal Order of Police (America’s most powerful police union), told the Huffington Post that targeted police violence is “growing at exponential rates.” The number of fatal shootings of police officers did rise significantly in 2016 to 64, as compared to 41 in 2015. Yet there were 73 fatal police shootings in 2011, and the number of violent police deaths last year was still lower than the average for the past ten years, according to NPR.

In reality, police officers are already amongst the most legally protected groups, and Blue Lives Matter constitutes political posturing. At the root of “blue racism” campaigns are a ploy to turn the table on peaceful Black Lives Matter activists, blaming them for inciting violence against police officers. This can both reduce public sympathy for the burgeoning movement and justify increased levels of police violence against activists and the communities they aim to protect.

For the SBA and others who do not understand the meaning of race, I will try to lay it out. It is true that race is a social construct and racial groups change over time — meaning that there is not a static definition of what constitutes a race. For instance, in the U.S. we generally consider all people with African ancestry to be black or African-American, regardless of how much European or other ancestry they have. Yet in countries such as South Africa, people with these same roots can be classified as “colored,” which places them a step above black people in the country’s racial hierarchy. While race is a social construct, that does not make it any less powerful — race functions as one of the central axes upon which our society systematically favors some (white people) and oppresses others (people of color).

Police are not a historically or contemporarily disenfranchised group. In fact, the impunity with which police officers have killed black people with no legal repercussions — such as Tamir Rice, Rekia Boyd, Mike Brown and Tanisha Anderson — shows that police are actually systemically privileged in our society so as to operate outside laws by which most of us must abide.

In recent months, our national government has endorsed police brutality, gifted police forces with military weapons, and ramped up policies abused by police forces to racially profile black and brown folks. These same policies are used as justification for police brutality and fatal violence. Police have failed to protect racial justice activists from neo-Nazi violence in Charlottesville, while they harshly cracked down on Black Lives Matter protests with the same military equipment Trump is returning to them. Meanwhile, the NYPD and police forces across the country are labeling themselves as casualties of “blue racism” that exceeds the real racism experienced by actual racial groups — framing police as the true victims in need of protection. This is all part of the same strategy — and we should not underestimate the grave threat posed by this empowerment of police impunity and racist violence.