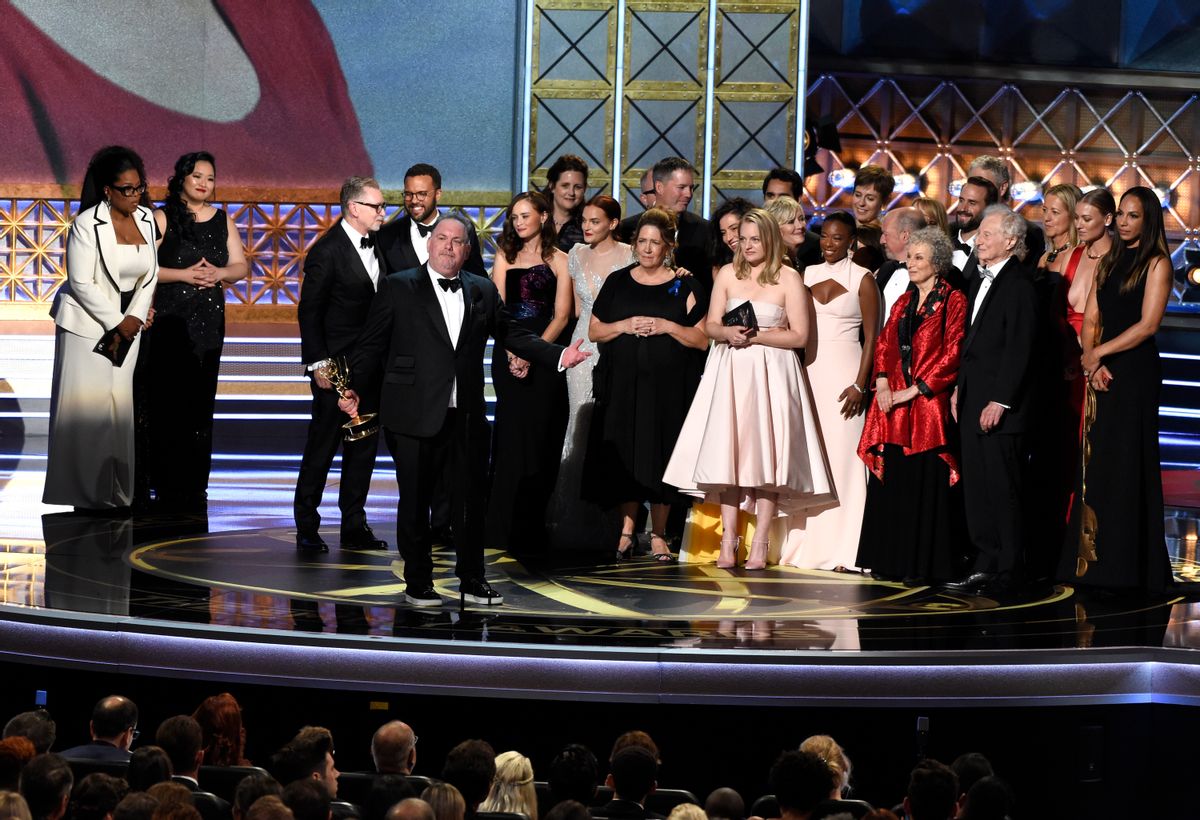 Everything is better on TV, Stephen Colbert assured us at the top of the 69th annual Emmy Awards telecast. For a solid stretch of time, he proved that to be true. Right up until Sean Spicer oozed onto the stage behind a fake podium.

Ah, Emmy. Even your best telecasts somehow find a way to make the nimblest dancers stumble in some way or another. Sunday’s awards show on CBS was no exception, despite the best efforts and relatively smooth execution of the arch, avuncular Colbert.

As the host of a glowingly unexceptional awards telecast, Colbert did his job with aplomb and without generating any highly embarrassing moments except, well, the Spicer thing. Well into a monologue heavy on Trump trouncing, Colbert mused aloud whether anyone would be able to tell just how many people watched the Emmys. Then he called out the former White House Press Secretary to the stage. Spicer emerged, his doughy visage split into a gigantic “oh-my-stars-mommy-I’m-on-the-Emmys-how-did-I get-here-also-I-need-new-underwear” grin. “This will be the largest audience to witness an Emmys, period, both in person and around the world!” he boomed. In the audience, Anna Chlumsky's jaw nearly detached from her skull — understandably so, since this happened only minutes after Colbert did a song-and-dance number including the lyric, “Even treason’s better on TV.”

And the Spicer sputum is the most brazen example of Emmy’s effort to have it both ways. Colbert dismissed Spicer by referring to him as Melissa McCarthy and making a joke about his oh-so-hilarious role as an accessory to propaganda, while the disgraced former press secretary took pictures with celebrities backstage. Was that Colbert's idea or the producers’? (Update: Apparently it was Colbert's.) Either way, not exactly a wise call but not entirely out of context either. Remember that the Emmys exist to burnish television's image, as well as, in a few rare cases, the image of those those clinging to its train. On the downside, people are more likely to recall that moment more easily than Colbert's hosting ability.

In short order, the 69th Emmy Awards morphed into a highly political affair, from Colbert’s musical number reminding us that even the world’s most anxiety-producing topics somehow play better when scripted, to the winners list itself. Colbert pointed out that every show had been influenced by Trump in some way, and this was acutely apparent in the winner’s circle.

The top drama Emmy went to “The Handmaid’s Tale,” cementing Hulu’s arrival as a creative force in the industry and making it the first streaming service to win that honor. “Handmaid’s” also netted Elisabeth Moss the best actress Emmy that has long eluded her, despite her outstanding work on “Mad Men,” and rewarded Ann Dowd with her very first and long overdue win for best supporting actress.

Additionally, Bruce Miller won the Emmy for writing the first episode of “Handmaid’s,” and director Reed Morano also snagged a statue for her work on the series. The multiple victories for the Hulu drama cost HBO’s “Westworld,” which didn’t walk away with a single Emmy on Sunday. (It did land five Creative Arts Emmys, however.) The same fate was suffered by Netflix’s buzzy sleeper “Stranger Things,” FX’s “The Americans” and AMC’s “Better Call Saul.”

HBO’s “Veep,” meanwhile, won Best Comedy yet again and netted yet another best comedy actress Emmy for Julia Louis-Dreyfus, who at this point has enough of those golden ladies to be able to use at least one as a jewelry tree. She set a record last night with six consecutive wins in the category. Six.

Some may argue against the “Veep” victory being political, even though it features the laughable post-White House life of the country’s first female president. “Veep” has won in years that haven’t been anywhere nearly as rancorous as this one. But this current win is for a lesser season for “Veep,” in a category with more creatively adventurous options, among them FX’s “Atlanta” and Netflix’s “Master of None.”

Each of those shows received their due in other categories; “Atlanta” creator Donald Glover won Best Actor in a Comedy Series as well as the Emmy for Best Directing, for the show’s “B.A.N.” episode. Glover even joked, “I want to thank Trump for making black people number one on the Most Oppressed list. He’s the reason I’m probably up here.”

Aziz Ansari shared a comedy writing win with co-star Lena Waithe for the stupendous “Thanksgiving” episode of “Master of None” and ceded his acceptance speech time entirely to her, of which she made stellar use.

Speaking to the LGBT community, Waithe declared, "I see each and every one of you. The things that make us different, those are our superpowers — every day when you walk out the door and put on your imaginary cape and go out there and conquer the world because the world would not be as beautiful as it is if we weren't in it.”

Waithe’s win made her the first black woman to win a writing Emmy in the comedy series category, ever. And this was one example of Emmys' attempt to balance legitimately great choices that also made history, with frustrating old habits that make it entirely, boringly predictable.

In addition to Waithe’s highly satisfying win and Glover’s — making him the first black person to win an Emmy Outstanding Directing in a Comedy Series, Sterling K. Brown took home the Best Actor in a Drama Emmy for his moving work on NBC’s “This Is Us.” Brown is the first African-American to triumph in that category in 19 years. Glover’s acting win, by the way, is the first to be achieved by a black actor since 1985.

Meanwhile, Riz Ahmed’s victory in the Outstanding Acting in a Limited Series category for his work on HBO’s “The Night Of” makes him the first man of Asian descent to win an Emmy. The only other Asian actor to take home an Emmy in the entire history of the awards show? Archie Panjabi for “The Good Wife,” in 2010.

All of this signified progress to be certain, and the producers pointed this out by dedicating a small segment to strides the industry is making in terms of improved inclusivity, although the data in a few recent studies indicate that not much has changed. But Emmy is not about data, other than the kind crunched by Ernst & Young.

No, no — Emmy is a night for television to congratulate itself and persuade the audience of its worth.

Colbert gamely played along with this idea. Opening with a giddy exchange with “Black-ish” star Anthony Anderson (which is how Colbert referred to him) and “Mom” star Allison Janney (whom Colbert referred to as “Black-ish" star Allison Janney), Colbert soft-shoed his way through a backlot, tapping past a couch lined with the stars of “This Is Us,” zipping through a scene from “Archer” and stopping through a scene from “Stranger Things” to give Eleven a twirl.

His moment with Selina Meyer from “Veep” should have heralded what was to come on the main awards front ("Imagine if your president was not beloved by Nazis," Julia Louis-Dreyfus sang in character). Ditto for the number’s showstopper, a team of high-kicking dancers wearing the red robes and caps of “The Handmaid Tale,” who removed their robes to reveal sequined leotards with plunging necklines and to also reveal that half of them were men. It was fantastic, although the best moment was the mighty interlude featuring Chance the Rapper paying tribute to TV classics while urging people to get off their couches and go protest.

Then came the monologue, which eventually launched into an extended romp skewering Trump, surprising no one. Colbert went for the lowest hanging fruit, needling Trump over his obsession with the Emmys and specifically, the fact that he never received one for “The Apprentice.”

“Why didn’t you give him an Emmy?” Colbert joked. “I tell you this: If he had won an Emmy, I bet he wouldn’t have run for president. So in a way, this is all your fault.”

None of what Colbert said during that excerpt was new to anyone who has been watching him since CBS chairman and CEO Les Moonves allowed his producers to take the muzzle off. He was just edgy enough to maintain his reputation but not to the point that the boss would call him into the office. (For instance, in pointing out that Emmy loves “morally compromised anti-heroes,” he said of Trump, “You like Walter White — he’s just Walter Much Whiter!”

Waithe’s uplifting speech received one of a couple of standing ovations during Sunday’s telecast. Another was the surprise reunion with “Grace and Frankie” stars Lily Tomlin and Jane Fonda, joined onstage with their “9 to 5” co-star Dolly Parton, which ended up being adorable, even though Parton seemed slightly uncomfortable with Tomlin and Fonda’s potshots at the administration. Another such acknowledgement of industry royalty came when Norman Lear emerged with Carol Burnett on his arm.

Naturally, Emmy did its usual share of rubberstamping, including John Lithgow’s win in the drama supporting actor category for Netflix’s “The Crown.” The Cheeto in Charge also inspired a breakout year for NBC’s “Saturday Night Live,” which won Best Variety Sketch Series; a second Best Supporting Actress in a Comedy statue for Kate McKinnon and a Best Supporting Actor in a Comedy Emmy for Alec Baldwin (who quipped, “Mr. President, here is your Emmy”); and a directing Emmy for Don Roy King.

Netflix’s “Black Mirror” won two Emmys: One for Charlie Brooker’s script and the other for best TV movie. And HBO’s “Last Week Tonight with John Oliver” emerged victorious again in the best variety talk category as well as for best writing for a variety series.

All of this was more or less expected and barely compares to the vexation of the virtual sweep of HBO’s “Big Little Lies” in Limited Series categories. Its win is more evidence of the industry nearly dislocating a shoulder while patting itself on the back. The miniseries categories are weaker in most years, but not this time: It bested FX’s “Feud: Bette and Joan,” which went home empty-handed; “The Night Of” and even more confusingly, FX’s “Fargo.”

Reese Witherspoon starred in and produced “Big Little Lies,” and she’s a gem. But the self-aggrandizing blather in their acceptable speeches about how important this miniseries is in terms of portraying women leaves out the part that it celebrates a segment of the female population that is in no danger of being underrepresented on TV: obscenely wealthy white women. You know, the folks Colbert actually should be blaming for putting us where we are now.

Later on, when Brown was in the midst of thanking his “This Is Us” team and the men and women who paved the way for his hard-earned success, the orchestra cut him short with loud music, refusing to back off even as he stood his ground. The Emmys ended on time and easily could have gone a few seconds over to accommodate an actor acknowledging the feat he achieved for himself and on the shoulders of others. Unfortunately for Brown, handsome though he is, he is not a statuesque blonde movie star. And despite what Colbert was selling, like so many images in this Trump-themed existence of ours, this did not play well on TV.