Jordan Klepper's "The Opposition": A "Colbert Report" for the Infowars era 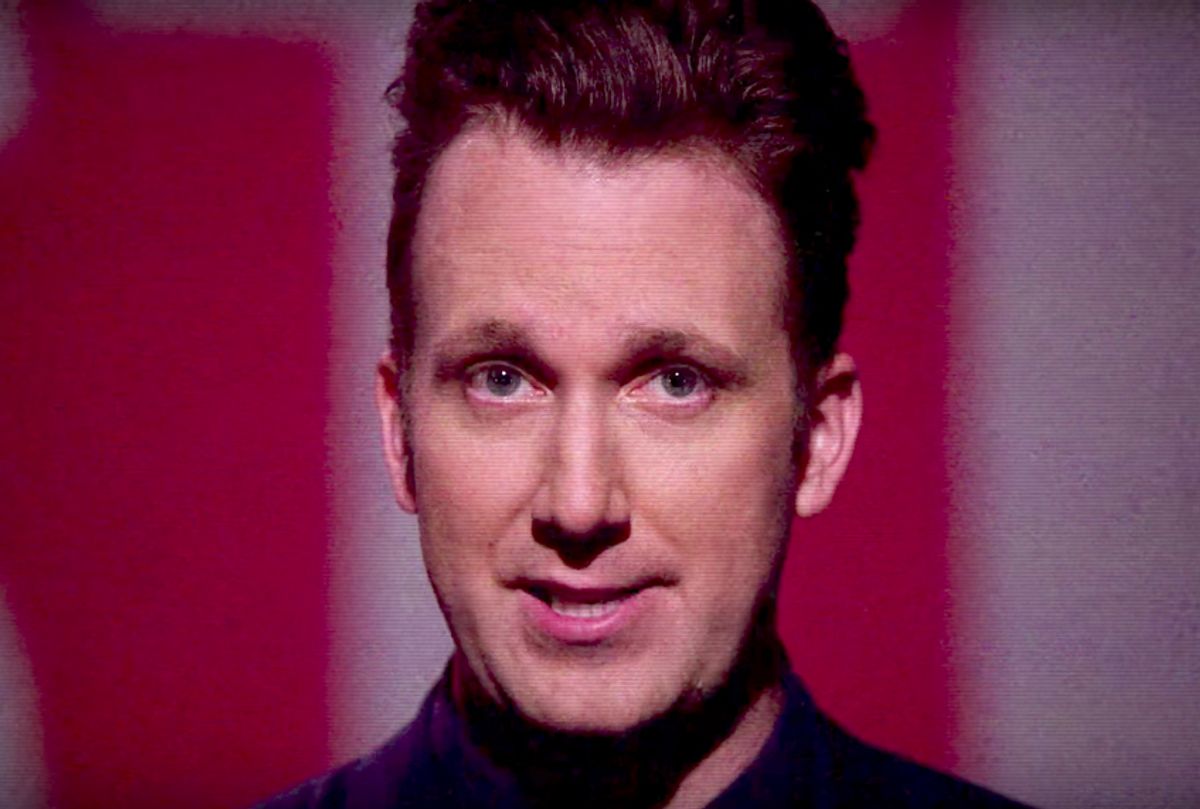 Jordan Klepper is stepping into a slot made possible for him by the establishment, the liberal media and a series credited as the originator of the “fake news” label. The former correspondent for “The Daily Show with Trevor Noah” is well aware of the expectation that comes with taking the 11:30 p.m. post-“Daily Show” slot, a place originated by Stephen Colbert and “The Colbert Report” and held for a very short time by Larry Wilmore and “The Nightly Show.”

Klepper’s predecessors were very much creations of their time, though perhaps “Nightly” was a bit too uncomfortably attuned to the social strife it attempted to laugh at.

As such, he’s attempting to continue that tradition in a way that’s apt and in his wheelhouse with “The Opposition w/ Jordan Klepper,” airing on Comedy Central Mondays through Thursdays at 11:30 p.m. beginning on September 25. It, too, is a series hooked into the culture’s distillation of current events, albeit reflective of misinformation and hyperbole as opposed to fact and data, a parody of a newsmagazine constructed around a feeling of “alt-“ and “anti-“

And for Klepper, “The Opposition” is a perfect fit for the times and for who he is as a comedian. As the host of his show Klepper will play an outsized parody of himself, much as he did on “The Daily Show,” “somebody who is a little bit of a know-nothing, but wants to make some amount of change,” Klepper said in a recent interview with Salon. “We're taking that and we're adding just 10 times more paranoia to it and giving him a platform.”

“This isn't a one-to-one to InfoWars or Breitbart, but there is a point of view that is out there that is an outsider who is anti-progress or was anti-mainstream culture and media,” Klepper explained, adding that he hopes “The Opposition” will speak to the reality gap that exists right now in America. “We're not understanding some of the reference points people have, and we're not understanding where some of this information is both created and distributed and how some of these ideas gestate.”

Over the summer Comedy Central granted Klepper something of a test run with his hour-long special "Jordan Klepper Solves Guns." By now, Klepper’s vision has gelled enough for Comedy Central to reveal the team of self-described “Citizen Journalists” surrounding Klepper, a group of newcomers comprised of  Tim Baltz, Laura Grey, Aaron Jackson, Josh Sharp, Kobi Libii and Niccole Thurman. The fact that Klepper has a staff of correspondents already differentiates “Opposition” from what Stephen Colbert previously did on “The Colbert Report,” although right off the bat Klepper weathered a few knocks for adopting a similar tactic of playing a right-wing version of himself.

Klepper diplomatically paid homage to his predecessor when he was asked about it. “Colbert showed us that creating a character and filtering a show through a point of view is something that was sustainable and you could do it,” he said. “But what we’ll see this as, is that these characters have completely different worldviews.

“The world has changed dramatically even since the time Stephen was on and the time we’re on. Things like Bush, O'Reilly and neocons, the Tea Party, those things have now either been fired, they've been shamed and one of them is oil painting in a bathtub,” Klepper continued. “Donald Trump has shifted the landscape and the feeling. The patriotism that existed in perhaps an O'Reilly type doesn't exist in Alex Jones. There's a nationalism there.”

And recent evidence has proven that even Colbert himself isn’t immune to the siren lure of Hollywood and the mainstream.

On Emmys night, the telecast’s emcee Stephen Colbert brought former White House Press Secretary Sean Spicer onto stage for a gag that lasted all of 10 seconds and set off a frenzy of criticism that’s lasted for days. Following the telecast the host of “The Late Show with Stephen Colbert” and an assortment of celebrities smiled brightly for photos with Spicer, a man who spent months badly selling bald-faced lies to the American people.

This is a move more suitable for the character Colbert created for “The Colbert Report,” but it’s doubt even he could have gotten away such a thing. And it’s a fascinating coincidence that Klepper is stepping in the slot that old Colbert dug out and paved for him and for Wilmore.

But it’s Wilmore’s cancellation that haunted Klepper, somewhat, when his show was originally announced. And in that sense, Klepper had a bit of practice in creating a measure of separation occurring between the performer and his character.

“I understand that I'm a white guy hosting a show,” Klepper said. “Jordan Klepper the person knows that to do that, you have to have diversity of points of view and to speak form them. Jordan Klepper the character thinks that's great and thinks that in America, the white male is somebody who has been in the minority for too long, even though they're in the majority and in control of most things. That's going to be fun to play with. That's happening out there and I think the frustration that people might have to see me named there comes from that place. I'll get to play with somebody who also doesn't see why it's such a big deal. But Jordan Klepper the person understands why it is.”

The greater risk that “The Opposition” may have to surmount is the risk of pilling anxiety, anger and negativity on top of the existing mountain of frustrations viewers deal with during the day. But Klepper is hoping that even as his show lampoons and inflates the sense of paranoia created by alt-right pundits and outlets, it will serve a positive purpose.

“What is great and what is fun about this engine is these alternative sites and mindset really sees itself as only in America, and also exposing the things that people don't want to talk about,” Klepper said. “For us, it's great, because I do think there's a lot of stuff out there, really infuriating stories that people aren't talking about.

“We get the fun engine and the mask of, ‘These are our stories, these are our American stories and the media doesn't have the guts to tell you!’” he added. “But through that hopefully we can get real issues, real people, real Americans or stories that people just aren't talking about it. We're excited about exploring that.”

It’d probably be silly to wonder at this point how long the content that’s inspired “The Opposition” will continue to dominate the culture, if only to speculate how long Klepper’s angle can be relevant. Sadly — or depending on how one sees it, happily — it looks like he’ll be able to get a few seasons out of this take, if not longer.

“I would love for us to be able to sit down and see both sides of an argument and move forward in a bipartisan manner. I hope that happens tomorrow,” Klepper said.  “But I don't think we are getting closer and closer to talking to one another. I think we are getting farther and farther away. If we do reach that point where we can come together and the world completely shifts, hallelujah, great news.”

Until then, he’ll have no shortage of content to parody and “oppose.”