"I know you think that’s a picture of me, kissing Sean Spicer. But in the spirit of Sean Spicer, no it isn’t" 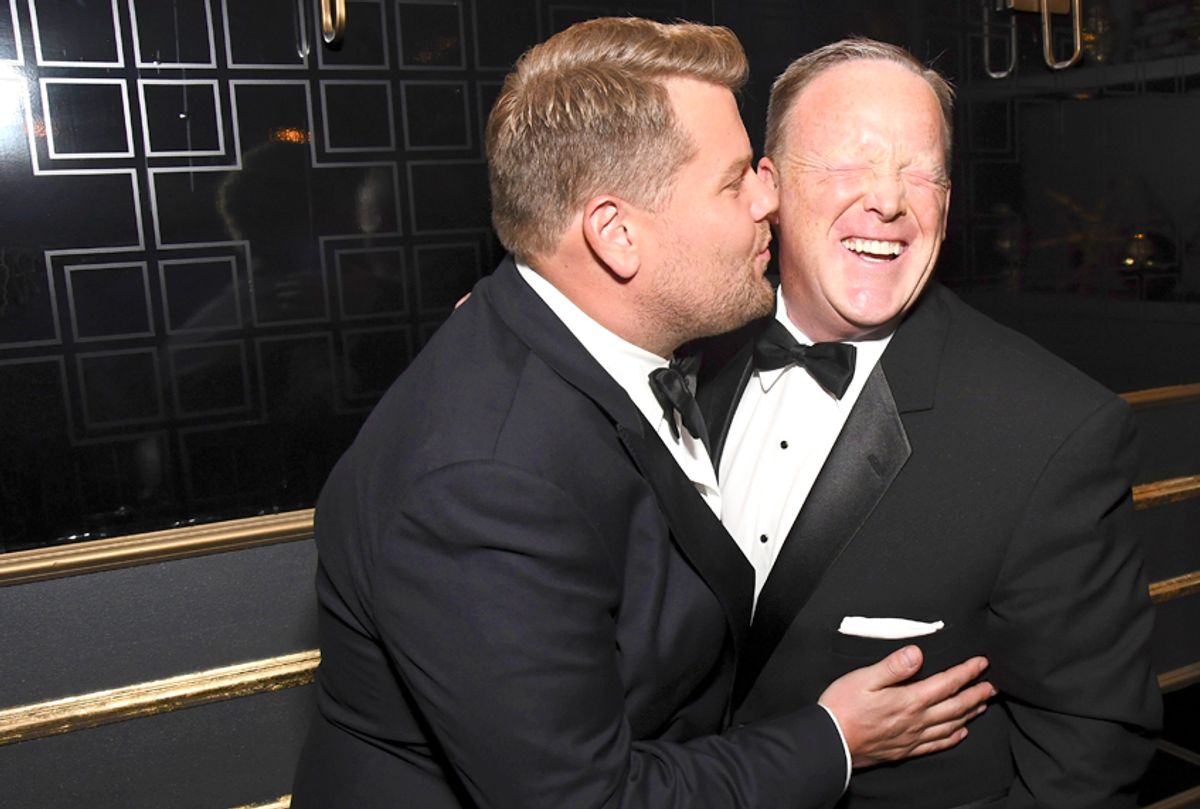 As some of you may remember — and you'd be forgiven if you didn't — the Trump administration cast-off made a surprise appearance at Sunday’s 2017 Emmys award ceremony. Spicer waltzed out onto the stage in the midst of Steven Colbert’s monologue on Melissa McCarthy’s famous rolling press lectern. Given his past, it was a remarkably tone-deaf moment.

Following the ceremony, Spicer reveled in the limelight, taking pictures with countless celebrities and admirers. One of those stars was Corden, who posted a cheeky picture of himself giving Spicey a smooch. Witness below:

Rather than receiving anticipated laughs, Cordon's photo was met by an outraged online chorus, many of whom felt the host was rewarding Spicer’s "bad behavior."

Fuck James Corden, next time you have a heartfelt monologue on late night, we will all remember you kissing Sean Spicer.

James Corden posing with Sean Spicer is no surprise #YesAllWhitePeople

But during last night's opening monologue, Corden owned up to his actions.

“I think people are forgetting that this man lied to the American people and should not be embraced. These Hollywood phonies kissing up to Sean Spicer are disgusting, I mean who does that?" Corden joked, as the controversial photo appeared on the screen.

"Anyone ever have that feeling when you get a little drunk and wake up the next morning and think oh god, who did I kiss last night? Understandably, some people have been disappointed by this photo, and in truth, I am disappointed by it as well. I’ve been reading a lot of harsh comments on Twitter today, and I hear you loud and clear. So much so, I’m really starting to regret that carpool karaoke we’ve taped with Steve Bannon."

After listing off a slew of celebrities he had once kissed — Bryan Cranston, Allison Janney and Harry Styles, to name a few — Corden finished, "basically what I’m saying is, I need to learn how to shake hands." Fine. Sure. As long as those hands never spent time in the Trump administration.