Milo claims he was planning a "Free Speech Week" and Berkeley shut it down. Evidence for this is strangely lacking 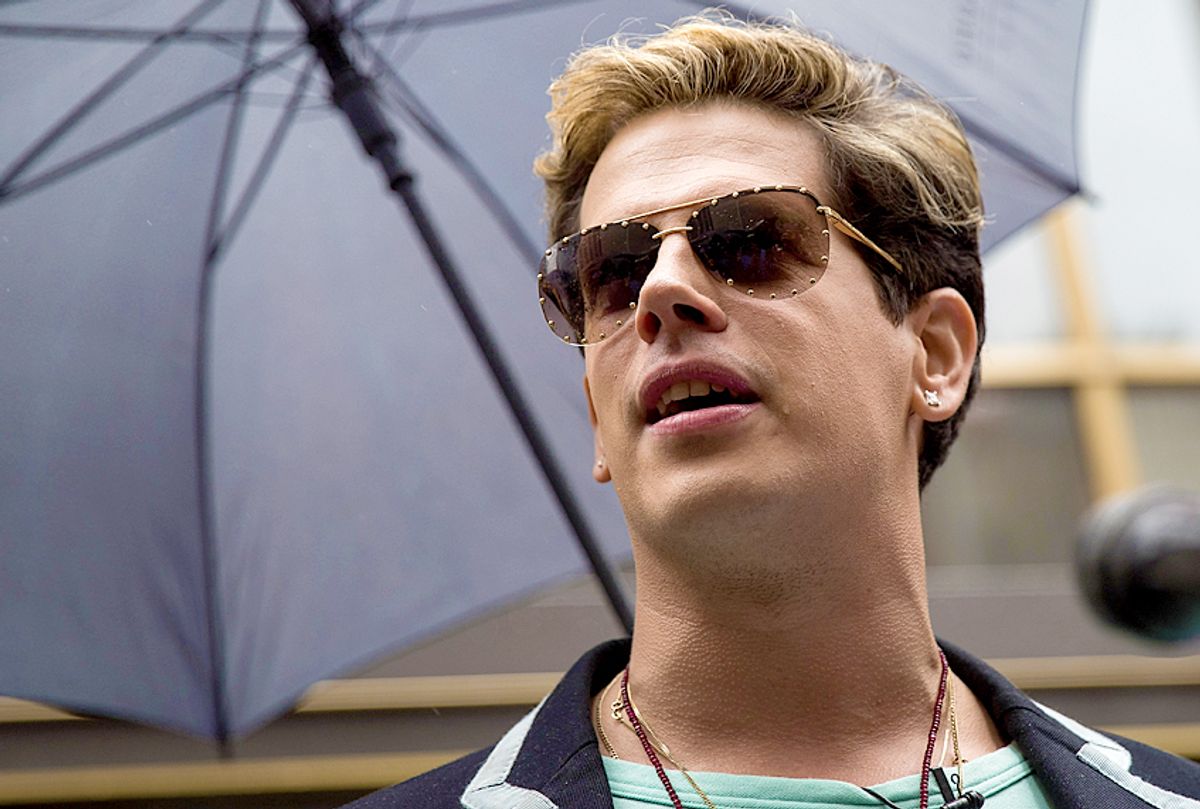 What do you do when your arguments can't be defended on their own merits? It's a sticky question for those in and around the "alt-right," as it tries to grow past meme-ifying pictures of Pepe the Frog and trolling feminists on Twitter. The solution that has been developed over recent months has been for "alt-righters" and their allies to paint themselves as victims who are -- sing it with me now! -- being denied their free speech rights by a cabal of censorious leftists and "antifa" street fighters.

As a marketing strategy, it's been fairly successful. By shifting the conversation away from their actual ideas towards some trumped-up debate over "freedom of speech," the Pepe people get to have it both ways: They can imply that their ideas are so persuasive and powerful that the left is terrified and can only respond with censorship and violence, while also avoiding having to discuss what those mysterious ideas actually are.

One problem with the strategy is that it requires convincing the public that you're being persecuted, which professional troll Milo Yiannopoulos — with help from Fox News and Breitbart — is trying to do, arguing that the University of California at Berkeley has sought to crush, suppress or shut down his efforts to hold a "Free Speech Week" on campus.

Salon's investigation into this claim suggests, however, that Yiannopoulos' allegations of censorship are, at best, overstated. Furthermore, there is legitimate room for doubt about whether Yiannopoulos' proposed "Free Speech Week" was ever intended to happen at all.

After protests last January at a Yiannopoulos event in Seattle led to a right-wing couple shooting a leftist protester, officials at Berkeley canceled a similar event scheduled on their campus in February, citing security concerns. This led to a bunch of wailing and moaning from conservatives, including Donald Trump, about "free speech." In April, backed by $12 million supposedly given to him by mystery investors, Yiannopoulos declared he would host some kind of "free speech" event of his own in Berkeley.

In August, Yiannopoulos announced that his "Free Speech Week" would take place on Berkeley's campus, birthplace of the legendary Free Speech Movement of the early 1960s. Yiannopoulos promised it would be a four-day extravaganza and said, "The free speech movement is being reborn at Berkeley, next month, by us."

From the get-go, however, there have been various problems and unanswered questions, starting with the student group that was actually supposed to host Free Speech Week. This group, called the Berkeley Patriot, didn't exist at all before July. Its site has five blog posts, its Facebook page shows no signs of real community and its Twitter account has 16 followers and no tweets. Both the blog and the Facebook page were started on Aug. 25 — shortly after Yiannopoulos announced he was working with this group to stage a major event on the Berkeley campus.

Despite being a tiny organization with no visible history, Berkeley Patriot had a huge ask: It not only wanted to hold events in the usual rooms offered at no charge for student events, but also wanted to rent Zellerbach Hall and Wheeler Auditorium, two of the largest venues on campus. The former of those, for instance, seats around 2,000 people and is mostly used for concerts and major performing arts events. According to the university, Berkeley Patriot was given three deadlines — Aug. 18, Aug. 25 and, finally, Sept. 15 — to sign a contract and pay the $65,000 rental fee for the two auditoriums. The students failed to do that.

“If it was so important to them to have access to these indoor venues, what have they been doing for the last five weeks?" Berkeley spokesman Dan Mogulof asked Salon.

In a published diatribe accusing Berkeley officials of deliberately seeking to shut down his event, Yiannopoulos claimed that the delay happened because Berkeley Patriot students asked questions about the contract and were ignored for three weeks. He also claimed there is a "paper trail of dozens of emails" to prove this, "available to journalists upon request."

When Salon requested these documents, however, Yiannopoulos personally responded with a one-sentence statement that included derogatory terms for both female genitalia and redheads. This failed to hurt anyone's feelings at Salon, as the intended target admits to dying her hair red and believes female genitalia to be excellent human organs.

Unfortunately for Yiannopoulos, the request was sent not just to his personal email, but also to his press contact. His agent sent Salon a zip file containing exactly five emails (rather than the promised dozens) that only date back to Sept. 12. These emails show no evidence that Berkeley administrators ignored student requests. In fact, UC Berkeley's interim vice chancellor, Stephen Sutton, indicates that the parties have "repeatedly discussed" the school's requirements for hosting these events.

The emails do show that Berkeley Patriot refused to sign the contract until roughly 10 days before the supposed event. Student organizers apparently demanded a different, nonstandard contract, as Yiannopoulos has also indicated and only at the last minute gave up and agreed to sign the university's standard agreement. But Berkeley Patriot did not pay the rental fees in time and did not secure the venue.

A request for the purported "dozens" of emails was also sent to Mike Wright, the listed student organizer of Free Speech Week, but he did not respond. The request was sent after Yiannopoulos published an Instagram post asking his friends and followers not to talk to Salon's reporter.

One of the requirements requested by Sutton, the Berkeley vice chancellor, was a list of the event's speakers, with confirmation that they were actually going to attend. That issue has become another interesting wrinkle in the story of Free Speech Week. On Sept. 15, the Chronicle of Higher Education reported that it had obtained a list of supposed speakers for Free Speech Week but that "several of the people on the list say they will not be speaking at the event, and in some cases weren’t even contacted about speaking there."

In his list of accusations, Yiannopoulos calls this "a preliminary speaker list," an inadvertent confirmation that neither he nor Berkeley Patriot had done even the bare minimum to put together a supposedly major public event that was, at that point, only one working week away. In an email sent on Sept. 13, student organizer Mike Wright admitted that the group did not have the speaker confirmations.

"Is this real?" seems to be the question of the day. In his interview with Salon, Mogulof framed the collapse of Free Speech Week largely as a matter of disorganization and incompetence, suggesting that the students of Berkeley Patriot may have bitten off more than they can chew.

It is worth noting, however, that while Berkeley Patriot is small, it was working closely with Milo, Inc., the multimillion-dollar organization Yiannopoulos launched in April. There are also indications that Yiannopoulos and the student organizers had access to legal counsel during their discussions with the university. So this tiny group, which seems to have come into existence just in time to be the official host of this event, has considerable resources. That could be said to cast doubt on the proposition that this was a bunch of college kids who couldn't fill out paperwork on time.

Perhaps it's true that Berkeley threw up a bunch of bureaucratic obstacles in an attempt to shut down a conservative-themed gathering. But Salon's attempts to gather evidence of that -- evidence Yiannopoulos insists is available -- came up with nothing. (As mentioned earlier, Yiannopoulos actively encouraged his Instagram followers not to talk to Salon.)

There's an alternative possibility, too obvious to ignore: This entire event was created to fail, so Yiannopoulos could declare himself the victim of "political correctness" or left-wing censorship.

On Aug. 23, after Berkeley's chancellor announced the booking of Ben Shapiro and Yiannopoulos, both former Breitbart writers, Yiannopoulos seemed skeptical, posting on Facebook, "Let's hope Berkeley sticks to this commitment to free expression."

Shapiro's event, hosted by the College Republicans, was not cancelled. He came to the campus on Sept. 14. There were some protests and a few arrests, but no rioting. The "alt-right" was denied its narrative about being victimized by the violent, censorious left.

That's likely what would have happened if Berkeley Patriot had gotten its paperwork and speaker list together on time — some protests and shouting, a couple of scuffles and possible arrests, but no serious violence and no real opportunity to play the victim. People would have filed politely into an auditorium, been bored for a few hours and gone home.

Instead, Free Speech Week is going to held largely outdoors — there are now a few scheduled events that Berkeley Patriot was mysteriously able to organize. Yiannopoulos' event is now likely to attract a larger crowd of "alt-right" types, all fired up because they've been told they are being silenced or "censored" by liberal bureaucrats. They may even be under the false impression that these outdoor events are not authorized by the university. (They are.) These angry "alt-right" types will almost certainly find counter-protesters to meet them — and they'll all be outside instead of sitting quietly in auditoriums.

On Monday, Yiannopoulos posted video laying out the accusation that Berkeley was censoring him. The alleged censorship had occurred on Friday afternoon, so over the weekend, either Yiannopoulos or someone close to him paid to have a professional video produced that is cleverly edited and features multiple interviews. It also includes images of protests turning into riots, edited to seem maximally alarming. It's a picture-perfect work of propaganda, designed to get the "alt-right" fanboys stirred up.

The "alt-right" thrives on the idea that it is being oppressed by violent leftists, a narrative that was in danger of dying out after a white supremacist killed a peaceful counter-protester and injured many others with a terrorist-style attack in Charlottesville. With his Berkeley event, Yiannopoulos has created and nurtured an atmosphere of right-wing grievance and anger — and now his gathering will happen outside, on the streets, with maximum opportunity for violent clashes between right-wing racists and counter-protesters. You might almost think that was how he designed it.