Bill O'Reilly plans a big comeback — and he may get one 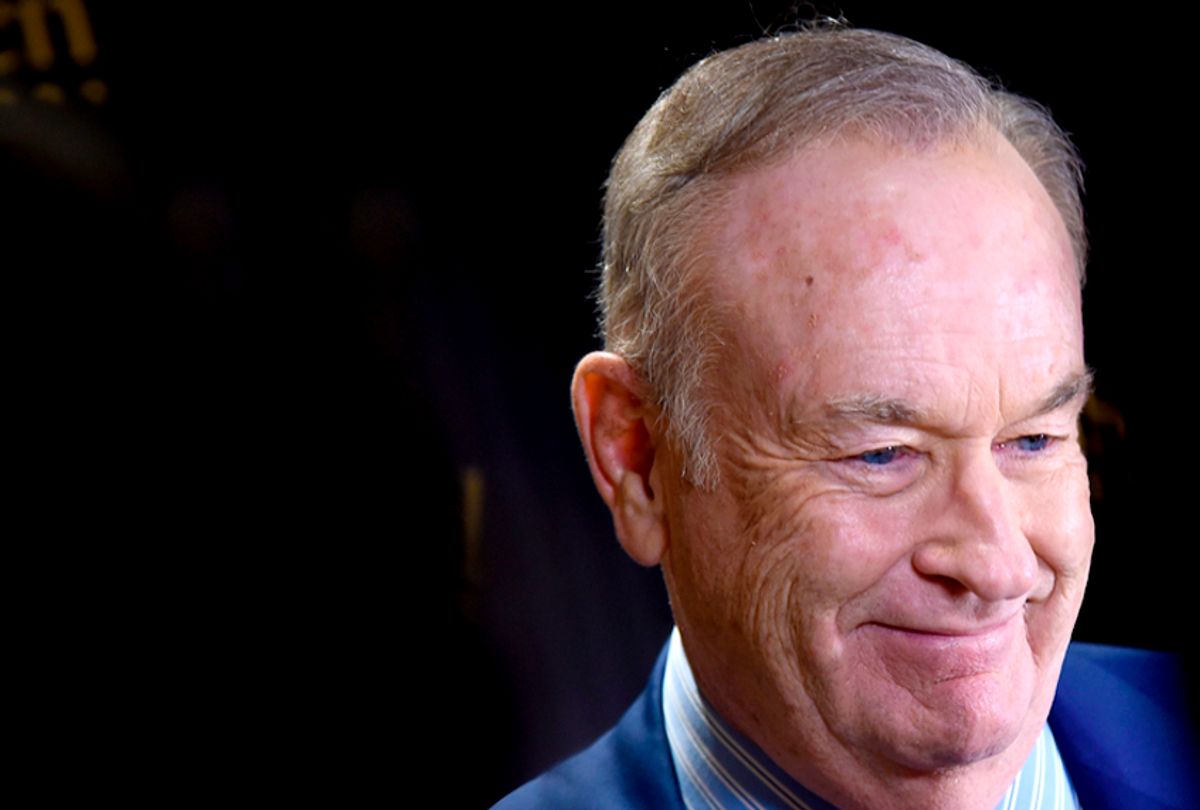 After the Emmys, there was a surge of outrage because Sean Spicer — a man who became famous because of his willingness to tell outrageous lies on behalf of his authoritarian boss, Donald Trump — got a chance to rehab his image by telling a few jokes onstage and taking some selfies with celebrities at after-parties. But it was far from the only example this week of the minuscule half-life of public disgrace enjoyed by prominent white men, especially those of the more conservative bent.

Bill O'Reilly was forced out of Fox News in April after The New York Times unearthed evidence that the right-wing news network had paid out more than $13 million in settlements to five different women who had accused O'Reilly of sexual misconduct. Obviously, the choice was strictly a business decision, as Fox executives were no doubt well aware of the lawsuits long before the Times was on the story. Still, it was a victory in the war for women's equality, in that even a conservative company must worry about having a reputation as a toxic, sexist work environment.

But like white male villains such as Freddy Krueger and Jason Voorhees before him, O'Reilly is rising from the dead. He's out on a media tour, ostensibly to promote one of his interminable "history" books, but in reality to forward a narrative about how he has been the victim of a coven of lying, scheming bitches.

It's sadly not surprising that Fox's remaining superstar, Sean Hannity, would invite O'Reilly onto his show to suggest that five women over the course of 14 years were working to destroy him with a campaign of lies. But it was disappointing to see that NBC's "Today" also brought O'Reilly on for an interview with Matt Lauer. Sure enough, O'Reilly used the interview to avow that he had "never mistreated anyone on my watch in 42 years" and paint the women who sued him as lying, grasping monsters.

He even went as far as to say, "Every allegation in this area is a conviction," an assertion that's so diametrically opposed from reality it's almost comical.

In reality, sexual harassment is widespread, but consequences for such conduct continue to be thin on the ground. About one-third of women report being sexually harassed on the job, but 71 percent of those of those women say they didn't bother to report it. Research shows that victims fear that they won't be believed and also that they may face retaliation. (Several of O'Reilly's alleged targets report various forms of retaliation; his TV interviews calling them all liars could be considered an example.) Half of all harassment allegations reported to the U.S. Equal Employment Opportunity Commission result in no charges.

What women tend to do instead is leave. The situation at Fox News fits this larger pattern. Most of the women who sued left the network, even as O'Reilly stayed on. And O'Reilly clearly hopes to continue the pattern. While some of his accusers have given up careers in television, O'Reilly seems to be trying to get his foot back in the door, using the platform of a high-profile interview on "Today" to get him there.

To be fair, Lauer made a concentrated effort to hold O'Reilly's feet to the fire, repeatedly prodding the onetime Fox host with reminders that five separate women filed suit against him over many years and expressing skepticism that all that was just an unbelievable spate of bad luck. It's easy enough to see why Lauer and the team at "Today" thought this was a golden opportunity, both to get ratings and to corner a famously sleazy right-wing misogynist on the air. If I'm being honest with myself, I would have been tempted to take a crack at it myself.

Still, the video clip shows how miserable the on-camera interview is as a journalistic technique, at least when you're trying to get to the truth. An interview subject who is determined to mislead your audience has the upper hand in the situation. Calling them out for misinformation sounds easy on paper, but in practice it's really difficult.

For one thing, the interviewer doesn't have information in hand to refute whatever specific points the subject brings up. For instance, O'Reilly claims there's no "smoking gun" in any of these harassment allegations. Watching this, I got frustrated because Lauer didn't immediately ask him about the audio recording made by accuser Andrea Mackris that sounds an awful lot like O'Reilly propositioning her by describing how he would rub her down with a "falafel." (It's believed he meant a loofah.)

Maybe Lauer had forgotten about that incident, or was hazy on the details and didn't want to make a factual error on camera. Or maybe he didn't want to look like the bad guy by reciting O'Reilly's own (alleged) words back at him, which would make anyone seem gross and vulgar.

That also touches on the other problem in an on-camera interview: It's nearly impossible to hold someone's feet to the fire without coming across like you're the asshole. Anyone who thinks it's easy should try it sometime. Lauer, I'm sure, was well aware of the danger of making O'Reilly look like a victim if he tore into him too aggressively. Which led to an interview where O'Reilly said risible and misleading things without getting sufficiently challenged for it. In the end, O'Reilly did a pretty good job of accomplishing his goal: He introducing doubts about the nature of the allegations, even if the evidentiary record does not justify those doubts.

It's an admittedly difficult problem, and the apparent solution — simply don't do interviews with people like Bill O'Reilly — feels insufficient. But it's also time to accept that TV interviews are an easy format for dishonest people with agendas to manipulate, especially when they're leaning heavily on the kinds of cultural and gender stereotypes at which O'Reilly excels. Someday, perhaps, our society can figure out how to keep these prominent white guys from coasting their way back into the spotlight after they've been deservedly disgraced.