How the ever-bigmouthed crooner has spun criticism into martyrdom 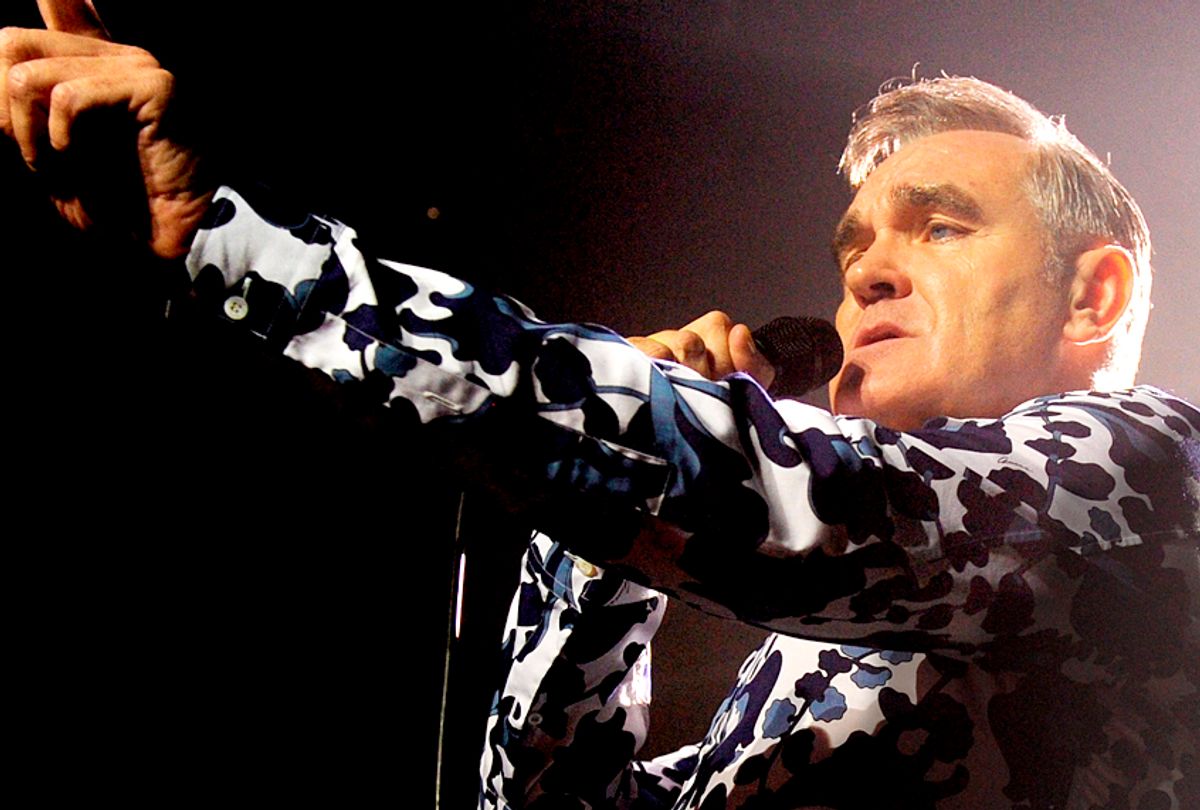 Of all the salacious secrets revealed or alluded to in Morrissey’s 2013 autobiography, called “Autobiography,” the most shocking was that he drove a car.

Imagine: Steven Patrick Morrissey, the bitter romantic singer of The Smiths and accomplished solo artist, idol of the terminally glum and broken-hearted, driving an automobile. Checking his mirrors. Buckling his seatbelt. Fiddling with the AM/FM dial. Muttering under his breath when he’s cut off on a crowded L.A. freeway. It’s almost unfathomable. (Yes, he drives a car in the 1992 music video for “My Love Life,” but that could easily be faked.) One imagines Morrissey conveying himself from Point A to Point B — be it from one concert venue to the next, or simply down to the shop to get some tea and Hobnobs or whatever it is Morrissey eats — not by any conventional means, but by, say, crowd-surfing across an endless sea of adoring fans or being ferried in a lavish funerary cart, like the corpse of Alexander the Great. The idea of Morrissey partaking in the world to the extent that he’s signaling turns and merging into traffic and parallel parking is, frankly, unbelievable.

Because Morrissey, you see, has always seemed a man outside-of-time, out-of-place, born in the wrong century or on the wrong planet. He doesn’t belong. His whole thing is not belonging. He is the popstar as Byronic hero, or as highly affected Oscar Wildean archetype, or as hopelessly out-of-touch cartoon, a crooning Montgomery Burns. This is, inarguably, a portion of his appeal, if not the whole of it. Morrissey is aloof and remote, above the fray of daily life or just outside it all together, unmoored from the nagging practicalities of daily life that bog us all down. He is the wanderer above the sea of fog. And so it is frustrating — bewildering, even — when Morrissey is expected to be anything else.

The latest Morrissey micro-scandal sees the singer, who just released a new single and joined Twitter in a seemingly official capacity, criticized for a new T-shirt that depicts a police officer brutally attacking someone, above the words “Who Will Protect Us From The Police?” (the title of a song on his forthcoming record). Described as “politically charged,” the dust-up is nothing compared to that which followed the release of a previous Morrissey T-shirt, depicting author James Baldwin (who is black) wrapped in a Smiths’ lyric (“I wear black on the outside/ ‘Cause black is how I feel on the inside”).

And of course these “problematic” merch designs themselves pale in comparison to the time Morrissey called the Chinese a “subspecies” (citing their negligent treatment of animals). Or the time he called dance music “a refuge for the mentally deficient.” Or his assertions that immigration is compromising English identity, or whatever he’s on about, on any given day. One can only imagine what controversy awaits Morrissey now that he’s on Twitter, a platform infamous for encouraging undercooked, thoughtless incitements.

As a public figure, it’s of course reasonable to take Morrissey to task for his co-opting of the images of police brutality and of American blackness, and for his totally thoughtless, mean-spirited comments about immigration. Yet there’s a relish to burning Morrissey. It feels automated, even performative. This is, after all, the guy who wrote a song called “Bigmouth Strikes Again,” presumably about himself. He has been incautious with his public statements since the 1980s. Being thoughtless and “problematic” is just Morrissey being Morrissey. And it’s precisely why his fans — and the press who giddily draw their knives — love him.

Remember that scene in Brian DePalma’s “Scarface” when Al Pacino gets wasted at a fancy Miami restaurant and starts snarling at Michelle Pfeiffer and then makes a big scene about being “the bad guy” and how people need him so they can point at him and say, “that’s the bad guy”? Well, Morrissey is just such a bad guy. In his thoughtlessness and arrogant woe-is-me posturing, Morrissey has become a superlative pop cultural scapegoat, right up there with Marilyn Manson and the Slenderman, a rookery of albatrosses hanging heavy around his neck. (Proverbially, of course. Morrissey doesn’t wear feathers or fur.)

Underneath the rote glee with which Morrissey is routinely attacked, there is a seething disingenuousness. After all, standing outside the ebbs of contemporary opinion, the moods of the moment and the fickle vicissitudes of anything like “political correctness” is exactly where we have positioned Morrissey as a cultural figure. Again: in many ways, Morrissey belongs to the past, to the bygone era of English Romantics like Byron, Keats and Shelley. (The Smiths’ “Cemetery Gates” being perhaps the most obvious nod to the latter, who famously wrote a letter to the young Mary Wollstonecraft Godwin asking her to meet him at the cemetery gates, where he would bestow a kiss upon her, above her mother’s grave.) He sings about love, loss, death and self-loathing like a foppish 19th century poet, wilting on some dewey knoll.

Yet this does not make Morrissey conservative in the traditional sense. Just as Romanticism, with its valuing of intense emotion and the pursuit of an authentic inner life, rejected the chilly calculus of modernity and the Industrial Revolution, Morrissey’s witty, highly literate, neo-neo-romantic lyrics and self-consciously solipsistic presentation-of-self stands as its own kind on individualistic rebellion.

On his funny, catchy new single “Spent the Day in Bed,” Morrissey exults cliches of “self-care” to the point of total social detachment. “I love my bed,” he sings, “And I recommend that you stop watching the news/ Because the news can try to frighten you.” He goes on: “Pillows are like pillars,” fortifying himself against the outside world, in his big, comfy bed, which he loves.

As ever, Morrissey’s making himself the villain, withdrawing when we’re all being pestered to engage and even “resist.” In this sense, he offers a contemporary fantasy of aloofness. In an era of media saturation and compassion fatigue, he coos of the decadent option of just straight-up not being bothered. Against looming twin threats of environmental and nuclear apocalypse, Morrissey knows that to turn away is a luxury. He is, like Lord Byron before him, seemingly indifferent to pressing political realities.

The redeeming rub is that it’s all a bit of a joke. “Spent the Day in Bed” makes a mockery of the luxury of indifference and a meta-mockery of himself. This is not to say that Morrissey is something other than indifferent, or callous, or bitter, or forlorn, or even a bit stupid. But self-martyrdom has always been his shtick. In order for him to be so hopelessly tyrannized, he must constantly provide occasion for tyranny. In order to be so beautifully misunderstood, he must give us something to misunderstand. So feigning shock and criticizing Morrissey about his T-shirt designs or his galling lyrics about dropping out of society to roll around idly under the covers, aren’t actual criticisms. They’re the embers stoking the martyr’s funeral pyre he has willingly built for himself.

To paraphrase the villainous, beautifully out-of-touch, self-scapegoating last of the romantics, there’s no need to rake up Morrissey’s mistakes. He knows exactly what they are.