Paul Manafort may hold the key: Who was he really working for? 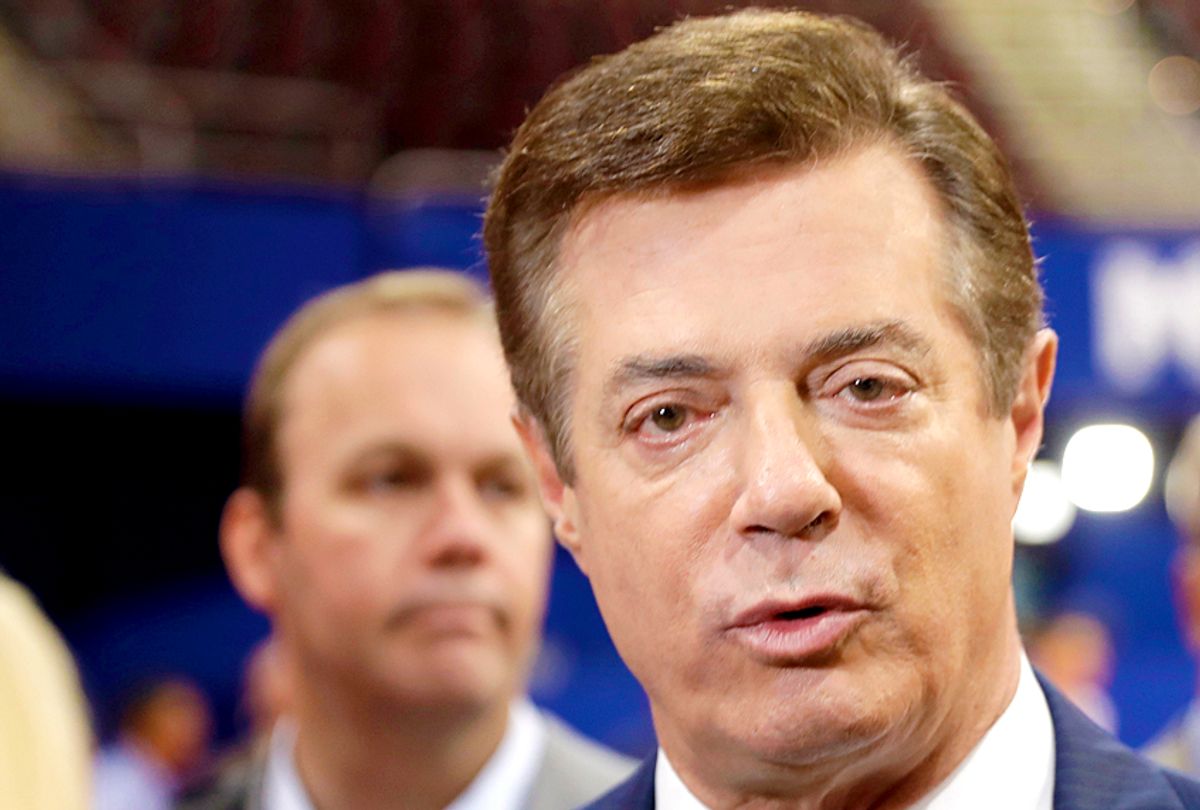 It's always risky to write a recap of the week's latest events in the Russia scandal on a Friday morning, since more often than not all hell breaks loose on Friday night. But this week's been so full of news, what with a horrible earthquake in Mexico, another devastating hurricane in Puerto Rico, a disastrous speech by Donald Trump speech at the UN and a calamitous health care bill poised to pass the Senate, that Russia news seems almost anti-climactic. But in any other week, the information that has emerged in the last few days about the investigation would be dominating the front pages of papers all over the country.

There are a number of threads to the story to pull together. The first is that special counsel Robert Mueller has sent requests to the White House asking for various documents pertaining to Trump's actions as president. These include the firing of James Comey and Michael Flynn, as well as requests for telephone records from Air Force One on the day the president helped draft the false statement about Donald Trump Jr.'s June 2016 meeting with a purported representative of the Russian government, in hopes of getting dirt on Hillary Clinton. Even the White House lawyers are compelled to cooperate, thanks to Ken Starr and the Republicans' obsessive pursuit of Bill Clinton's sex life back in the 1990s. At that time, courts held that the president's attorneys had to reveal any information they might possess about potential crimes implicating him.

There is no longer any doubt that Mueller's office is investigating the president for possible obstruction of justice in the Russia investigation, and it doesn't seem to be limited to events surrounding the Comey firing.

We've known the outlines of this before, but the details of Mueller's requests show that he's stepping up the pressure on the White House and will be focusing on individual staff members to testify about what they saw and heard during this entire period. Notably, Mueller's staff has requested information from former White House press secretary Sean Spicer about his public comments pertaining to Comey's firing.

That request has in turn led to the revelation that Spicer has kept copious notes going all the way back to the Republican convention, the Trump campaign, the transition and into the administration. Those will undoubtedly be of great interest to the special counsel and possibly the congressional committees. When asked about these notebooks, Spicer told his old friend Mike Allen of Axios to stop texting and calling him or he'd "call the proper authorities." As the Mueller investigation starts to close in on the White House, things are getting tense in Trump world.

But for all that intrigue, it wasn't the biggest Russia investigation story of the week. Since he was the man who ran what was known as "The Torturer's Lobby" in Washington for many years, it's only fitting that Trump's former campaign chairman, Paul Manafort, is slowly roasting over a very hot spit. This week CNN confirmed that Manafort had been under a FISA surveillance warrant by American intelligence services from 2014 through 2016 under suspicion of ... something. The warrant wasn't in effect during the period Manafort worked for Trump's campaign, but the government reportedly began to track his communications once again from the fall of 2016 through at least the spring of this year.

Manafort has been involved with a lot of shady characters over the years (and I do mean a lot), so it's difficult to know specifically why he was a surveillance target. But the Washington Post reports that among the documents Manafort turned over to the congressional committees are emails he sent to an employee named Konstantin Kilimnik, who allegedly has ties to Russian intelligence. In those emails, Manafort appears to be offering to set up meetings between Trump and a notorious Russian oligarch named Oleg Deripaska, who has previously been denied entry into the U.S. because of ties to organized crime.

These emails seem to be written in a sort of code to obscure Deripaska's identity, but nobody has had much trouble figuring it out. At one point Manafort wonders if arranging this meeting will make him "whole." Manafort's spokesman said that he was just trying to collect some money owed to him, but since Deripaska had filed suit against Manafort in 2014 for $17 million, it might make more sense to conclude that Manafort was offering to trade contact with Trump for a relief of his debt, rather than the other way around.

This raises the the question once again as to why in the world Manafort was supposedly working for a billionaire candidate for free. It's not as if Manafort was a longtime Trump friend or a true believer in Trump's ideology, whatever that is. He's a hired gun and hired guns don't work for nothing. He is not the type of guy who doesn't get paid.

Natasha Bertrand at Business Insider put together a narrative of Manafort's tenure with the Trump campaign that's very useful in drawing the bigger picture. The bottom line is that it is starting to look very much as if Manafort was working for someone other than Donald Trump.

What we don't know is what other people on the campaign knew, including Trump himself. To this day he can't bring himself to say anything negative about Vladimir Putin. His irrational attempts to shut down the investigation do not suggest the behavior of a man with nothing to hide.

Manafort left his job as campaign chair in August 2016, but continued to be involved. He made one key decision before his official departure: He made sure that Trump chose Mike Pence as his running mate. When Pence took over the presidential transition team after Chris Christie was let go, according to the Daily Beast, Manafort came back in the tent, helping to choose cabinet members and speaking with Trump and Pence on a regular basis. He even advised the incoming administration on how to handle the Russia investigation.

So Manafort, who had resigned after a wave of reports detailing his shady relationships with Russia-aligned Ukranian politicians, was up to his neck in the Trump transition. During the same period when Jared Kushner was meeting with Russian bankers and talking to the Russian ambassador about back channels at the Russian embassy, and Mike Flynn was on the horn promising to lift the Russia sanctions. Nobody remembered to put any of these meetings on their applications for security clearance.

It's not clear whether Trump has stayed in contact with Manafort since he became president. I'm sure his lawyers go to bed every night praying that he didn't.