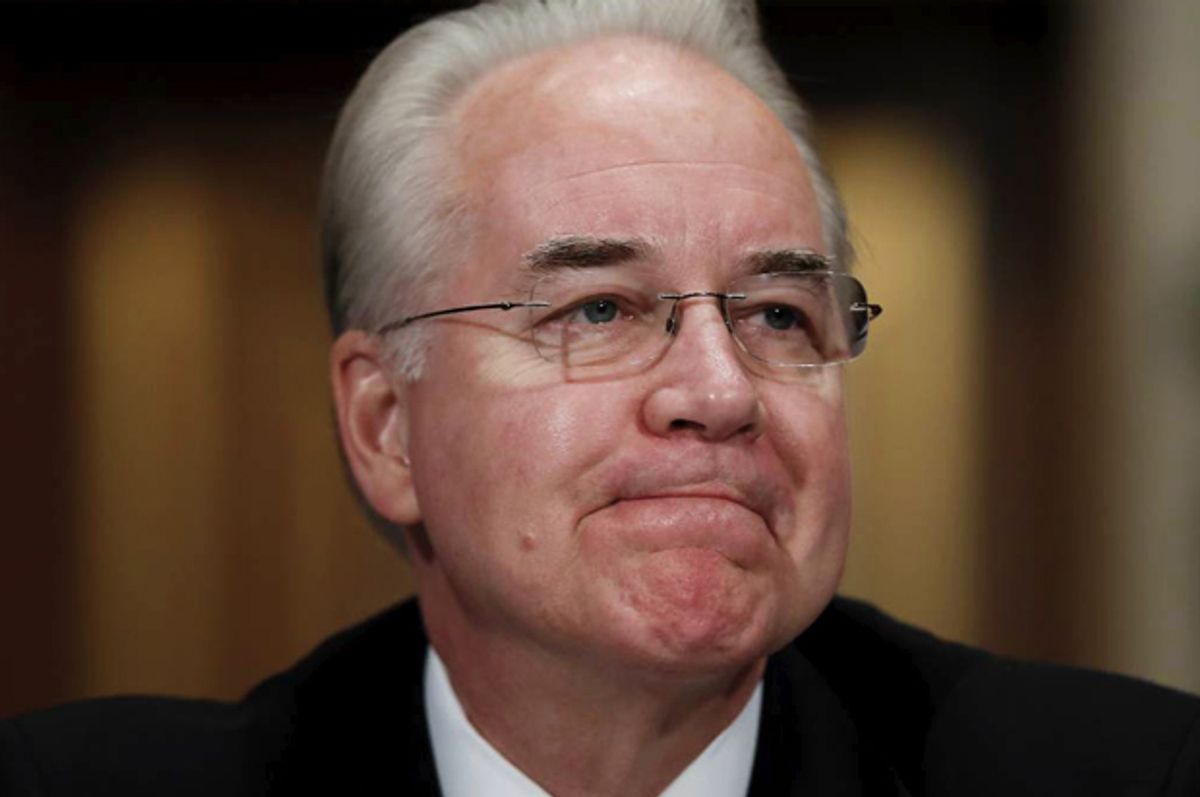 Since May, Health and Human Services Secretary Tom Price has taken at least 24 trips private planes charter planes that taxpayers are stuck footing the bill for, all while he continues to preach that he will get rid of wasteful government spending. The total cost of all trips have exceeded $300,000 and the frequency of traveling via private planes has suggested it has become business as usual as opposed to an exceptional privilege, according to an investigation by Politico.

Price's habits directly contrast his two predecessors, Sylvia Mathews Burwell and Kathleen Sebelius, Politico reported. Both Burwell and Sebelius flew commercial airlines while traveling within the continental U.S., but HHS officials have said that Price only travels on private jets "when commercial travel is not feasible," Politico reported. Politico explained that "feasible" is loosely defined:

But many of the flights are between large cities with frequent, low-cost airline traffic, such as a trip from Washington to Nashville that the secretary took on June 6 to make a morning event at a medication distributor and an afternoon speech. There are four regular nonstop flights that leave Washington-area airports between 6:59 a.m. and 8:50 a.m. and arrive in Nashville by 9:46 a.m. CT. Sample round-trip fares for those flights were as low as $202, when booked in advance on Orbitz.com. Price’s charter, according to HHS’ contract with Classic Air Charter, cost $17,760.

"The Secretary has taken commercial flights for official business after his confirmation. He has used charter aircraft for official business in order to accommodate his demanding schedule," Charmaine Yoest, a top spokesperson for HHS told Politico. "The week of September 13 was one of those times, as the Secretary was directing the recovery effort for Irma, which had just devastated Florida, while simultaneously directing the ongoing recovery for Hurricane Harvey."

While the hurricanes were used as a crutch to explain his frequent private jet travel, it doesn't explain the 17 charter flights Price took prior to any of the recent hurricanes. The trips also "did not appear to be for urgent HHS public health priorities," according to Politico.

A June flight from San Diego to a "glamorous conference" in Colorado serves as a prime example. Price arrived 19 hours before he was scheduled to be there. "That flight likely cost more than $7,100, according to one charter jet agency estimate," Politico reported.

"If you’re going to a conference, you have some [advance] flexibility to book travel" Walter Shaub, the Barack Obama-appointed director of the United States Office of Government Ethics until July, told Politico. He added that private travel was not necessary in those circumstances.

"This shows a complete disregard for the expense to the taxpayer."

Politico noted that Price spoke at a conference in June about the government's wasteful health care spending. He took a $50,420 flight to the meeting, and said that getting "value" for spending "is incredibly important."