How jazz is becoming the sound of resistance once again 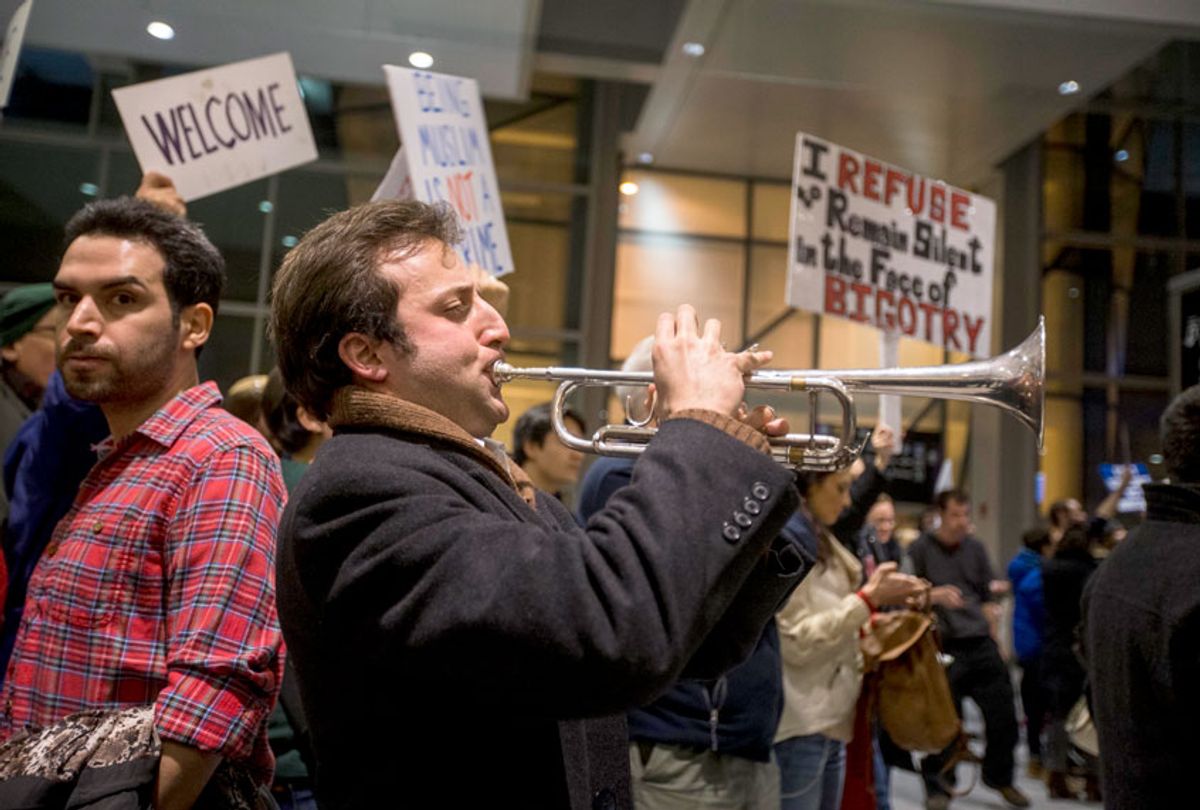 Vivid piano chords begin the song, sonically stomping in a display of defiance. Slow and steady drums creep in. Then, a saxophone accelerates the anthem into a bombastic fusion of orchestra, voice and rollick. This is "Change of the Guard," saxophonist Kamasi Washington's opening track from his 2015 acclaimed album "The Epic." It's the same song he opened with in LA last month when he shared the bill with jazz giant Herbie Hancock.

"Change of the Guard" is more than 12 minutes of rhythm, spirit and harmony, a statement to the gatekeepers of music: We're here and we have something to say. Its virtuosity and power demands you listen.

Washington is by far a standout among the wave of new jazz musicians. He's been called the most famous jazz artist since Wynton Marsalis, but he is not alone. There is trumpeter Christian Scott, pianist Samora Pinderhughes, trumpeter Keyon Harrold, drummer Jamire Williams, pianist Kris Bowers, bassist Ben Williams and others. As musicians, individually, and as a generation, they are redefining the textures and sounds of traditional jazz, venturing into contrasting sonic territories.

But beyond these fresh soundscapes is a political consciousness that bonds them. As well-known music journalist Greg Tate writes, they are "the Black Power flower children of the Black Lives Matter era."

The connection between Jazz and protest is nothing new. Pianist Pinderhughes explains, "As far as black American music, that has always been, and it has always had to be protest music." In addition, it is not just that these jazz artists are incredibly skilled. There has always been virtuosity in jazz. It is that for the first time in several generations, these musicians are distinguished again and for Washington, even famous.

"Our relationship with this country has always been documented through how the music changes," jazz pianist Jason Moran told the New York Times. "This is a time when black America is on fire, and Kamasi is adding fuel to the flames." (Washington's highly-anticipated EP "Harmony of Difference," arrives September 29.)

This resurgent jazz, and its various appearances in popular music today, builds not just upon classics of the genre, but across multiple black musical traditions, crossing many lines. One album might incorporate harmonies from gospel or R&B, rhythms of hip-hop, soul, and funk. In their broad retellings of black musical history, these works resurface the expansiveness of black history itself.

Baltimore City Paper music critic Al Shipley calls it a "big melting pot of black music," while music journalist Ashley Kahn describes the content as "the kind of outrage that is absolutely appropriate to what is going on right now." Pianist Bowers says his generation is confronting the inequality they see daily and putting "that back into the art just like they did in the ‘60s."

In "#TheProtestor," one of Bowers' standout tracks from his album "Heroes + Misfits," he acts as a storyteller with an intricate piano solo juxtaposed against a heavy percussive march acting as a back beat. It sounds like a demonstration. Similarly, trumpeter and Ferguson native, Keyon Harrold has two tracks back-to-back on his new album "The Mugician": "MB Lament," a song that honors Mike Brown and "When Will It Stop?," its sequel. Christian Scott's 2017 politically-charged trilogy celebrates 100 years of recorded jazz while interrogating the current sociopolitical climate. Ben Williams presented "The Protest Anthology" this week, a collection of new arrangements of famous protest anthems from Nina Simone, to Bob Dylan, to Common.

The parallels between the current musical climate and that of the Black Arts Movement of the 1960s are striking. The scholar Larry Neal, laid out the political dimension of the Black Arts Movement clearly when he called it "the aesthetic and spiritual sister of the Black Power concept." In this vein, Pinderhughes says, "We are lifted up by Alicia Garza, Patrisse Cullors, Opal Tometi [the founders of Black Lives Matter]. We’re not making things happen, but we can provide the spirit."

New York University musicologist Kwami Coleman, explains that during the Black Arts Movement, writers and artists connected blues to jazz to R&B in an attempt to create a broader, more textured picture of the black experience. Coleman acknowledges that the difference between now and the peak of the Black Arts Movement is the conscious shift away from a monolithic or even unified idea of the black experience. What makes this time in music so unique he says is "the idea that blackness is inherently diverse."

Part of this expansion is questioning the very label of jazz itself and its commercial limitations (according to Financial Times, jazz was the least popular genre by sales in 2014). After all, artists like Kamasi Washington and jazz-blender Thundercat were catapulted into the spotlight in large part due to their participation on Kendrick Lamar's rap fusion masterpiece "To Pimp A Butterfly" released in early 2015.

"I think that album has changed the world," Washington told Financial Times. "What Kendrick did with that record has opened the audience’s mind and even more so the mind of musicians. Young musicians are going to come up today with a feeling of possibility."

Bowers sees all this as in line with the legacy of jazz. "Miles Davis and Duke Ellington hated the word jazz," he says. The two titans found it too confining and resented the implication that African-Americans are limited to any one art form. "They were just doing whatever art spoke to them and then let people define that afterwards. I think anyone who does that has been my hero." Bowers hopes his generation is dismantling these musical genre divisions. Ultimately their goal is to "make people listen first and decide what to call it later."

For this new generation it appears that genre-bending innovation and politically-conscious content are intertwined. For Bowers at least, the connection is as inevitable as the fact that labels — whether racial or musical — typically prescribe stereotypes, which are dishonest and limit opportunity and expression. Bowers says, "If someone says 'what does Kris's music sound like?' And you say 'he's a jazz musician,' what does that mean?" He continues, "There's so much diversity within that 'genre' that it's hard to label these things. I hope eventually we find a way to not need or rely on genre titles, just like I hope we don't need or rely on race to use that first to define people."

In a political time where so much feels uncertain, it is often art that grounds us. Spearheaded by black creatives producing politically-charged art across mediums, there's a renaissance both healing and revolutionary rising to meet that. Here, jazz — which has often seemed classical rather than contemporary — is not just participating. It's leading. "You can trust the next generation," Kahn says. "I look at the world and politically, I don’t feel that way, but musically I do."

For Tate, contemporary jazz' role as an emerging soundtrack for the resistance makes total sense. "Political upheaval and jazz revivals tend to go hand in hand for African-Americans," he said, "and this Black Lives Matter-defined moment is no different."