Why do we keep insisting that education can solve poverty?

Wages are down and unions are weaker than ever, but still the myth that education can "fix" poverty persists 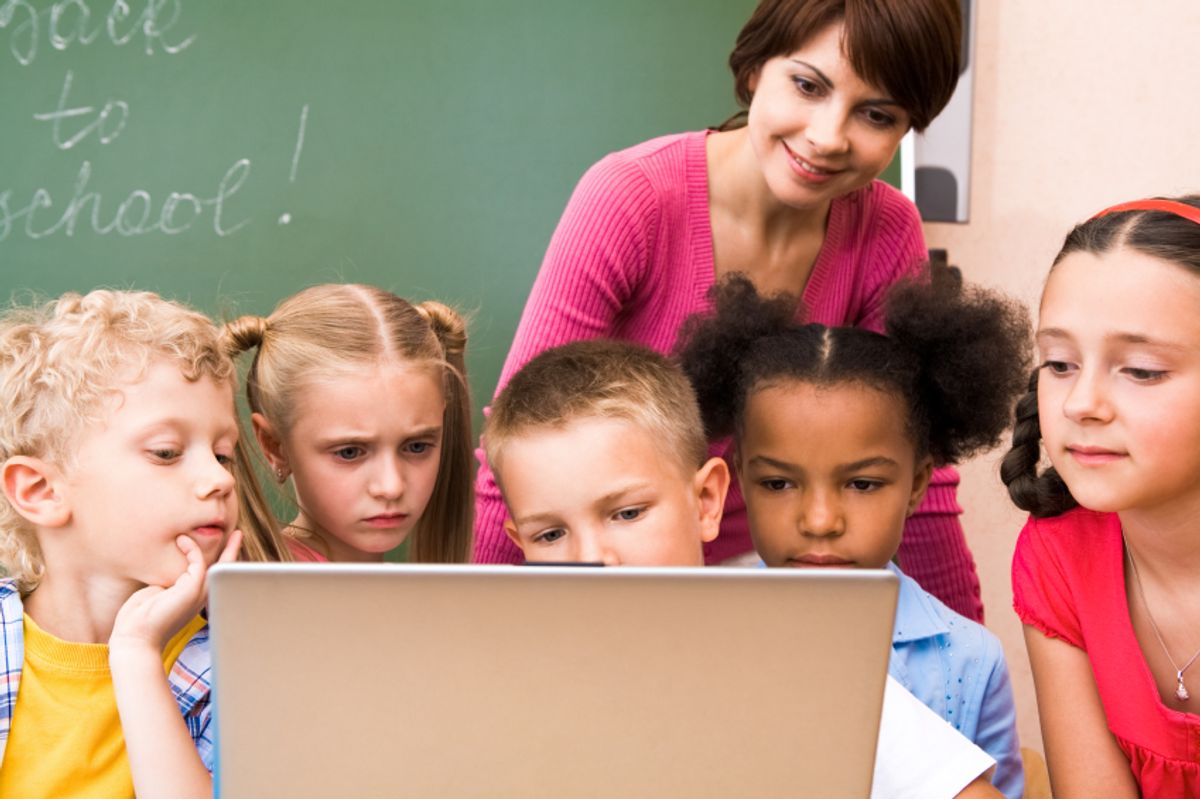 Unions are weak. Wage growth is non-existent. Plutocrats have all the power. And yet the myth that education is all we need to finally "fix" poverty persists. AlterNet education editor Jennifer Berkshire talks with historian Harvey Kantor about how the US gave up on the idea of responding to poverty directly, instead making public schools the answer to poverty. Hint: it all starts in the 1960’s with the advent of the Great Society programs. Fast forward to the present and our belief that education can reduce poverty and narrow the nation’s yawning inequality chasm is stronger than ever. And yet our education arms race, argues Kantor, is actually making income inequality worse.

Jennifer Berkshire: I read in the New York Times recently that education is the most powerful force for *reducing poverty and lifting middle-class living standards.* It’s a classic example of what you describe in this excellent history as *educationalizing the welfare state.*

Harvey Kantor: Education hasn't always been seen as the solution to social and economic problems in the US. During the New Deal, you had aggressive interventions in providing for economic security and redistribution; education was seen as peripheral. But by the time you get to the Great Society programs of the 1960’s, education and human capital development had moved to the very center. My colleague Robert Lowe and I started trying to think about how that happened and what the consequences were for the way social policy developed in the US from the 1960’s through No Child Left Behind. How is it that there is so much policy making and ideological talk around education and so little around other kinds of anti-poverty and equalizing policies?  We also wanted to try to understand how it was that education came to shoulder so much of the burden for responding to poverty within the context of cutbacks in the welfare state.

JB: You argue that by making education THE fix for poverty, we’ve ended up fueling disappointment with our public schools, a disillusionment that is essentially misplaced. Explain.

HK: One of the consequences of making education so central to social policy has been that we’ve ended up taking the pressure off of the state for the kinds of policies that would be more effective at addressing poverty and economic inequality. Instead we’re asking education to do things it can’t possibly do. The result has been increasing support for the kinds of market-oriented policies that make inequality worse.

If we really want to address issues of inequality and economic insecurity, there are a lot of other policies that we have to pursue besides or at least in addition to education policies, and that part of the debate has been totally lost. Raising the minimum wage, or providing a guaranteed income, which the last time we talked seriously about that was in the late 1960’s, increasing workers’ bargaining power, making tax policies more progressive — things like that are going to be much more effective at addressing inequality and economic security than education policies. That argument is often taken to mean, *schools can’t do anything unless we address poverty first.* But that’s not what we were trying to say.

JB: But isn’t part of the attraction of today’s education reform movement that it holds out the tantalizing possibility that we can correct the effects of poverty without having to do anything about, well, poverty?

HK: That’s right. What’s interesting about our our contemporary period is that we’re now saying schools can respond to problems of achievement and that we don’t need to address any of these larger structural issues. When you think about these larger questions — what causes economic inequality? What causes economic insecurity? How are resources distributed? Who has access to what? — they’ve been put off to the side. We’re not doing anything to address these questions at all.

JB: The belief that poverty can be overcome if we just find the right technocratic fix for what ails our schools reached a crescendo during the Obama Administration. You describe this as substituting accountability for redistribution.

HK: One of the end results of the way the accountability movement has transpired and evolved has been to narrow the questions about educational inequality to very technical questions. If we can just put in place the right teacher accountability system, or figure out the right curriculum standards,  that’s going to solve the problem of schools with large numbers ofpoor kids not doing as well. What I consider very technical questions bracket the larger questions of why it is we have so many kids concentrated in poor schools. Why do the rich kids get better schools? These aren’t just questions about accountability. They’re  more fundamental questions about class and race and power and inequality. Even though the accountability movement has often couched itself in the language of *no excuses,* and *every kid can learn,* its approach has been to narrow the debate even more and make it harder to address the questions that really underlie why some kids get an education that is so much better than other kids.

HK: It’s not that easy, in part because in the system we have now education is so key to the allocation of opportunity. People who have the most resources preserve their advantages and continue to operate in ways that serve those advantages. It’s a strange paradox, but it’s almost as though the more we try to increase opportunity, the more we increase inequality. It happens largely because upper middle class parents, knowing that education has become this allocative mechanism and the key gateway to preserving one’s advantage, do everything they can to make sure that their kids will have access to the resources that preserve those advantages.

So even while education policy is focused on the schools that poor kids attend, we’re not addressing the inequalities that have to do with the advantages richer parents have and work so hard to maintain. It works to create more inequality at the same time that it can’t really do anything about the other things that are really driving income inequality: minimum wages, unions, tax policy, the concentration of income at the top. So we have this strange situation where we’re trying to address educational inequality while economic inequality is expanding in ways that make educational inequality even worse. We don’t address that kind of paradox at all.

JB: You just used the word paradox. I’d like to throw another *p* word into the mix: plutocrat. I’m thinking, of course, about the outsized role played by billionaires in trying to *fix* our schools while benefiting from the income inequality that you argue is beyond the power of schools to fix.

HK: We always think of businessmen and really rich people as being opposed to social policy and against spending money to ameliorate social problems. But since the Progressive Era, we’ve had these periods of really active involvement by business people in social policy, including education. This seems to be one of those times where you have these really rich philanthropists trying to intervene to improve schooling, largely because they’re trying to legitimate the social system. What they wind up doing, though, is displacing the problems of economic inequality that they’ve created through their own economic policies back onto the schools. They can say: *see — we’re doing something about inequality,* but they’re not doing anything about the way that wealth is distributed or the way their companies work that would more fundamentally and directly impact those questions of inequality.

JB: There are some obvious similarities between the current debate over healthcare, which is defined almost completely in terms of individual responsibility, and the direction we seem to be heading educationally. In other words, will future generations even have need for the term *social policy*?

HK: I think what has happened in education policy really parallels what’s happened in social policy more generally. You’ve seen a tremendous disillusionment with the idea of social responsibility and *the public.* We’ve seen a shift in thinking about issues of inequality as a social responsibility to a matter of individual responsibility. Each individual is responsible for their own outcome, which is really how the market works. I think that’s the underlying ideological shift that’s driving education policy, and social policy more generally.

JB: We started this interview talking about history and I want to finish there as well. You've been thinking about how the *educationalizing* of our approach to poverty went hand-in-hand with the rise of mass imprisonment. This seems like an urgent issue for us to come to grips now, while also demonstrating the essential importance of historians.

HK: It now seems to me that we probably need to re-conceptualize the Great Society, not just as an effort to bring African Americans, Latinos, and others into the New Deal social state by expanding educational opportunity and fighting racial discrimination, but also as an effort to address the fear of social disorder those demands for inclusion created. The Great Society centered education policy in ways that intensified the commitment to educational solutions to economic inequality and poverty that is driving educational policy today to the neglect of other positive social policies. But it also planted the seeds of the carceral policies that later blossomed into more punitive policies, aimed at policing the poor and controlling urban unrest, that have resulted in the skyrocketing growth of the prison population. In this sense, we might say that the Great Society set in motion or institutionalized a kind of dual social policy or dual state: a *soft* state focusing on expanding opportunity through education and a *hard* state focused on punishment. From this perspective, the historical question thus becomes not only why the Great Society focused on education rather than expanding the nascent welfare state put in place by the New Deal but also why the war on poverty subsequently gave way to the war on crime.

Harvey Kantor is professor emeritus in the Department of Education, Culture and Society at the University of Utah. He's the author, with Robert Lowe, of *Educationalizing the Welfare State and Privatizing Education: the Evolution of Social Policy Since the New Deal.*