A one-of-a-kind museum grows in Florida 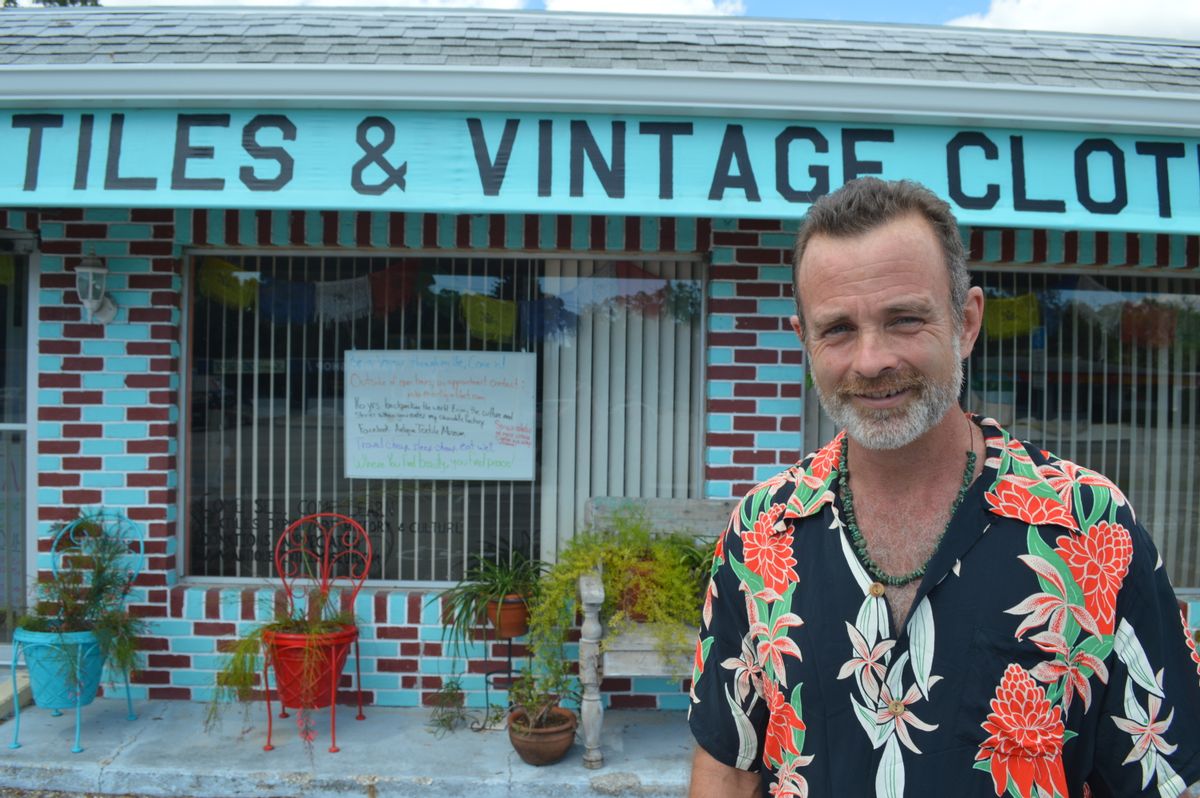 Inside his one-man Antique Textile Museum in Gulfport, Florida, Michael Petras, 48, sat at an old card table. Behind him hung a jean jacket with American flag fringe. His front tooth was chipped. He wore a vintage Hawaiian shirt unbuttoned to show chest hair.

Petras spent over a decade backpacking through Asia collecting rugs, ceremonial masks, and thangka (Tibetan religious art). Now, he’s opened his own textile museum, a type of institution most often found in big cities or at universities with wealthy benefactors.

“I’ve always wanted to show history and culture through textiles,” said Petras. “There are a lot of connections across cultures.”

Born in Flint, Michigan, Petras did a stint in the Army after high school, because, he said, “anybody who didn’t go to the army went to university or jail because there are no more jobs.”

After the Army, Petras attended DePaul University in Chicago. Although he’d always been a history buff, he studied entrepreneurship because his “sister was making so much money in business.”

During this time, he worked as a bartender, he said, to pay off his student loans. The work stress began to get to him, so he decided to ride his 1967 BMW motorcycle to Alaska.

On his way through Nebraska, a truck driver who Petras said “must have been going 90” knocked him off his motorcycle into a ravine. He said he was lucky police officers got to him when they did, because he would have likely bled to death if left alone much longer.

“I was basically carrying my foot,” he said. “It was still on my body at that point.”

Doctors amputated his left leg from the knee down, and after he healed, he visited a friend in Korea to “find” himself. Twenty-eight at the time, he hitchhiked to Tibet. He ended up spending the next 14 years practicing a lifestyle of “sleeping cheap, traveling cheap and eating well.”

Petras decided to move back to the U.S., he said, at 44. His interest in textiles had started with old Hollywood -- tailored pants and gabardine jackets -- so he drove across America in his Dodge Caravan to find vintage men’s clothing. He amassed a collection of 1940s suits, sport coats and about 2,000 handmade ties.

He came to Florida to watch the Detroit Tigers play during spring training and decided to move to the state in 2014. In March 2016, he bought a 3,635-square-foot building in Gulfport, a city near St. Petersburg.

“There’s no shortage of things to see and pieces to learn about,” said Mike Garland, 30, who shot the museum’s video for crowdfunding website Kickstarter. “The museum inspired a travel bug in me.”

Petras put his Asian textiles in the front, and hung men’s fashion (none for sale) on racks near an Americana-inspired lounge area.

“If you drive past this place you wouldn’t think about stopping -- it doesn’t look like anything special from the outside,” said Ester Venouziou, founder and president of Gulfport’s LocalShops1, a grassroots group that promotes independent businesses in the bay area. “Once you go in, all the stuff he has is amazing.”

Petras hopes to one day rotate the textiles and create exhibits such as “Florida clothing day.”

His place is packed full, he said, but there’s still stuff in storage.

“The whole point of the museum is to show people beauty,” Petras said. “There’s a lot for people to see and learn here.”