Americans are dinosaur illiterate — and that’s bad for science

If children are still being taught about fake dinosaurs, what hope is there for science literacy? 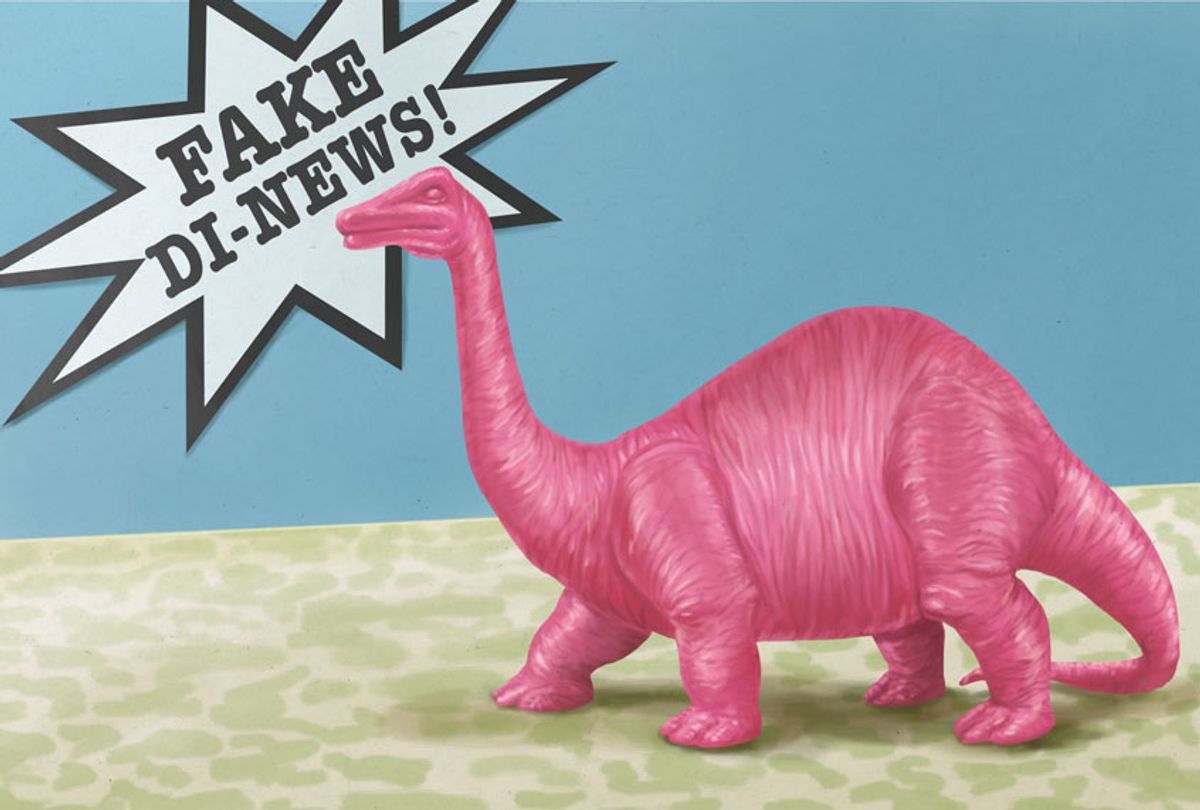 In 1903, the brontosaurus was revealed to be practically fake — the skeleton dubbed "brontosaurus" was simply a more complete apatosaurus than previously discovered — but you probably wouldn't know that if you consumed mostly children's media. When I bought my child a board book called "Dinosaur Dance," by the popular for-toddlers author Sandra Boynton, I found to my dismay that it included the nonexistent brontosaurus. And lest you think this kind of thing is a relic of the past (don't we all read classics to our kids that turn out to be outdated?), "Dinosaur Dance" has a copyright date of 2016.

Our scientific knowledge of dinosaurs seems like entertainment enough, but inaccurate dinosaurs for the sake of entertainment persist in media for both children and adults. From "The Land Before Time" (a pterodactylus wasn't a dinosaur at all, and saurolophus babies didn't have full crests like Ducky's) to "Jurassic Park" (velociraptors were small, about waist-high), media dinosaurs seem to be more fancy than fact. The PBS show "Dinosaur Train," which is supposed to be educational, rests on the false pretense that a pteranodon is a dinosaur (just like pterodactylus, we're talking about a winged reptile).

To analogize, take a look at climate change. The experts are really very clear on what climate change is, and why it is happening. We know fairly conclusively that climate change is real, that it is caused by human beings producing large quantities of greenhouse gases, and that it's already having an effect on weather patterns. Ninety-seven percent or more of actively-publishing scientists agree that global warming is most likely caused by humans. And yet, many people, including people with a great deal of power in this country, don't "believe" in climate change.

I'm not the only person to be concerned about scientific literacy, and specifically scientific literacy in children. A 2015 Pew Research Center poll, aiming to measure scientific literacy, sparked conversations about what that term even means, and how important it is. According to National Academics, scientific literacy is "the knowledge and understanding of scientific concepts and processes required for personal decision making, participation in civic and cultural affairs, and economic productivity." A scientifically literate person should be able to read articles about science and engage with them. And while it remains to be seen if a great understanding of science could sway so-called "climate skeptics," understanding what scientists mean when they use words like "theory," or why the scientific method matters, is no trivial matter. Instructions to raise scientifically literate kids include "From a very young age, read books about science topics to encourage your children's curiosity and broaden their knowledge base. As they get older, encourage them to read about science topics that interest them, whether it be dinosaurs, outer space, climate, or computers."

So back to dinosaurs. Out-of-date dinosaurs probably aren't, in and of themselves, a huge problem. However, they may be symptomatic of a larger problem. When I point out the scientific inaccuracies in kids' dinosaur media, I'm almost always met with an exasperated "oh, it's just for kids!" reaction. But the fact remains that dinosaurs are more than just cool animals that make great toys — paleontology is a science. All of the information we have (and don't have) about dinosaurs and other prehistoric creatures comes from scientific research and inquiry. When we treat dinosaurs as merely entertainment, entertainment that doesn't need a strong basis in facts, we're giving kids bad science.

How can we expect children to develop scientific literacy and interest if we don't respect them enough to give them the good stuff? If the purpose of giving them scientific information early is to inspire them to wonder about their world and learn more about science, giving them incorrect information first seems like the wrong way to do it.

Fortunately, some children's media does seem interested in the facts. This year's "Dino Dana," an Amazon original series which is the next incarnation of the popular "Dino Dan" franchise, strives for scientific accuracy. These shows not only provide kids with up-to-date science, they talk about the science, and the reality that sometimes scientists believed one thing about a dinosaur and then learned they were wrong. This is especially exciting, because it shows scientific inquiry in action.

If we want to raise a generation of scientifically literate kids, able to deal with the problems of our modern world, maybe we could start with giving them real science from the beginning. And that means real dinosaurs, in all their messy and ever-changing glory.