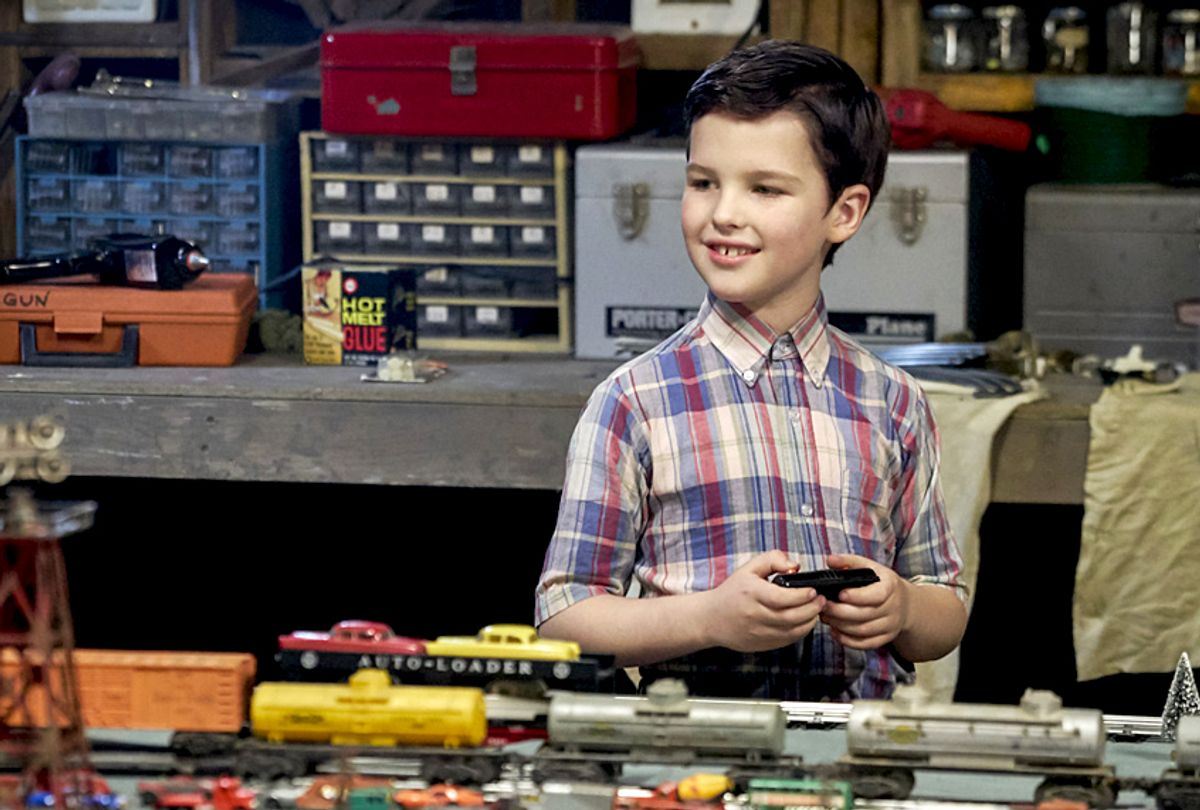 CBS is not a network that rewards creative risk. It doesn’t have to. About a decade and a half ago the network’s programming executives figured out what works — procedurals and simple multi-camera comedies -- and has not deviated too sharply from that model since then.

What CBS does reward are franchise generators like Chuck Lorre, who hit pay dirt with “Two and a Half Men” and kept the network dominant in the comedy space ever since. Lorre doesn’t have a flawless batting average, because nobody in the TV industry does. Instead, he has something better: a talent for maintaining consistency.

This is why “Young Sheldon,” premiering Monday at 8:30 p.m., is at once a big swing and a comfortable stroll around the bases. The new half-hour show spins off one of the most popular characters on television, Sheldon Cooper of “The Big Bang Theory,” by taking us back to 1989 and Sheldon’s childhood in East Texas.

Armitage’s Young Sheldon is just as obstinate and socially clueless as his character grows up to be, and this makes his first day of high school uncomfortable for everyone. He baffles his dad George Sr. (Lance Barber), who serves as the school’s football coach and insults the other teachers without meaning any harm. His brother Georgie (Montana Jordan) is horrified that he’s sharing classes with him. In record time Sheldon alienates everybody except for his mother Mary (Zoe Perry), a woman who definitely gets her son even if she doesn’t fully understand him.

Armitage plays Sheldon (or rather, he plays Parsons’ interpretation of Sheldon) adorably, and that’s probably all this series needs to achieve liftoff.  The piece also benefits from a bit of casting kismet in Perry’s portrayal of Mary, the youthful version of Sheldon’s religious mom. On “The Big Bang Theory” Mary was originated by Laurie Metcalf, Perry’s actual mother.

By focusing on Sheldon as a child, Lorre and co-creator Steven Molaro effectively sidestep the common trap into which long-running series on other networks have fallen when attempting to break an outsized character out from an ensemble. Groups of sitcom personalities are written to complement one another. Together they’re a troupe; individually they’re bland or unbearable. Everybody loved Joey Tribbiani on “Friends”; nobody could stomach Joey Tribbiani on “Joey.”

“Young Sheldon” makes the title character part of another ensemble trading in the classic “fish out of water” trope viewers can easily seize upon. CBS’ core viewership loves the familiar, remember, especially if a new show looks and feels a lot like one they enjoyed in the past. (Here, too, is where I’ll mention that “Kevin Can Wait” has its season premiere on Monday night as well, marked by the return of Kevin James’ “King of Queens” co-star Leah Remini.)

But this isn’t the series' topmost element of uncertainty. A larger question mark is whether audiences can embrace the idea of “Young Sheldon” being a half-hour as opposed to a comedy. "Half-hour" is admittedly industry jargon dreamed up by a streaming service (Amazon) attempting to explain why their 30-minutes-or-less episodic series aren’t comedies per se. Meaning, they’re good shows whose creators feel no pressure to write dialogue that qualifies as “funny” or “hilarious.”

This rebranded term applies to “Young Sheldon,” a single-camera series that’s light on laughter but just north of dramatic territory, quite handily. Whether it fits into CBS’ dominant Monday night comedy block remains to be seen. A lot depends on what viewers expect from a show that bears an atmospheric resemblance to “The Wonder Years” while lacking that classic’s bubbly joie de vivre.

That’s the main flaw in this show’s equation: a deficit of pep. Perry and Armitage are simply wonderful together, and in some scenes Perry’s rapport with her son is subtly moving to the degree that you may want to get your own mom on the phone. Raegan Revord pours on the snark as Sheldon’s sister Missy, who received the cosmic blessings in the personality and wit departments to compensate for the I.Q. points her fraternal twin drained away in utero.

A mildly dispiriting sense of isolation hangs from “Young Sheldon.” This jibes with childhood details shared by his adult version on “The Big Bang Theory,” and insinuated in Parson’s cheerfully narrated observations such as, “Nobody I knew in East Texas in 1989 cared about Newtonian physics. The only Newtons they cared about were Wayne and fig.”

That may not harmonize with the upbeat energy of “The Big Bang Theory” or the easy guffaws of “Kevin Can Wait,” the multi-camera comedies serving as bookends to prop up “Young Sheldon.” But it places it in a more auspicious position than Bobby Moynihan’s vehicle “Me, Myself & I,” premiering Monday at 9:30 p.m.

Created by Dan Kopelman, “Me, Myself & I” trades in Generation X nostalgia while bridging the demographic gap to appeal to the network’s older viewership. The difference is that this series won’t benefit from brand association beyond Moynihan’s reputation as a “Saturday Night Live” alumnus.

Here, Moynihan is a 40-year-old inventor named Alex who’s struggling through a patch of bad luck. His current misfortune recalls another time he felt like the world was going to end, when he was a 14-year-old in 1991 (played by Jack Dylan Grazer). Yet to be lived is an experience in Alex’s future, when his life really almost did end at the age of 65 (as seen through the eyes of John Larroquette). The guiding conceit here is that these three versions of Alex will live through separate moments that end up defining who he is. And once again, we have a network comedy that is not quite a knockout but is written to be sweet, harmless and probably unmemorable.

The plot of the “Me, Myself & I” pilot has a neat, muss-free poignancy to it that’s probably goosed by a decent soundtrack. (The inclusion of a track by the Flaming Lips is a nice touch in this regard.) The cast is enjoyable as well, particularly Brian Unger as Alex’s sage stepfather, Jaleel White as his loyal friend, and Sharon Lawrence, who pops up as Alex’s crush in 2042. All told, the premiere is solid from stem to stern but ends on a note that leaves a person content to leave all three stages of Alex’s life right where they are — a common problem with new series premieres. Satisfaction can be deadly if it doesn’t leave us craving more, and this could prove to be slow-acting poison for “Me, Myself and I.”

We may discover in the coming weeks that thin warmth is more valuable currency among this fall’s half-hour series than laugh tracks, which puts “Young Sheldon” and “Me, Myself and I” in a decent position to survive; and we may figure out what makes their stories work. These series happen to live on a network that sets a high bar for success and isn’t known for demonstrating much patience. That may not apply to “Young Sheldon,” a character and a show created by the man who has played a significant role in keeping CBS’ ratings up and the lights on. Those expecting genius may be underwhelmed with these new comedies, but at least they work well enough to give the writers time to tinker and adjust their equations.