There's the blustering tyrant — and then there's Kim Jong-un. He has no earthly reason to give up those nukes now 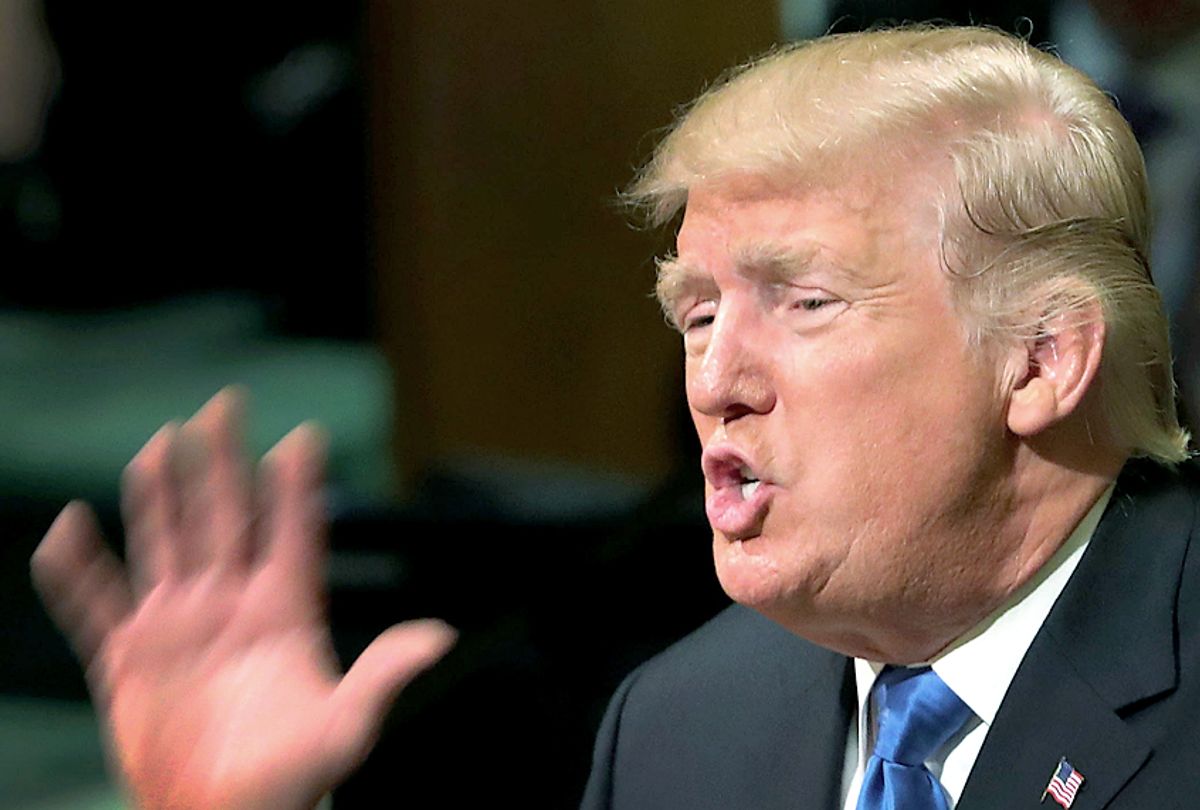 President Donald Trump’s speech to the United Nations General Assembly this past week did not put worried minds at ease.

What began as a factually sketchy boast about his own domestic accomplishments quickly devolved into the moment an American president stood up at the UN — a forum dedicated to dialogue and diplomacy — and threatened to wipe another nation off the map.

There’s been a lot of discussion about the North Korea threat in recent months, but Trump’s speech should prompt an uncomfortable question: Why would a nation like North Korea agree, voluntarily, to make itself defenseless against the United States?

North Korea is clearly a brutal and repressive regime, forcing its citizens to live in a society closed off to the rest of the world. Unfortunately there’s no good or easy way to change that. It is also a highly militarized regime and not one likely to back down easily.

From Pyongyang’s perspective, North Korea needs a nuclear deterrent to ward off potential attacks from the U.S. — and when Trump stands at the UN podium and threatens to “totally destroy” the entire country, Kim Jong-un can only feel vindicated in this regard.

Trump seems to see the issue in simplified terms: Do what we say and denuclearize or we’ll destroy you. He told world leaders that “denuclearization is [North Korea’s] only acceptable future.”

Kim likely sees it very differently: If we are stupid enough to disarm, it will be easier for you to invade and destroy my regime, so why would I be so foolish? As long as he can threaten the U.S. with nukes, Kim feels relatively safe as the supreme leader of the hermit kingdom.

Similar rhetoric from Trump on Iran gives Kim further reason to defy Washington. When Trump accuses Tehran of not being in compliance with the nuclear deal signed in 2015 — despite the assurances of a UN watchdog which says that it is — the message sent is that deals made with the U.S. don’t matter. If America won’t abide by them, why should anyone else? In fact, why enter into one at all? That’s the message being sent to the world by the great deal-maker.

Trump’s base and his fans in the media loved the UN speech with all its bombastic rhetoric and name-calling. But how does Trump think his speech played in North Korea? North Koreans already believe their country is under imminent threat from the United States. Watching him threatening their country with nuclear annihilation will only strengthen anti-American sentiment.

In his speech, Trump spoke of a “small group of rogue regimes” and the “righteous many against the wicked few” — but it’s important to remember how the U.S. is regarded around the world, not just by its allies. A 2013 survey conducted by Gallup International/WIN found that the U.S. is considered to be the greatest threat to peace in the world. Nearly one-quarter of respondents (24 percent) chose the U.S. when asked which country they considered the greatest threat. The closest runners up, Pakistan (8 percent) and China (6 percent), weren’t even close.

Media coverage of the North Korea situation often promotes the idea that a deranged madman wants to blow up the world out of blind amusement. Fears are drummed up by sensationalist coverage, but more often than not, the leaders of despotic regimes like North Korea do not want to be at war — especially a war with the United States. Of course they want the world to be scared of them; they want to look big and strong and willing to use their military arsenal. But ultimately, war is a threat to their power and way of life. For them, in an ideal world, everything would just stay exactly as it is.

What also gets lost in the coverage of North Korea is history. There is a bloody history between the United States and North Korea that rarely gets a mention. The U.S. carpet-bombed North Korea for three years during the Korean War of the 1950s. It was done “with next to no concern for civilian casualties,” according to Bruce Cummings, chairman of the history department at the University of Chicago and historian of the Korean conflict. Up to 3 million people were killed — about 20 percent of the population. As Gen. Curtis LeMay, head of the Strategic Air Command, put it: “We went over there and fought the war and eventually burned down every town in North Korea.”

That’s not a small event to drop into the memory hole when we’re wondering why North Korea “hates” the U.S. It is not just a matter of propaganda — though that exists in abundance, too.

There’s a similarly dark history between the U.S. and Iran — from the CIA-backed overthrow of Iran’s democratically elected prime minister in 1953 to the time the U.S. military shot down an Iranian passenger jet in Iranian airspace, killing nearly 300 people, and refused to apologize — and then rewarded the commander responsible with a medal. There’s always more to the story than “they hate us for our freedom.”

According to one French expert, Kim Jong-un is dangerous, but not crazy. “The ruling Kim family is far from crazy. In truth, they are all perfectly rational and well-educated,” she said. In her read of the situation, Trump is the irrational one — and that might be even scarier.

The North Korean leadership is hardly blameless in exacerbating this potential confrontation, but Trump’s speech at the UN was highly provocative and unnecessary.

The excuse of the irrational madman leaving the righteous invader “no choice” is nothing new. It’s blatant propaganda and we shouldn’t be duped into supporting Trump as he weighs whether to march into a war that could imperil millions.