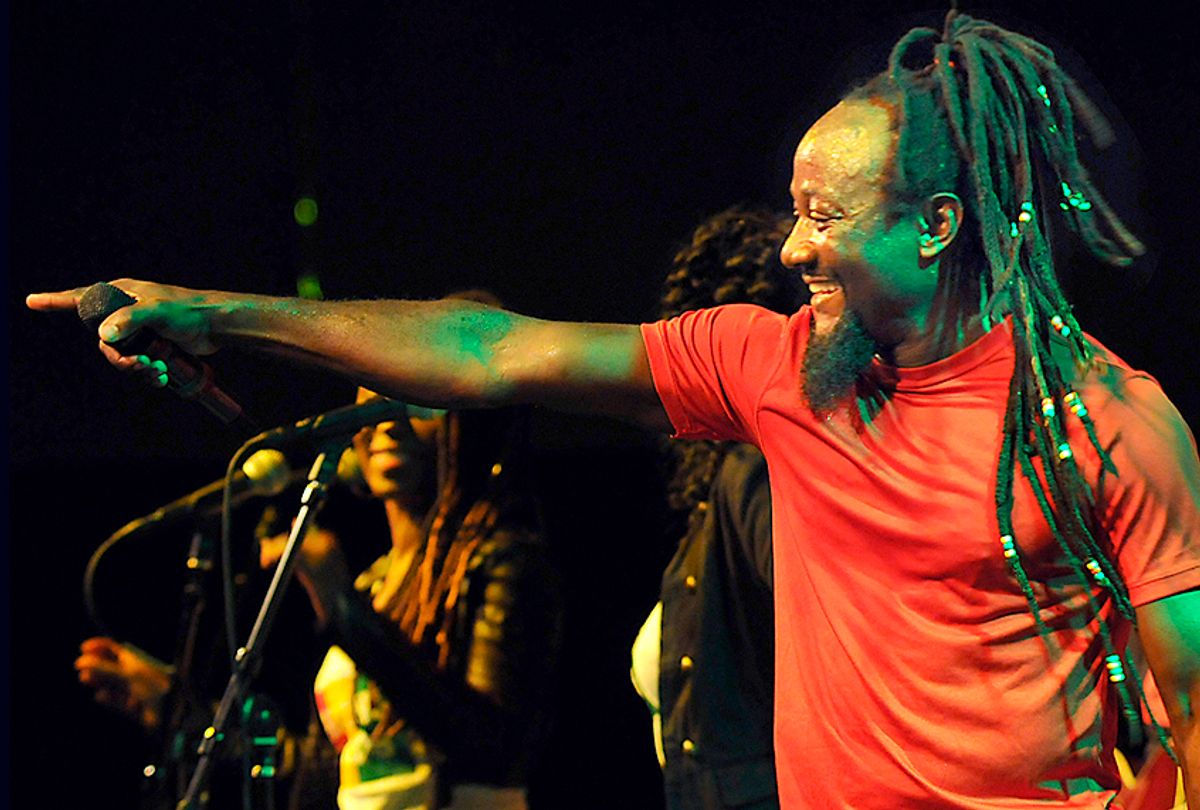 Mystic Bowie runs up on stage, beaming, his dreadlocks flying in the air. The 50-year-old Jamaican dances, lost in the joy of the roots reggae music his backing band plays to introduce him to the crowd. Everyone on stage is Jamaican, except for the Japanese keyboardist whom Bowie refers to as “the octopus of the band; she plays like she has eight limbs.”

The first song of the band plays with Bowie is unfamiliar at first; sounds like a traditional reggae track from the mid-’70s, one-drop played to perfection. When the keyboardist starts in on the melody, most of the folks in the half-filled Sacramento club show a moment of recognition on their faces. It's “This Must Be the Place (Naive Melody).” This is not a Talking Heads song widely known to the public, but it’s a fan favorite, and it sounds pretty incredible as a reggae song.

A few songs in, Bowie looks at that crowd and says: “The name of this band is Talking Dreads.” The crowd digs it, partially because it’s a Talking Heads reference, a play on the title of the band’s 1982 live album. But mostly it’s just the perfect thing to say. The band is Talking Dreads, they play reggae renditions of Talking Heads songs, and that pretty much sums it up.

The band runs through obscure album cuts and well-known hits. They’re more reggae than Talking Heads, which really works in their favor. I’m struck by the version of “Once in a Lifetime” with Bowie and the backing singers repeating the refrain “Same as it ever was,” while making the chopping hand motion that Byrne was known for — the combined effect delivers a more transcendental message than the original. My favorite cover is “Psycho Killer,” which they give an unexpected bouncy ska feel that adds an element of joy that suits the narrator of the song quite well.

I see a friend in the audience: Hans Eberbach. He’s enraptured by them. “This is so fucking good,” he yells in my ear. “I’m listening to the lyrics differently.” Later, when we chat, he tells me he had no idea who the band was before coming. He was intrigued by the concept of reggae renditions of Talking Heads songs, but didn’t have high expectations. “This wasn’t a gimmick. It was a very well realized alternative take on the music. It reminded me how brilliant David Byrne’s lyrics are.”

Bowie agrees. He's a hardcore fan of Byrne’s words, which is why he’s able to give the songs such a profound emotional component and authenticity.

“You got to take time to study each song. That’s what’s great about his poetry. It’s kind of like the Bible. Each person can interpret it their way,” Bowie tells me. “You can tell 10 people to listen to any Talking Heads song and tell them, get back to me in 10 days. Let me know what you think these lyrics are about. You will have 10 people show up with 10 different responses.”

I’m reminded of the Talking Heads song “Heaven” — which Talking Dreads plays at the show. For years I heard it as ironic commentary of our idea of paradise. (“Heaven is a place where nothing ever happens.”) Heaven is this perfect place, but it’s boring because there’s no conflict, and humans need conflict. But later I read an interview with Byrne, who said the song was about how overstimulated rock stars just want some peace and quiet every once in awhile.

I sit with Bowie before the show outside of Harlow’s in Sacramento, in a park across the street. He’s mellow, in good spirits. Earlier in the day, he attended a fundraiser event for his charity Mystic Bowie Cultural Center (MBCC), which a friend of his in Sacramento threw for him. He buys and ships art and school supplies to Jamaica. He’s also built and outfitted a fully functioning library in Accompong, Jamaica.

I tell him how hard it is for me to explain Talking Dreads to people and not have it sound like just another silly-themed cover band á la Mac Sabbath (a McDonald’s-themed Black Sabbath band), Mini Kiss (a little-person KISS tribute band), or Metalachi (Mariachi metal songs).

“I don’t want to be a cover band. If I wanted to be a cover band, I’d go back to Jamaica and play in hotels,” Bowie tells me. “Talking Heads music means a lot to me. I want to respect it in the most positive way possible.”

The decision to bridge the gap between Talking Heads and reggae was quite natural for Bowie. He grew up playing reggae, mostly as a solo artist under his name, “Mystic Bowie,” since the ‘80s, but he’s also been the lead singer of the Tom Tom Club (Talking Heads’ Chris Frantz and Tina Weymouth’s other band) since 2000. He very much has an inside understanding of the music and the people who made it.

He thought of the idea while on tour with Tom Tom Club, and ran it past Frantz and Weymouth.

“I was hoping, for years, for Talking Heads to get back together. Being around them, I’ve heard of the offers coming in. I was so disappointed each time when David would say no,” Bowie says. “I realized it’s not going to happen. I brought the idea to Chris and Tina while on tour. And they both laughed and said, ‘What an idea! You should definitely do it.’ I said, ‘You don’t mind?’”

They continue to encourage him. Bowie tells me how Frantz recently played some of Talking Dreads' music on his radio show, which is the biggest compliment Bowie can imagine.

For the past couple of years, he’s been touring relentlessly as Talking Dreads (his first show was in late 2015), and even recorded a full-length album last year, which he  hopes will be released in the spring of 2018. The album was recorded in Jamaica with a who’s-who list of Jamaican legends and players (Freddie McGregor, Ernest Ranglin), along with a guest vocal track by the B-52s’ Cindy Wilson. While in the studio, Bowie would make sure it was authentically Jamaican, but would also make sure it was true to the Talking Heads ethos. He’d run ideas past Frantz and Weymouth via text.

“I went back to Jamaica and re-wrote these songs in a Caribbean fashion and style,” Bowie says. “I feature a lot of these Jamaican artists and legitimize the entire process where it can be accepted and understood by Jamaicans. The rest of the world knows Talking Heads, so they’re going to catch on with the lyrics easier. In the Caribbean, you have to give them that thing that’s going to attract them to it, and that was their cultural genre to the songs.”

Bowie’s uplifting energy is hard to resist. “I’m like the luckiest man that ever lived,” he tells me, almost without prompting. He’s talking about all these music legends he’s gotten to meet and work with, and it fills him with joy. Frantz and Weymouth are just the tip of the iceberg. But even them, he remarkably met back when he was just a child.

Back in the early ’80s, he used to sing Calypso songs to tourists at a hotel in the Bahamas. Rather than hang out on the beach or run in the mountains with kids his own age, he’d go hang out at Compass Point Studios, a recording studio that Island Records founder Chris Blackwell owned. Everyone recorded there: the Stones, Grace Jones, U2, Talking Heads, James Brown. More than likely Bowie was lingering around outside, waiting to hang out with whatever foreign musician was around, and would allow him to take up their time.

“I remember having that stuff on a cassette and nobody wanted to listen. They look at me like I’m crazy — get that stuff out of here” Bowie says, laughing, proud of himself even. “I listened to that stuff like, ‘what is it?’ I was never normal. If I was normal, I would not be open to the opportunities and the experiences that I’ve had.”

He tells me a story about Emerson, one I can see he loves telling. During that same time period, Emerson would let him ride around the island on the back of his motorcycle. One time, a drunk guy pushed his way onto the bike with Emerson before Bowie could get on. Bowie didn’t flinch; he grabbed the drunk man by his shirt and yanked him off. That man, he found out years later, was Ringo Starr.

He got re-acquainted with Frantz and Weymouth in the early ’90s. A promoter booked him to play a festival in New York. The promoter told him he would provide Bowie with a backing band. He gave Bowie the address to go meet them. It was in Connecticut. The band was the Tom Tom Club. They all immediately recognized one another.

“That was the birth of the marriage of Mystic Bowie with the Tom Tom Club,” Bowie says.

He worked with the Tom Tom Club off and on the remainder of the decade. By 2000, he was a full-time recording and touring member of the group. Now Talking Dreads is his main gig.

He sees Talking Dreads as something he’ll be doing for the rest of his life. When I ask him about the the possible limitations of the band, he tells me that he plans to incorporate other material. He already plays songs by the Grateful Dead and Janis Joplin. In the future, he wants to work in original material as well.

“I want to see Talking Dreads go indefinitely. I’m basically planning for my great grandchildren to hear new song from Talking Dreads,” Bowie says. “If I was normal, I would not have these stories to tell. I have these stories to tell my grandchildren because of these experiences. Life can be great if you’re open-mind — if you’re abnormal. That’s what I consider myself, very abnormal.”