Your God will not help you: Darren Aronofsky's "Mother!" in the age of Trump

God is a vain creep who only wants adoration; a woman suffers. Aronofsky's film is compelling, but not mysterious 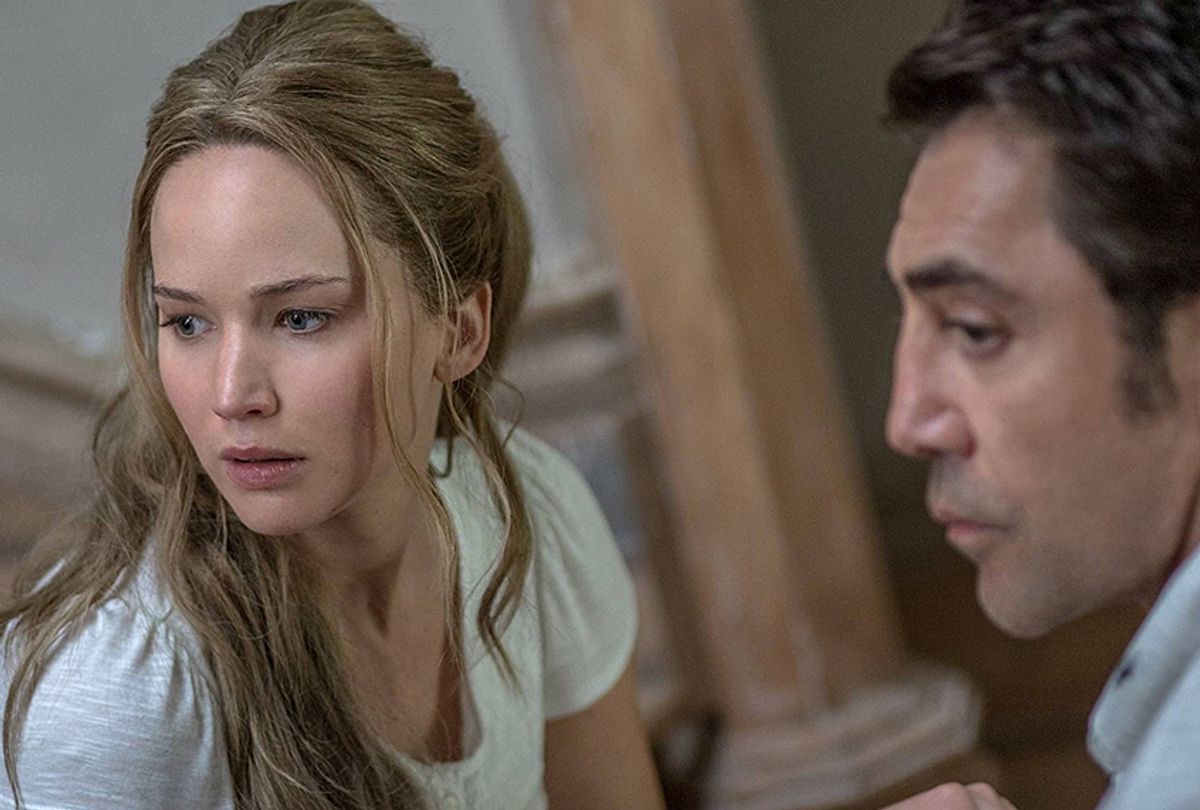 The new film "Mother!" is an exciting, tension-filled spectacle in which writer and director Darren Aronofsky has unapologetically applied his auteur sensibilities to religious mythology. Most audiences will not feel happy after watching "Mother!" Aronofsky likely does not care.

"Mother!" is a divisive film. This is as much because of style and presentation as because the subject matter challenges many filmgoers' (and reviewers') moral sensibilities. It also demands that the viewer watch carefully -- a burden that many filmgoers are unlikely to embrace.

Contrary to what many reviews have claimed, the narrative and ultimate meaning of "Mother!" is not complicated or mysterious. There is little subtext in the film. This is a retelling of the cycle of creation, devotion and destruction that is common to many religious and faith traditions around the world. Javier Bardem plays God referred to as "Him" (or "the Poet"). Jennifer Lawrence is "Mother," a synthesis of Gaia the Earth Mother, the Virgin Mary and the feminine complement to a God who in the Judeo-Christian tradition is often conceptualized as masculine.

"Him" is narcissistic and wants to be worshipped by his public. Bardem's character is also generous to a fault to the worshipers and other devotees who seek out his home. The victim of "Him's" generosity is his "wife," Mother: The interlopers show her no respect. The other characters and scenes in "Mother!" are allegorical and metaphorical archetypes of human folly from the Old Testament and other religious myths such as Cain and Abel, Sodom and Gomorrah, the Garden of Eden, the Great Flood,and the Tree of Knowledge.

As an example of how obvious "Mother's" allegory actually is, Lawrence's character even tells her husband that it is time to unleash the apocalypse. The conflagration spreads, and as it did both at the beginning of the film and at its conclusion, the world is cleansed of humankind, God remains, and Jennifer Lawrence's character suffers. The "feminine" (the Earth's environment) is again brutalized and destroyed by the "masculine," all the while bringing life to the world. This is religion as misogyny and sadism.

"Mother!" is not a work of genius. It lacks restraint. Aronofsky is too indulgent of his own creative quirks and whims. However, it's a powerfully crafted cinematic experience that sparks debate and is not easily forgotten.

Cinema is often described as a space that provides insight into a society's collective subconscious and the hopes, fears, and anxieties that reside there. Films also reflect the moment in which they were made. For Americans -- and the world -- "Mother!" is a powerful and unapologetic window into the madness of blind faith and religious extremism. There are many examples. Islamic terrorism is a persistent threat in the Middle East and elsewhere, while religion fuels genocide in countries such as Myanmar and Sudan.

In the United States, Donald Trump, a man with fascist tendencies and overtly racist views, who as a matter of routine violates almost every idealized norm of "Christian" behavior, was swept into the White House with the overwhelming support of white Christian evangelicals. Despite his almost endless moral shortcomings, they saw Trump as a tool for "God's will" and a means of enacting their anti-democratic Christian nationalist or "dominionist" agenda.

Scenes of chaos, destruction and slavish devotion to "Him" in "Mother!" inescapably evoke the way Trump serves as a savior or godhead for his "deplorables." Trump is a charismatic personality who channels the worst in humanity. His supporters are in love with him. He leads a political cult where the house of worship is not a church or temple or mosque but rather Fox News and the other fever swamps of the right-wing media and internet. If modern conservatism is a type of political religion where faith -- that which cannot be proven by empirical means -- supersedes reason, then Trumpism is  a wholly predictable phenomenon.

Films are in conversation with one another. They are not hermetically sealed cultural texts that exist in isolation. "Mother!" belongs to a long lineage of films that explore questions of the divine and mythologies of creation. But there are other connections as well. The chaos in Aronofsky's "Mother!" is strongly evocative of George A. Romero's horror film "The Crazies." While the madness and violence in Romero's original 1973 film and its 2010 remake are caused by chemicals unleashed by the U.S. military, the sense of unrestrained human chaos is very similar. Moreover, the 2010 remake is a thinly veiled critique of the Tea Party movement and Republican extremism. As political scientist Christopher Parker has shown, these forces metastasized into Donald Trump's electoral victory.

"Mother!" has not performed well at the box office. While a poor advertising campaign may be at fault, there is another possible explanation as well. Perhaps in a country where tens of millions of people feel traumatized by Trump's presidency (and what it portends for America's future), a movie about a God who cares more about his ego and self-aggrandizement and comparatively little about humankind is simply too depressing.

If the public wants mindless distraction and perhaps the cheap cathartic thrills of a horror movie such as "It," Aronofsky's "Mother" offers neither. This is a compliment, and not a criticism. America under Trump is in need of harsh truths. Mindless platitudes from the Hollywood happiness machine provide no such things.