"Star Trek: Discovery" explodes out of the gate — but what next?

This "Trek" isn’t about what happened. It's what's happening now 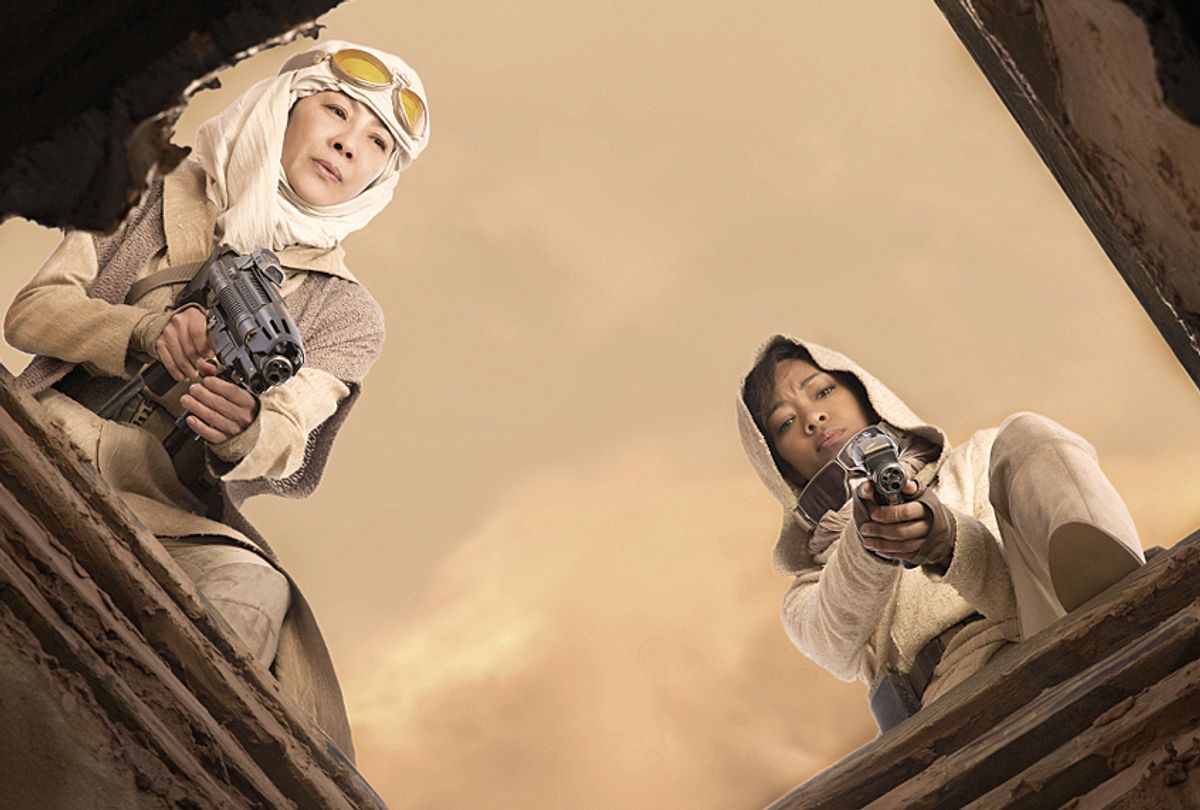 It might be impossible to think of "Star Trek" without mentioning the term "franchise." Time and again it proves its potency as a brand, and the rollout of "Star Trek: Discovery" is proof.

Sunday's two-episode premiere unveiled a slick, provocative, frustrating and moving drama that desires to dazzle as much as to be intellectually unpacked, and the preview of future episodes teases many more high-octane escapades designed to have broad appeal. It's also plain to see that "Discovery" is consciously designed to speak to this moment in time, but only so much. It is a CBS product, remember.

Note that, from this point out, there will be spoilers for the uninitiated.

"Discovery" marks the first time a "Trek" series has been told through the perspective of a crewmember who isn't a captain, as well as a maiden voyage into a new frontier of diversity with a pair of non-white characters leading the crew, First Officer Michael Burnham (Sonequa Martin-Green) and her superior and friend Captain Philippa Georgiou (Michelle Yeoh). From bow to stern, it's infused with just enough political and social undertones to honor Gene Roddenberry's original vision while appeasing viewers who are only in it for the action.

To paraphrase a line Michael says in the premiere, "Star Trek: Discovery" isn't about "Trek" holding tightly to the way previous incarnations have happened. It's about what's happening now.

Happily "Star Trek: Discovery" strikes a balance between what diehard Trekkies love about Roddenberry's universe and what J.J. Abrams injected into its theatrical resurrection. Ethical dilemmas and a clash between cultures and traditions comprise the fore of the narrative, but the hours don't skimp on phaser blasts and broadcast-appropriate carnage. In the first hour alone, Michael and the noble captain have a back-and-forth about Starfleet principles, but we also get to watch her dodge the lethal edge of a Klingon bat'leth. See? Everybody wins.

The chief reason for "Star Trek: Discovery" to exist is to goose the subscriber base for CBS All Access, the network's streaming service introduced last year. CBS is the first broadcaster to throw itself into the arena alongside Netflix, Amazon and Hulu; Disney is said to be following suit in the near future.

CBS obviously has confidence in "Star Trek: Discovery" — it wouldn't have given the premiere a Sunday-night berth if it didn't. But that's the last you'll see of the show on network television for the time being. If you want to watch upcoming episodes, you'll have to pay for a subscription to All Access, which is a lot of faith to put in a fandom's hunger.

If the trumpeting press releases in the wake of its premiere are to be believed, though, CBS' gamble is working out: the network boasts that it set a new record for subscriber sign-ups in a single day. What that means is tough to say, since no concrete numbers were included in this announcement. Welcome to a bold new world of data-free declarations.

Regardless of that, it's not hard to believe that viewer interest in "Discovery" is high, given the relatively high enthusiasm for Abrams' cinematic reboots, despite the criticisms over their eschewal of science and philosophy in favor of high-octane fight scenes and interstellar skirmishes. This is the first new "Star Trek" series since "Star Trek: Enterprise" creaked into dry dock in 2005 – a show that aired on the teeny, tiny extinct network UPN.

The faithful have been starved for a substantive treatment of the universe. Co-creator Bryan Fuller, who cut his teeth as a writer on "Star Trek: Voyager" and "Star Trek: Deep Space Nine" (still the best of the spinoffs after "Star Trek: The Next Generation"), is exactly the mind they'd probably want on this thing.

Unfortunately, Fuller exited the production over the classic "creative differences" argument. It's just as well, since he went on to produce the excellent "American Gods" for Starz, leaving "Discovery" in the hands of executive producers Alex Kurtzman (who co-wrote 2009's "Star Trek" movie as well as "Star Trek: Into Darkness") and Akiva Goldsman, with Gretchen J. Berg and Aaron Harberts serving as showrunners.

Fuller's imprint remains apparent in these opening hours, especially within Michael's backstory. But it's through the re-imagining of the franchise's classic antagonists, the Klingons, that his influence stands out. The new Klingons, like the Federation, look elegant as well as fearsome. You could also say they're more or less one-issue voters in this incarnation of "Trek," set in the prime universe a decade before the events of the original series.

Ever the warrior race, the Klingons of "Discovery" haven't made contact with the United Federation of Planets for 100 years. Starfleet and the Federation take this to mean they are content to remain separate and have adopted a policy that essentially breaks down to, "don't start none, won't be none." In their view, a century of calm is equivalent to peace. Nothing to see here folks!

However, Michael's personal history includes a violent run-in with Klingons that left her an orphan. Raised among Vulcans by Ambassador Sarek, she's excelled in Starfleet by striking a balance between human intuition and the logic of her adoptive culture.

But Michael also recognizes a looming threat when she sees it — which she does, up close, in a botched reconnaissance mission to explore an enormous unidentified object looming on the edge of Federation space.

Suffice it to say the officer discovers that the Klingons have not been idle all these years. What she and Captain Georgiou don't see, but we do, is that self-styled messiah T'Kuvma (played by Chris Obi) has taken it upon himself to wage a holy war against the Federation, which he has deemed to be aggressors. In his point of view, the Federation greeting of "we come in peace" might as well be a battle cry announcing the extermination of Klingon culture. Those echoes of the present feel intentional, as decent science fiction has a knack of reflecting the tenor of an era and its anxieties.

The principal tension of the first two episodes of "Star Trek: Discovery" involves fundamental misunderstandings of culture and intent, as well as the urge to dismiss the thought of the worst happening if an organization abandons protocol. In this way "Discovery" revisits the central warp and weft of "Deep Space Nine" and "Voyager" by exposing the flaws of the Federation's well-intentioned ideals of non-interference, negotiation and resolution of conflict through understanding.

Missing, at least in these first couple of hours, is the surge of Roddenberry-esque optimism that tends to prevail in this universe, the relative dearth of which made "Deep Space Nine" less popular among some fans. (Also missing, sadly, will be Yeoh; upcoming episodes place Michael under the leadership of Captain Gabriel Lorca, played by Jason Isaacs, a twist that's already a source of consternation in some corners of social media.)

Hope feels out of fashion in the current environment, sad to say. What "Discovery" could provide in its stead is the inspiration to endure, to overcome a conflict and eventually join up with that timeline in which James T. Kirk felt free to explore new worlds and ponder universal conundrums.

During one heated moment in "Discovery," a frightened ensign despairs aloud that he and the crew are explorers, not soldiers. For better or worse his situation, and our own, call for everyone to be some version of both.