Trump will ramble on after this latest chapter of toxic meddling, but the NFL will have to live with its response 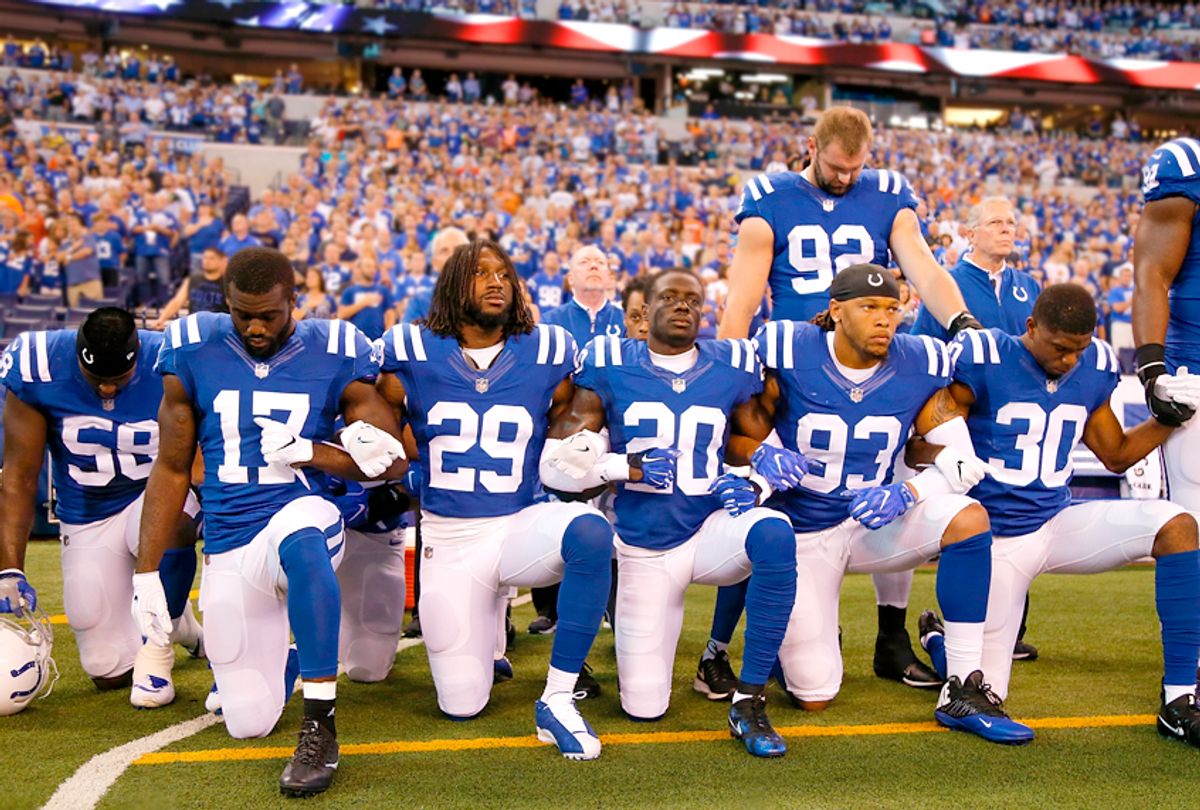 Members of the Indianapolis Colts kneel during the National Anthem, September 24, 2017 (Getty/Michael Reaves)
--

The National Football League demonstrations on Sunday, in which scores of players, coaches and owners spent the national anthem kneeling or abstaining from the ritual altogether, was the latest reminder of President Trump’s selective patriotism, his petulance and his bigotry, but also of what a two-bit businessman he is.

Trump took a small fire, in the form of NFL players kneeling during the National Anthem, and tried to extinguish the embers with his hallmark fire and fury. Naturally, he only made the fire bigger.

The saga, if you’ve not been following, began last season, with San Francisco 49ers quarterback Colin Kaepernick. Kaepernick silently declined to participate in the ritual of players standing with their hands over their hearts during the national anthem, citing the country’s treatment of African-Americans as the reason for the protest.

"I am not going to stand up to show pride in a flag for a country that oppresses Black people and people of color," Kaepernick said after a member of the media noticed that he’d spent the first few weeks of the preseason sitting on the bench during the anthem. "To me, this is bigger than football and it would be selfish on my part to look the other way. There are bodies in the street and people getting paid leave and getting away with murder."

By week four of the preseason, Kaepernick and a teammate, Eric Reid, began kneeling alongside their standing teammates during the anthem. The decision to kneel rather than sit was motivated by a conversation with former green beret and prospective long snapper, Nate Boyer.

"We sorta came to a middle ground where he would take a knee alongside his teammates," Boyer told Bryant Gumbel on Gumbel's HBO show, "Real Sports with Bryant Gumble." "Soldiers take a knee in front of a fallen brother's grave, you know, to show respect. When we're on a patrol, you know, and we go into a security halt, we take a knee, and we pull security."

Kaepernick was just a few seasons removed from being a phenom who helped bring the 49ers to the Super Bowl, but in 2016 he proved to be a bigger presence on the sidelines than on the field. This season, at age 29, he found himself without a job.

Is Kaepernick good enough to be on a roster? Probably. But the NFL is a conservative league, and its franchises have a history of treating “distractions” like the plague.

Comments by Buffalo Bills running back LeSean McCoy last month are illustrative of the league’s attitude. “As a team, trying to win and not have a distraction on the team, I just take that as a player — there’s certain players that could be on the team with big distractions, and there’s other players that they’re not good enough or it’s not worth it. I think [Kaepernick’s] situation is not good enough to have him on the team with all the attention that comes along with it. I’m sure if a guy like [Tom] Brady or a guy like, whoever is your favorite player — Odell Beckham or a guy like that — you’ll deal with that attention and play him.”

Now, you might not think that a player silently protesting before the game — a time when many fans are getting situated or relieving themselves or tailgating or carrying a tray of nachos back to their seat — would be a distraction. Fans have come to terms with rooting for all manner of criminals, cheaters and altogether rotten individuals, after all. But last year, NFL viewership dipped and a plurality of those polled on why they stopped watching cited the national anthem protests. Fans cared.

There is a history of professional athletes protesting ritualized patriotism in sports that predates Colin Kaepernick. During the 1995-1996 NBA season, Utah Jazz guard Mahmoud Abdul-Rauf refused to stand during the national anthem and was subsequently fined two days’ pay by the league and traded by his team. In 2003, the Toronto Blue Jays’ power hitting first baseman Carlos Delgado spent the seventh inning stretch in the dugout to avoid standing during the performance of  “God Bless America.” Delgado’s protest lasted two seasons, ending when he signed with the New York Mets in 2005; the team insisted that he stand on the field with his teammates during the song.

That is how these protests normally go: A player protests without anyone noticing, then someone notices and the protest causes a stir, then the team or the league intervenes and gradually the controversy fizzles and all returns to normal.

But the absence of Kaepernick this season hasn’t meant a return to national anthem normalcy. Donald Trump was sworn in as president towards the end of the 2016-2017 NFL playoffs and his tenure has only magnified racial tensions. In the first two weeks of the season, several players continued to kneel or raise their fists during the anthem. Meanwhile, the NFL has been hit from both sides. Conservative fans are outraged that players are being allowed to kneel, and liberal fans are outraged that Colin Kaepernick doesn’t have a job.

On Friday, Trump exacerbated the division. At a rally for Alabama Senator Luther Strange, Trump said, “Wouldn’t you love to see one of these NFL owners, when somebody disrespects our flag, to say, ‘Get that son of a bitch off the field right now, out, he’s fired.’” He added: “The only thing you could do better is if you see it, even if it’s one player, leave the stadium.”

And after Golden State Warriors’ point guard Stephen Curry told reporters that he wouldn’t attend the White House to meet the president, as is customary for world champion sports teams, Trump took to Twitter to disinvite Curry.

By Saturday, the NFL’s corporatist commissioner Roger Goodell faced little choice but to rebuke Trump. “Divisive comments like these demonstrate an unfortunate lack of respect for the NFL, our great game and all of our players, and a failure to understand the overwhelming force for good our clubs and players represent in our communities,” Goodell said in a statement.

Goodell’s sentiments were echoed, in many cases more explicitly, by players, coaches, owners and commentators in the NFL and NBA. By attacking the NFL over the handling of the situation, Trump forced the hands of NFL owners and their organizations. Organizations are normally inclined to stifle such demonstrations because they’re perceived as bad for business, but on Sunday they faced little choice but to band with players. Some teams abstained from entering the field at all during the national anthem. Many players knelt or raised fists. Trump made it ill-advised for the NFL to dispense with or fine anyone for such an action. To do so would’ve been a PR nightmare.

The episode was Jemele Hill v. Trump all over again. Sports leagues and The Worldwide Leader don’t want talent alienating fans with political speech. But when the president acts like a tyrant and demands someone who criticizes him or who peacefully protests be fired, the given organization cannot be perceived to be acquiescing; they’re left politely telling the talent to be nice or standing with the talent.

Instead of letting dissent run its course, Trump magnifies it. He put the NFL in an impossible position. Action alienated fans and inaction would alienate fans. There’s more for players to protest and less the league can do about it. Trump has made enemies out of former supporters, and he will very likely cost the league millions of dollars.

The NFL’s coffers are packed, and football is not exactly the most benevolent American business. But still, Trump’s penchant for sabotaging and denigrating American industry is striking. He is a president who has time and again promised to put America first. But he has only done so when it has suited his interests. His Twitter presence and his defense of white supremacists in Charlottesville made it untenable for American business leaders to work with Trump on his manufacturing council. He has repeatedly attacked and sown distrust in the media, which, lest he forget, is an American industry. And he has made overtly political, and resultantly polarized, nearly every sector of entertainment.

Sports leagues will be fine. The NFL has withstood an attempt by Trump to replace it; it will withstand Trump’s bad press. But more alarming is the utter disregard Trump has demonstrated towards the American worker. By undoing regulations, he has made American workers and citizens vulnerable to corporate negligence. The latest healthcare plan he championed will weaken protections for people with preexisting conditions. And now Trump wants the NFL to do away with protections for NFL players because the game used to be “tougher” and more entertaining? How dare he claim that “Making America Safe is my number one priority”?

Donald Trump was supposed to run America like a business. But what CEO is permitted by his or her shareholders to vehemently criticize subsidiaries in public, make toxic nearly every working relationship and advocate for putting their workers at greater risk? Trump only wants docile bodies, unthinking reverence, the return of an old racial and gender order and theater. He has always been more suited to the role of reality TV star than businessman. It’s at moments like these that you hope Republicans will have had enough of his antics and his policy ineptitude and impeach him. But it seems more likely that this all ends with The Rock challenging him to a cage match.