Gregg Popovich: When does "morality and decency kick in" for Trump voters? 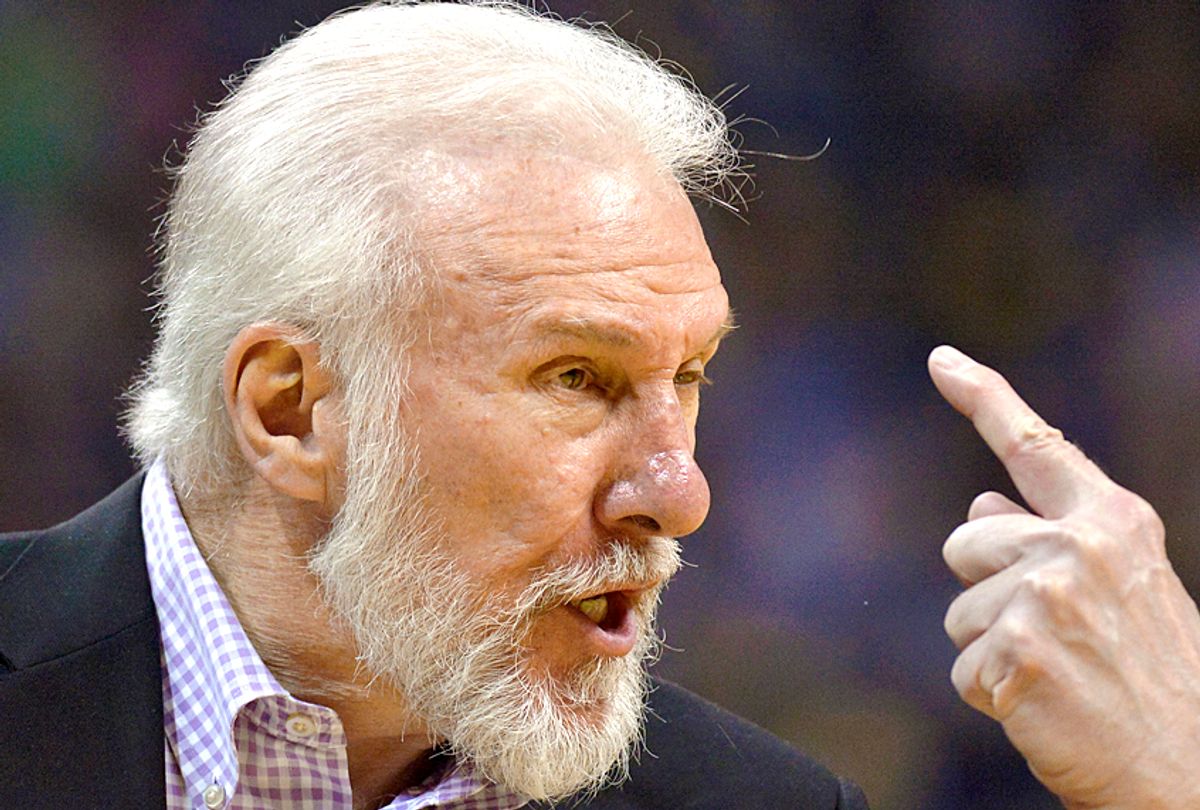 On Monday, head coach of the San Antonio Spurs Gregg Popovich articulated his support of the ongoing national-anthem protests taking place across the sports world. In declaring his support of any players who should decide to participate, he — as he has before — drew a sharp line under the racial issues surrounding the remarks by Trump and the way people of color are treated in this country.

“Obviously, race is the elephant in the room, and we all understand that. Unless it is talked about constantly, it's not going to get better. . . . 'Oh, that again. They pulled the race card again. Why do we have to talk about that?' Well, because it's uncomfortable,” he said "They have our full support and no matter what they might want to do or not do is important to them, respected by us," Popovich said in support of protesters. "And there’s no recrimination no matter what might take place, unless it’s ridiculous egregious."

Popovich also commented on the response by the president more specifically and asked when Trump supporters would wake up. “I wonder what the people think about who voted for him, where their line is, how much they can take, where does the morality and decency kick in?”

Popovich is not the only one to take aim at Trump's remarks; in fact, the floodgates have opened for pro sports teams to take a stand (or knee) against him. Tony Dungy, former NFL player and coach, commented on the protests on "The Today Show" Sunday, specifically about the backlash and the shift in the tides.

“Up until yesterday, the players would want people to know, this was not about the flag, this was not about patriotism. In their opinion, it was about social change,” Dungy said. “But yesterday this was a group of our family got attacked and called names and said they were unpatriotic and should be fired for, what we feel, is demonstrating our first amendment right. We’re gonna [ . . . ] band together as a family and they reacted."

Sportscaster Dale Hansen used his position as a Vietnam Veteran to defend the protests, in opposition to those against the protests who claim that the action is disrespectful to veterans.“The young, black athletes are not disrespecting America or the military by taking a knee during the anthem,” Hanson said. “They are respecting the best thing about America. It’s a dog whistle to the racists among us to say otherwise." He condemned those who don’t believe in white privilege as well. “They, and all of us, should protest how black Americans are treated in this country. And if you don’t think white privilege is a fact, you don’t understand America.”

Perhaps the most scathing rebuke was from former tight end Shannon Sharpe on Undisputed, where he commented on the solidarity of the NFL and the hypocrisy of the people in power in the league. “This wasn’t a protest. This was unity. So, what are we showing solidarity against?” He continued. “We’re showing solidarity because President Trump challenged the very men. Wealthy, wealthy men, billionaires, and he told them, what you should do if someone protests, you should fire them. They don’t like being told what to do.”

On Friday, President Donald Trump called those sports stars taking a knee during the national anthem in response to police violence in the United States “sons of bitches,” suggesting that they should be fired. This attempt to rally support from his base in turn sparked a wave of backlash and more protests.