It's about racism, not the flag: Jackie Robinson didn't stand for the anthem 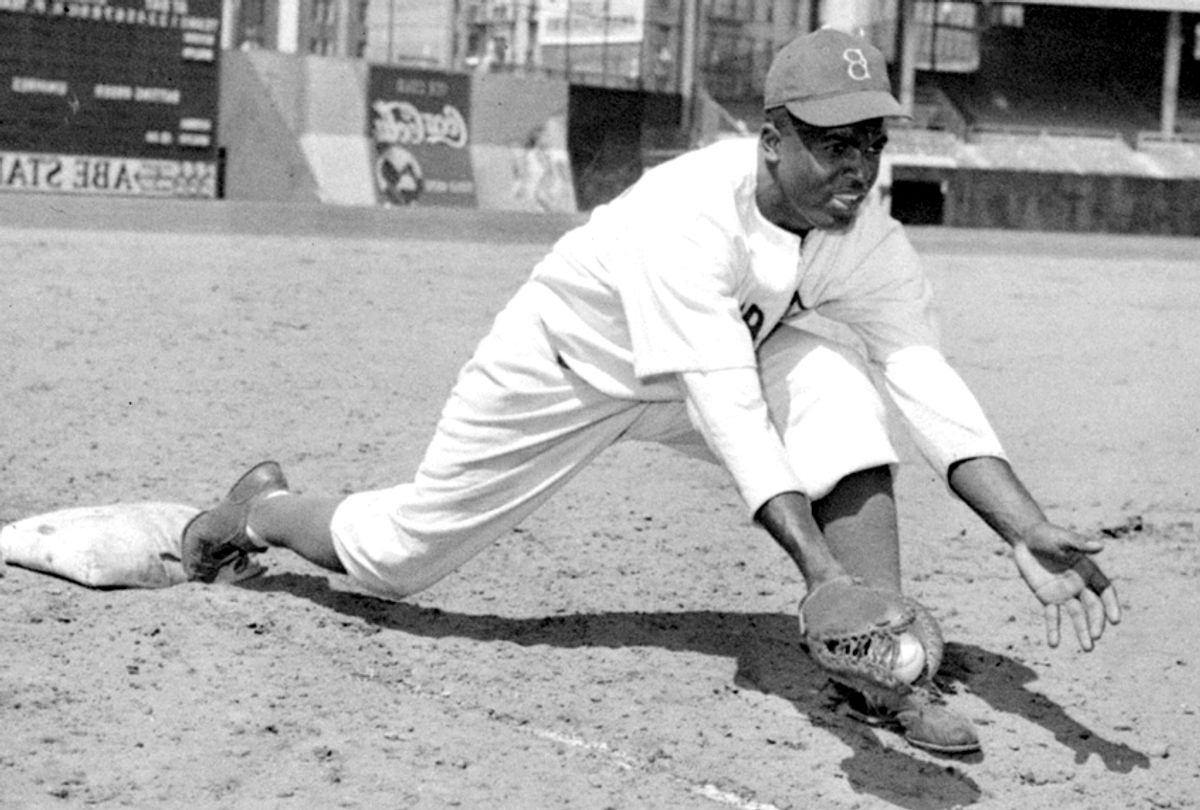 As the catastrophe in Puerto Rico looks more and more like it will end up worse than Hurricane Katrina, five days later the president finally tweeted  about it:

Texas and Florida are doing great but Puerto Rico, which was already suffering from broken infrastructure & massive debt, is in deep trouble. It's old electrical grid, which was in terrible shape, was devastated. Much of the Island was destroyed, with billions of dollars owed to Wall Street and the banks which, sadly, must be dealt with. Food, water and medical are top priorities - and doing well. #FEMA

It's stunning that anyone, much less a president, could possibly be this obtuse. He actually seemed to be saying that the people of Puerto Rico brought this on themselves. For a man whose businesses went belly-up four times, costing Wall Street and banks many millions in losses, to bring up Puerto Rico's debt at a time like this takes real chutzpah. It almost sounded as if he was saying they ("sadly") had to pay back Wall Street before they could expect any assistance.

And no, food, water and medical care are not "doing well." All of those things are in extreme short supply, along with fuel, phones and backup generators so people can access money from the banking system. The major airport is complete chaos.

The president is very busy right now so it stands to reason that he doesn't have much time to deal with an enormous humanitarian crisis. As Politico reported on Monday, Trump has been worried that his base was feeling neglected, so he decided to do a little race-baiting to show how much he loves them.

"He knows it'll get people stirred up and talking about it," a senior administration official said.

The official added that Trump fears his supporters may be feeling neglected after he decided to not immediately cut off protections for undocumented young immigrants known as Dreamers and after he cut a deal with Democrats on the debt ceiling and government funding.

His base was upset that he didn't thrill them by deporting 800,000 young Latinos immediately. So he figured if he called some famous African-Americans "sons of bitches" and insisted they be fired and blackballed, it would make them happy. According to The Wall Street Journal's Rebecca Ballhaus, on Tuesday night at a White House dinner, he said that the issue has “really taken off . . . He was happy — he feels like he’s clearly winning that exchange."

Trump thinks he's being clever by pretending the issue is about patriotism and the flag rather than race. He even twisted the meaning of the protest itself with his fatuous nonsense, suggesting that players locking arms were being patriotic while those who knelt were un-American:

That's ridiculous, of course. The locked arms were done as a gesture of solidarity with the men who took a knee, an affirmation of their right to protest. And an interesting thing happened at Monday Night football. Before the anthem played, the Dallas Cowboys, including the arch conservative owner Jerry Johnson, locked arms and marched to the center of the field where they all took a knee. And they were booed by many in the crowd, proving once and for all that the problem people have with the protest has absolutely nothing to do with the National Anthem or the flag and everything to do with the protest itself.

Trump had tweeted all day Monday about the flag and the anthem, while press secretary Sarah Huckabee Sanders robotically repeated the same words over and over again at the White House press briefing:

She even went so far as to say that the president using profanity was a defense of America and said if players want to protest police brutality they should protest the police officers who are protecting them on the field instead of the anthem. It was a very bizarre performance.

This brouhaha, of course, is all about race. It was conceived as a protest of police violence against unarmed African-Americans. But it's also true that Trump has a real problem with the First Amendment. We know how he feels about freedom of the press and religion. He's no more in favor of free speech, even tweeting during the transition period that “nobody should be allowed to burn the American flag. If they do, there must be consequences — perhaps loss of citizenship or year in jail!”

He apparently didn't realize that the man he lionized during the campaign as the perfect Supreme Court justice, Antonin Scalia, had joined the majority opinion in two cases when the court held that burning the flag was an exercise of free speech.

Scalia told CNN that he didn't personally approve of flag-burning, but explained that "it is fundamentally protected by the Constitution and the Founding Fathers' efforts to create a government not ruled by tyranny." He added, "We have a First Amendment, which says that the right of free speech shall not be abridged -- and it is addressed in particular to speech critical of the government. That was the main kind of speech that tyrants would seek to suppress."

There are many reasons that Americans have refused to stand for the national anthem or have knelt down to protest oppression. It's often been done to demonstrate opposition to racial discrimination, as Rep. John Lewis, the civil rights hero, observed:

Deciding not to stand for the national anthem was also an explicit and intensely personal protest for the man who courageously broke the color barrier in professional sports at great cost to his pride and dignity. I'm speaking of the military veteran and lifelong Republican named Jackie Robinson, whose 1972 autobiography ends this way:

Today as I look back on that opening game of my first world series, I must tell you that it was Mr. [Branch] Rickey's drama and that I was only a principal actor. As I write this twenty years later, I cannot stand and sing the anthem, I cannot salute the flag; I know that I am a black man in a white world. In 1972, in 1947, at my birth in 1919, I know that I never had it made.

That's what those athletes who are taking a knee are saying today, 45 years later. No matter how rich and successful they become, they are still black men in white America, facing potentially mortal danger every time a police officer pulls them over. Whatever Donald Trump and his deeply racist core of supporters believe, black men in America still do not have it made.