Milo's "Free Speech Week" was a flop: Here's how to beat the alt-right

Milo Yiannopoulos wanted confrontation and even violence. He got neither, so his Berkeley event was a failure 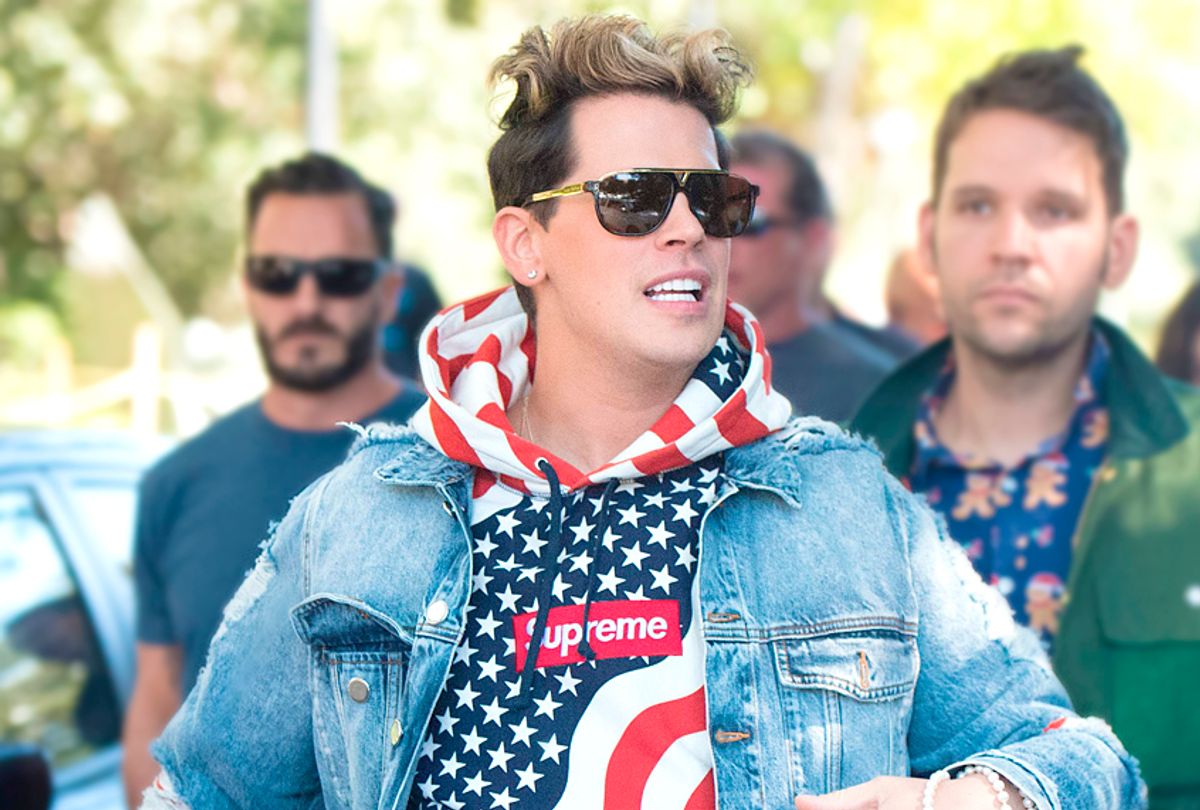 Milo Yiannopoulos' efforts at creating chaos at the University of California at Berkeley have ended with a whimper, not with the bang he was clearly anticipating. It's possible, even likely, that Yiannopoulos was planning all along to have Free Speech Week, his grandiose-sounding Berkeley event, implode so he could blame the university and paint himself as a victim of leftist censorship. Or maybe he and the supposed student group he was working with, the Berkeley Patriot, were too lazy and inept to put this event together, so Yiannopoulos opportunistically tried to spin it as the left-wing speech police in action.

Either way, Milo's stunt failed. Very few people showed up. Yiannopoulos created a few photo ops and then he got bored and wandered away from a mostly-empty Sproul Plaza, the Berkeley campus' most famous protest zone. Apparently the whole thing petered out in less than half an hour. Milo and his army of trolls failed to generate the dramatic clash between fired-up "alt-righters" and confrontational antifa activists that would have allowed right-wingers to paint themselves as victims of the violent and censorious left.

The whole thing was such a whiff that it gave UC Berkeley spokesman Dan Mogulof an opportunity to dunk on Milo so hard that even Fox News had to run his quote in the headline.

Certainly, Yiannopoulos ran to Facebook and tried to keep playing the "Help, I'm being oppressed!" card, but even his best efforts were limp and unconvincing. The whole thing was a laughable bust, and even Lucian Wintrich of Gateway Pundit admitted that he thinks Free Speech Week was a fake event that was designed to fail in hopes that the university could be blamed for "censorship."

There's a lot to be learned from this event, in terms of preventing future efforts by the hard right to create a victimization narrative that, like it or not, is effective at winning sympathy from people who might otherwise not be keen on the misogyny-and-racism message that people like Yiannopoulos peddle. Here are the three big takeaways.

1) The "alt-right" has nothing of value to say, and the quickest way to prove that is to let them say it. I used to have more sympathy for the no-platform movement. They are right to believe that reasoned debate doesn't actually dissuade people from buying into bad arguments in favor of bigotry, a truth the people making glib calls to "answer bad speech with more speech" tend to overlook.

It also become clear, however, that people like Yiannopoulos have really bad and dumb arguments that do little to win over fence-sitters, and therefore they need the "censorship" narrative in order to sell themselves. The debate over whether or not to allow Yiannopoulos a platform makes his ideas seem exciting and dangerous, exactly as the parental notification stickers on hip-hop records in the '90s often helped sell the product.

When Berkeley decided to deprive Yiannopoulos of that narrative and let him speak on Sproul Plaza, however, what quickly became clear was he had nothing interesting to say. He's a two-bit hack and rapidly gave up trying to pretend otherwise, leaving after a short speech. Most of his short speech focused on lambasting NFL players for engaging in public protest, demonstrating that Yiannopoulos' supposed enthusiasm for both free speech and subversion is nothing more than a farce.

2) Ignoring these people and hoping they will go away doesn't work. While it's critical not to meet the "alt-right" with either censorship or violence, both of which let them play the victim, that shouldn't be confused with ignoring them. People like Yiannopoulos are trying to start a neo-fascist movement, with a strong focus on recruiting young men. That's dangerous, even if they are a bunch of clowns, and needs to be met with resistance.

One reason I've held my nose and covered Yiannopoulos and the "alt-right" for months is precisely because I believe sunlight is the best disinfectant. Prior to the rise of Donald Trump, these right-wing trolls mainly targeted feminists and social justice activists online. Ignoring them didn't make them go away then, and it won't make them go away now.

It can often feel like walking a tightrope. It's hard to draw attention to the threat that trolls present without giving them the attention they crave. But the way the situation went down in Berkeley offered a good model for how activists, journalists and campus administrators who are dealing with trolls should handle the situation. As Hillary Clinton would often say about Trump, just because he's not a serious person doesn't mean he's not a serious threat.

3) The best strategy is non-engagement, coupled with offering an attractive alternative. Arguing with right-wingers doesn't work. As the saying goes, you can't argue someone out of a position they didn't argue themselves into. Confrontation, especially violent confrontation, just lets them play the victim. Formal debate, by giving  bigotry the form and social function of actual academic discourse, can often lull people into giving the "alt-right's" ideas more credence than they deserve.

What Berkeley did right was to minimize Yiannopoulos' attempts to attract argument, debate and especially confrontation. Instead, the university got ahead of the story, publicizing their efforts to ensure free speech on campus. That in turn made sure that the media responses to Yiannopoulos' victim pose were amused and mocking. This helped model a way for people to oppose him and his more overtly frightening allies without giving him the conflict he wants. Laughing at him was both good fun and a better way to to declaw Milo than violent confrontation could ever offer.

Counter-protest can be a good way to offer attractive alternatives to the "alt-right," but the key word here is "attractive." Whoever comes across as a self-serious bore loses. Let the right-wingers play that role, while the left organizes protests that are joyous or mocking or even outright dance parties.

It's no mystery why "alt-right" rallies attract leftists who are ready for violent confrontation. The idea of rumbling in the street against fascism is romantic. But right now, the best way to kneecap these neo-fascist recruitment efforts is to use scorn to send the message that only pathetic losers would join up with such a dead-end cause. That argument also has the enormous virtue of being true.