Scientists are the latest to "take a knee" against racial injustice, marking a possible turn for the campaign 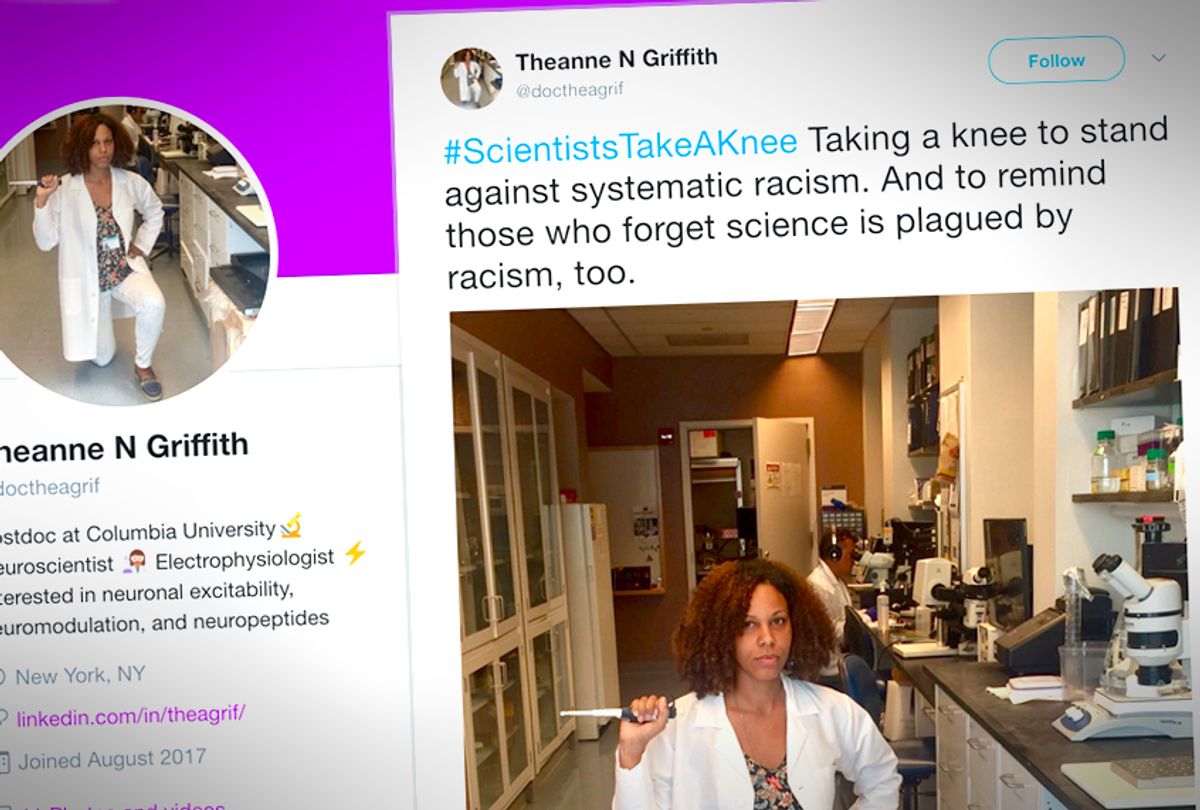 After the debacle between Trump and the NFL over the "take a knee" movement against non-indictments in police brutality cases, scientists around the world are taking a knee for structural racism within their field and in solidarity with those suffering other forms of racial inequality.

Using the hashtag #scientiststakeaknee, those working and studying in the STEM fields are posting and sharing photos of themselves and their colleagues kneeling.

Quartz reports that the movement seems to have started with a tweet on Monday from Melissa Bates, a physiologist and associate professor at the University of Iowa.

Can we pick a day and time to just all take a knee?

The idea quickly picked up speed and spread into a more rounded conversation about inequity, both in and out of the workplace.

I've been waiting a while for Science to show up for Black Lives#scientiststakeaknee is a starthttps://t.co/ZGYQDMY3VK — DNLee (@DNLee5) September 26, 2017

As #ScientistsTakeAKnee jumps off, don't forget that folks like @DNLee5 has been taking a knee for a while now. https://t.co/wchd9cAzM7

There are PoC people at your institution that is always working to improve equity, diversity and inclusion. Find them. #ScientistsTakeAKnee

We #TakeAKnee to stand against racial injustice in police brutality. The facts are there: https://t.co/iaOXhNi22h#ScientistsTakeAKnee pic.twitter.com/KlQBz4RpJY

#ScientistsTakeAKnee Taking a knee to stand against systematic racism. And to remind those who forget science is plagued by racism, too. pic.twitter.com/3bsAHyl3C9 — Theanne N Griffith (@doctheagrif) September 26, 2017

Scientists at UMich kneel in solidarity with our fellow citizens against discrimination, racism and police brutality #ScientistsTakeAKneepic.twitter.com/KQmQY29cPN

The hashtag seems to be connected to the #BlackAndSTEM hashtag, something intended to promote the visibility of black professionals whose work is in the fields of science, technology, engineering and math.

And, really, should we be surprised that those who participate in the efforts to raise the profile of people of color in the sciences should align themselves with fresh NFL-borne backlash against Trump? The administration is already anti-science, and clearly anti-diversity after all.

What's interesting here is not so much the alignment, but the possible effect. Taking a knee outside of the super-real setting of a football stadium refocuses the protest back on the very real, day-to-day world that Colin Kaepernick created the demonstration in order to change.

Granted, these scientists have nowhere near the celebrity exposure as the professional athletes we see on our screens on Sundays. Yet, these are the people who are actually forging our future. In this — and their everyday, every-person looks — they may spur an even larger, more inclusive grassroots movement for equity.