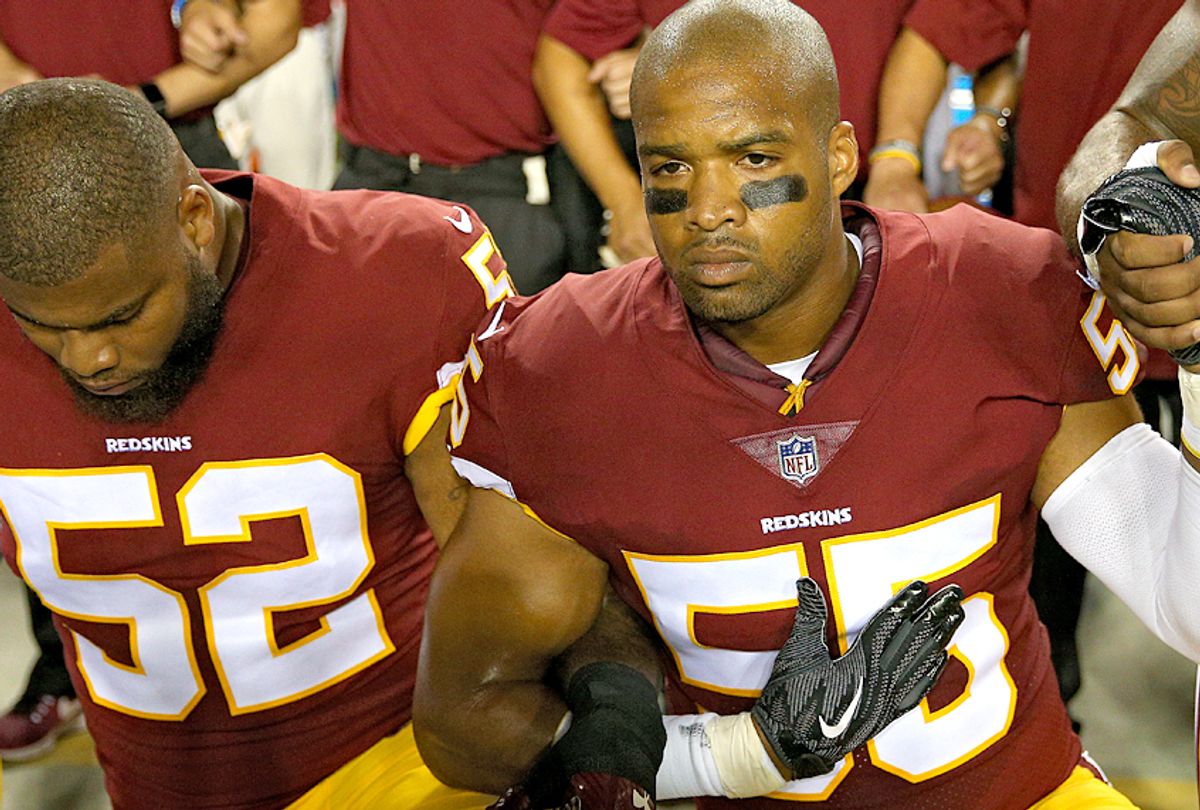 The backlash to the NFL protests continue, and not just on President Donald Trump's Twitter account. An array of people, companies and sponsors (read: white people) are acting out over  the peaceful, poignant protests against police brutality and racial injustice taking place during the national anthem — demonstrations that nothing more than black (and now often white) players kneeling during the national anthem.

Here's a just a handful the many, many white tears that have landed in in the last 24 hours.

The Steelers' team decision to stay out of public view during the national anthem Sunday angered one fire chief so much that he called the coach, Mike Tomlin, an "N-word" on Facebook. He was pressured to resign and has since denied being a racist.

DirecTV went on the defense, and announced they would provide refunds of their Sunday NFL package to customers offended by the anthem protests, even though their company protocol specifically outlines otherwise.

One British tv host felt it critical to get Steven Seagal's much-sought after opinion about the NFL protests. "I think it’s outrageous, I think it’s a joke, it’s disgusting," Seagal said on "Good Morning Britain." I respect the American flag. I myself have risked my life countless times for the American flag and I don’t understand or agree with this kind of behavior. I think it’s an outrage." Unfortunately, Seagal did not comment on his hairline.

The man who Corretta Scott King warned was too racist for federal nomination in 1986, yet has somehow become Attorney General in 2017 called the NFL protests a "big mistake to protest in that fashion because it weakens a commitment we have to this nation that has provided us this freedom."

Nobody loves Facebook more than racists. Michigan State Police Director used the platform to express anger at the protests, finishing off her post with the following: "We stand with the Heroes, not a bunch of rich, entitled arrogant, ungrateful, anti-American degenerates."

NFL sponsors, too,  are worried about backing black players who exercise their right to protest. One Denver car dealership will "evaluate" their deal with Broncos player Von Miller. Meanwhile, Century Link and Air Academy Federal Credit Union terminated their agreements with Brandon Marshall when he joined Kaepernick in kneeling last year.

Even a simple local beer distributor is running away from the NFL, removing all signage connected to the sport because "with all the negative attention the NFL is receiving right now due to these protests, we do not feel it is appropriate to associate our brand with them in the marketplace at this time.”

Elsewhere, an Army Veteran and self-proclaimed "huge football fan," doesn't think she can go on. Watching the NFL games now, "brings tears to my eyes, it's just too painful," she said to C-SPAN.

Oh, and yes, the president continues to tweet about the protests. Last night he compared the NFL players to running Usain Bolt. Creep into the responses for some blistering commentary.

All of this is working to muddle the message Colin Kaepernick first kneeled for (and is jobless because of), that police and the justice system treat black people as an imminent threat and their lives as expendable whether they be guilty or not.

And, yet, the reactions above, Trump's tweets, and the NFL owners' attempts to rebrand the protests as "unity" rather than justice, the "I'm not racist" cries coming from those saying absolutely racist things underline the problem: black self-determination, and the protest that entails, always means white discomfort, even when the black people are just silently kneeling.