Missing in inaction: Why hasn't Trump ordered the military to Puerto Rico?

Our troops could be delivering emergency supplies and rebuilding the airport right now. Yet somehow they're not 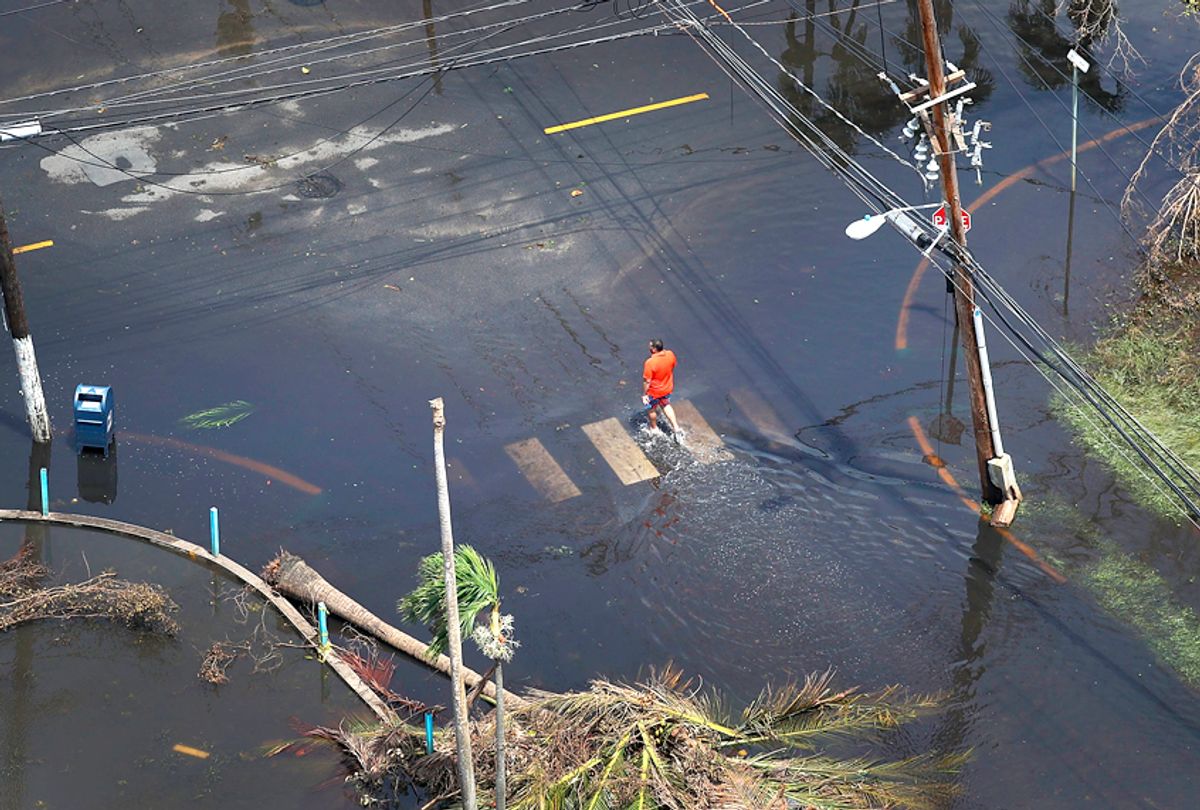 It’s been a week since Puerto Rico, a United States territory of 3.4 million people, was devastated by the second of two Category 5 hurricanes that struck it within a two-week period earlier this month.

Yet as of today, although virtually all Puerto Rico’s local farms were destroyed by Hurricane Maria, its electric grid almost totally taken down, its cellular phone system destroyed, its water and sewer systems rendered inoperable and its roads made impassable -- and although lack of communications and ability to travel has meant that the fate of millions in the island’s hinterlands and mountains is still unknown to family and friends in San Juan and on the U.S. mainland -- the federal government has done almost nothing concrete to bring real help or even food and medicine to the island.

This stands in stark contrast to the aid Washington rushed immediately to south Texas and south Florida in the wake of Hurricanes Harvey and Irma.

President Trump has cited the island’s fiscal insolvency as an issue, seeming to imply that was the Puerto Rican people’s fault. Indeed, Puerto Rico's economy was crushed by the financial crash of 2008 and the ensuing Great Recession; its government and various public agencies have been unable to make payments on more than $72 billion in bond debt. But Puerto Rico, as an unincorporated territory subject to the rule of Congress and to U.S. federal courts, is not permitted the same recourse of entering into bankruptcy and renegotiating its debt, as public agencies and municipalities within the United States can do.

Trump alluded to that debt in a remarkably insensitive comment (even by his standards), tweeting earlier this week: “Texas & Florida are doing great but Puerto Rico, which was already suffering from broken infrastructure & massive debt, is in deep trouble.”

He has also blamed the significant lack of aid coming from the U.S. on the fact that Puerto Rico is an island, saying on Tuesday, “This is an island sitting in the middle of an ocean. And it's a big ocean; it's a very big ocean. And we’re doing a really good job.”

What the president failed to mention is that Congress has long made transporting goods to Puerto Rico astoundingly difficult and expensive, dating back to the Jones Act. That law passed in 1929 requires, among other things, that all shipping between United States ports be done on U.S.-flagged and U.S.-built ships, which of course are among the most costly in the world to operate (and there aren’t many of them). The act applies to Puerto Rico’s ports, too. In Puerto Rico’s case, the Jones Act also imposes tariffs on goods imported to Puerto Rico from other countries, including the Dominican Republic, Venezuela, Colombia and other Caribbean nations in a good position to deliver aid if they could. (Cuba stands ready to aid Puerto Rico with both food and medical assistance, as it did following the devastating Haiti earthquake of 2010, but the U.S. would never accept such aid.)

When Puerto Rico’s government asked for an emergency exemption from the Jones Act, so that any ship from any nation could deliver needed supplies of medicine, food, water, fuel and emergency equipment like generators and rescue equipment, including from U.S. ports, the Trump administration flatly refused. Yet his administration readily waived the act for both Houston and Florida after hurricanes hit there, as George W. Bush did for New Orleans after Katrina and Rita.

A way but no will

Meanwhile, it is a joke for the president to claim that there is some major difficulty preventing the delivery of emergency supplies to the citizens of Puerto Rico — all of whom are American citizens as well. As commander in chief of the U.S. military, Trump has the power to order it immediately.

Indeed, by this point he could already have sent a rescue armada of Navy vessels steaming towards Puerto Rico loaded with desperately needed food and supplies.

One could easily criticize the nature and effectiveness of the support provided by the U.S. government after the 2010 Haiti earthquake as having been obsessively focused on security. But the U.S. government quickly dispatch an aircraft carrier loaded with relief supplies to that impoverished island after the quake struck. In fact, just two days later, U.S. personnel had the damaged Toussaint Louverture Airport up and running, and within a week there were 17 American ships, 48 helicopters and 10,000 sailors and Marines on hand, rising to 17,000 a week later.

No such dramatic action has been taken in the case of Puerto Rico, although there is a whole string of major naval ports lining the East Coast and Gulf Coast, where many transport vessels sit idle, all of them capable of rapidly delivering needed supplies to the island if ordered to do so. Yet these vessels sit in harbors at Norfolk, Virginia; Bangor, Maine; Corpus Christi, Texas; and Jacksonville, Florida, while the president talks about how difficult it is to get aid to the stricken American island. A week after hurricane number two hit, an aircraft carrier and a hospital ship have finally been ordered to prepare to head to the island, but at the moment there are only a few hundred U.S. troops in Puerto Rico, and those ships won't even leave port for at least another week.

Where is the public outrage at this government inaction affecting the lives of 3.4 million citizens?

Easy answer: More than half of Americans don’t even know (and quite likely do not care) that all Puerto Ricans are United States citizens, and have been since 1917. To many white Americans, including the president’s political “base,” Puerto Ricans, whether they live on the island in the U.S., are just brown-skinned, Spanish-speaking Latinos and as such are foreigners (or, perhaps worse, "immigrants") undeserving of government support.

Not that this should really matter, but every Puerto Rican under age 100 is a native-born American citizen.

At the moment, the situation in Puerto Rico is so dire that even the U.S. Postal Service, which has always been proud to claim it delivers the mail regardless of the weather or whatever other obstacle confronts it, is not accepting packages from the mainland U.S. for delivery to Puerto Rico. Its planes cannot land at San Juan airport, which can only handle a few flights a day. As a postal official explained to Salon, “We haven’t used sea transport for years to carry mail to Puerto Rico, only airplanes, and now they can’t land. The truth is we were caught flat-footed by these two hurricanes.” Even on the island, what mail is being sent locally can only be deposited and picked up locally at post offices — if they are even open. Local delivery service is nonexistent.

FedEx, which has its own fleet of planes, says it is likewise not able to make deliveries to Puerto Rico because it cannot land its cargo jets on the island, even at San Juan’s international airport.

It's not that the airport tarmac was damaged by the back-to-back hurricanes. The runways are fine. It’s that the entire electronics system for running a major airport — lights, radar, computer systems and so on — is down, causing the cancellation of hundreds of flights.

Again, the U.S. military has equipment that could fix this quickly. The Pentagon can airlift the materials and supplies needed to establish a high-volume airfield operation for military actions anywhere in the world, and on short notice. That equipment — mobile radar, air traffic control systems and lighting — could be brought to San Juan immediately by air and operations could be set up using military air traffic control personnel who know how to run it. The U.S. military set up a large operational airbase at Kobani, Syria, within a matter of days in 2015, taking over an abandoned airstrip there and airlifting in all the necessary supplies. If it can do that in a combat zone under primitive conditions, it could certainly return San Juan International Airport to functionality in similar time -- if ordered to do so.

The military is also equipped with state-of-the-art satellite phones and has many trained search-and-rescue teams equipped with helicopters. All of these resources are badly needed now to provide backup communications for Puerto Rico’s hundreds of blacked-out towns, and to locate people in remoter areas who may need medical evacuation or emergency food and shelter. So far all that work has been left to Puerto Rico's small National Guard unit, which doesn’t have the equipment or training of the U.S. regular military.

Clearly something is amiss.

New Orleans all over again?

Alfredo Lopez, a long-time activist in the Puerto Rican community in New York and author of several books on Puerto Rico’s colonial status, takes a dark view of the Trump administration’s inaction during this crisis, which the island’s governor has called apocalyptic. “It’s like New Orleans after Katrina,” said Lopez. “The U.S. government sees this hurricane disaster as an opportunity to push out Puerto Ricans and replace them with hotels and casinos.”

“Puerto Ricans are resilient people,” Lopez says, “but saddled with $72 billion in debt and with no real help from the U.S. government, I don’t know how a country like Puerto Rico can recover.”

Lopez's dark vision may be right. Eric Rodriguez, vice president in the office of research, advocacy and legislation at UnidosUS, a Hispanic advocacy group, said officials in Florida are bracing for what he says could be the "biggest resettlement flood" since the Mariel boatlift from Cuba in 1980, with Puerto Ricans fleeing their island home for the U.S., "not because they want to leave, but because they can no longer live there with no jobs, no electricity, no running water and no homes."

For those who wish to send aid to Puerto Rico, this site has a carefully screened list of relief organizations and charities that can be trusted to deliver the support as intended: National Organizations Active in Disaster