"We are doing a great job": Is this Trump's Katrina moment?

So far, Trump's response to the Puerto Rico disaster is to tell us he's doing an "amazing" job. Despite that ocean! 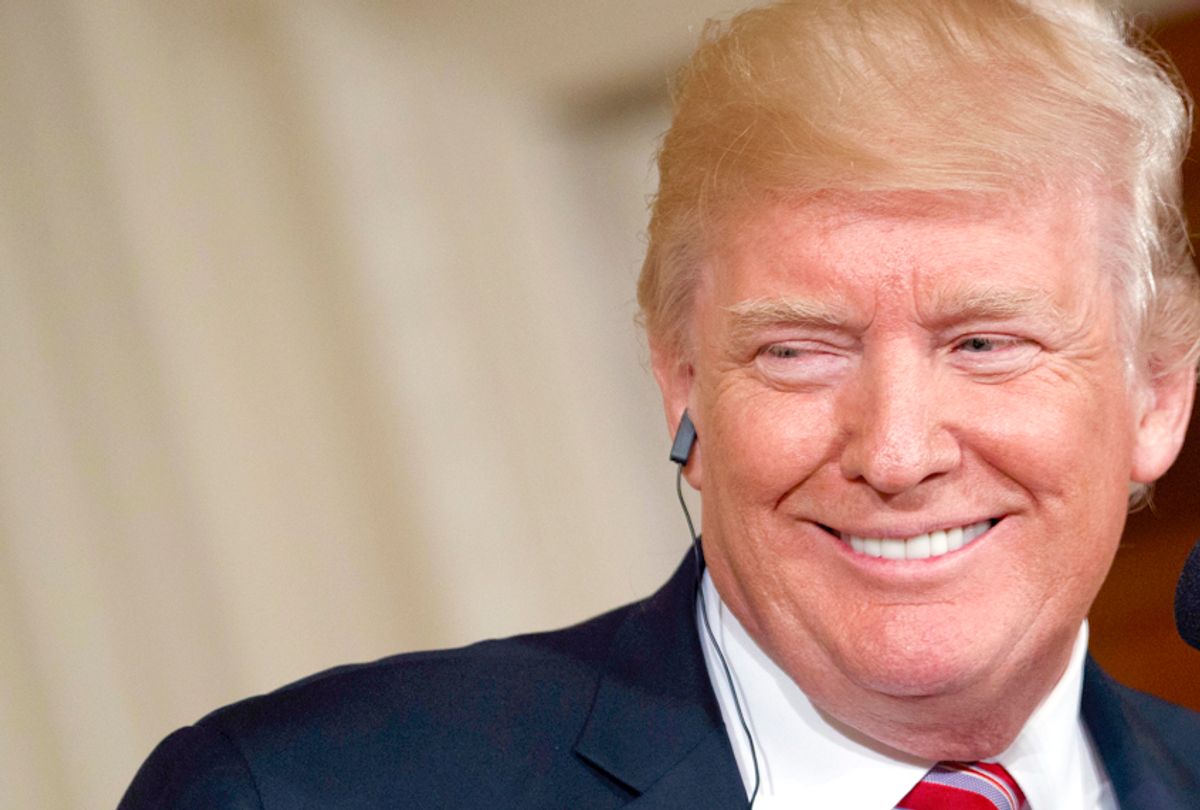 On Tuesday, Politico reported that Sen. Marco Rubio of Florida made a trip to Puerto Rico to assess the damage from Hurricane Maria:

Saying he needs to “raise the alarm” about Puerto Rico’s dire straits, Sen. Marco Rubio told the White House on Tuesday that the federal government needs to take over recovery efforts on the island quickly to prevent a Hurricane “Katrina-style” disaster in the U.S. territory.

“This has the potential of being a serious humanitarian crisis in a U.S. territory impacting United States citizens,” Rubio told POLITICO on Tuesday before delivering a similar message in a face-to-face meeting with Vice President Mike Pence. “There’s going to have to be a lot more hands-on federal engagement for us to be able to successfully carry out the mission.”

The White House announced that President Trump would be going to Puerto Rico and the U.S. Virgin Islands next Tuesday. In the meantime, no other American officials are allowed to go.

Rubio was not the only one to evoke the government's disastrous response to Katrina back in 2005. Rep. Elijah Cummings, D-Md., said this:

The administration belatedly announced two days later that they were sending the Comfort, a hospital ship. It leaves four days from now and will take another five days to get there.

Over the weekend, Puerto Rico's governor, Ricardo Rosselló, gave numerous interviews saying he hoped the government would send more than the bare minimum of help, even as he thanked FEMA and the military. On Monday the mayor of San Juan, the island territory's capital, tearfully begged for more assistance, saying that a humanitarian crisis was unfolding before our eyes.

Meanwhile, in between obsessing about NFL players protesting police brutality and insulting John McCain for refusing to vote for the latest Obamacare repeal bill, the president grudgingly tweeted about Puerto Rico, apparently suggesting that the island's debt problems had to be "dealt with" as a condition of disaster aid. On Monday he held a press conference with the Spanish president in which he claimed that Puerto Rican officials were telling "anyone who will listen" what a great job Donald Trump was doing:

[A] massive effort is underway, and we have been really treated very, very nicely by the governor and by everybody else. They know how hard we're working and what a good job we're doing. As Gov. Rosselló just told me this morning, the entire federal workforce is doing great work in Puerto Rico, and I appreciated his saying it. And he's saying it to anybody that will listen.

When asked for follow-up, Trump helpfully explained that Puerto Rico is "an island sitting in the middle of an ocean," which for some reason made it "tough" to get supplies there. But the main thrust of his comments was what a great job he was doing:

The governor of Puerto Rico is so thankful for the great job that we're doing. . . . The governor said we are doing a great job. . . . We have had tremendous reviews from government officials . . . and this morning, the governor made incredible statements about how well we're doing. . . . So everybody has said it's amazing the job that we've done in Puerto Rico, we're very proud of it. . . . I think we've done a really good job . . . and we are going to do far more than anybody else would ever be able to do and it's being recognized as such.

George W. Bush was vilified in the wake of Katrina for saying eight words that captured his obliviousness to the depth of devastation and horror: "Brownie, you're doing a heck of a job." He was of course speaking to his hapless FEMA director Michael Brown, who resigned shortly thereafter. Bush's approval ratings never recovered. Those words will forever be part of his legacy of failure.

Bush had been on a fundraising trip and was photographed with John McCain and a birthday cake while New Orleans was underwater and people were stranded on rooftops. It was seen as a political truism that no president could ever be caught short that way again. Trump had seemed to understand that lesson when Harvey and Irma hit, and although he is terrible at any aspect of the job that requires empathy or personal interaction with strangers, he and Melania dressed up in some casual gear and flew down to the disaster area to be photographed pretending to give a damn. It even boosted his lousy poll numbers a bit.

With Puerto Rico, other than to insist that everyone is incredibly impressed with what a terrific, fabulous, amazing job he is doing, he isn't even trying. For some reason, he doesn't seem to think the American people will hold it against him the way they held it against Bush when an American city drowned before their eyes.

That's the rub, isn't it? Donald Trump has never acknowledged that the 3.5 million people of Puerto Rico are U.S. citizens. He talks about how far away the island is and how big the ocean is that separates us. He never mentions that it's part of our country. As Amy Davidson Sorkin in the New Yorker put it, "instead of emphasizing that closeness, or a sense of mutual obligation, Trump has, so far, focused on how different Puerto Rico is, and what its people owe him, which is, above all, their gratitude."

Trump must not have heard Gov. Rosselló when he said:

I suspect that if the president were to focus on the job at hand instead of worrying about NFL ratings and his imaginary tax cut plan, if he were to address the American people with exactly that message, most Americans would rally to their fellow citizens.

Unfortunately, all we're getting so far is "Trumpie, you're doing a heck of a job." It remains to be seen if he will be held to account for this callous and shocking behavior or if this is yet another norm Donald Trump has blown to smithereens. Only 3.5 million lives hang in the balance.