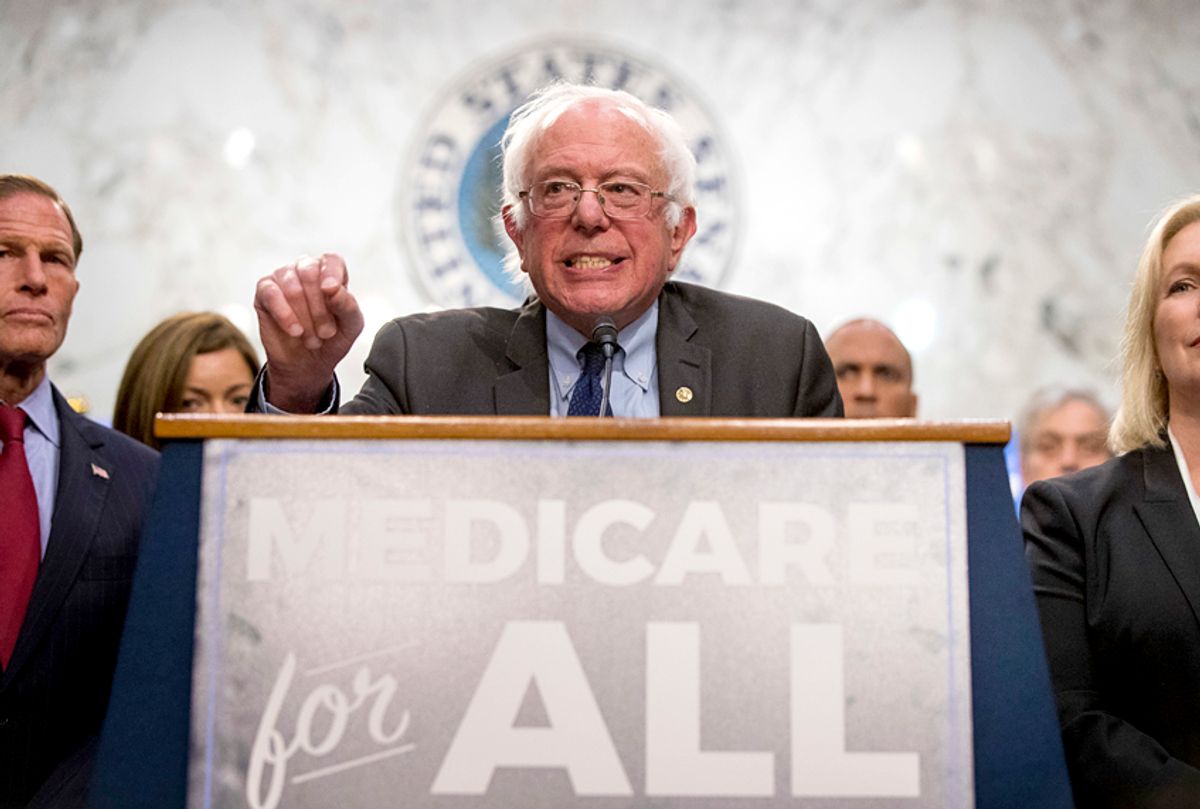 The country and California must move toward guaranteed health care for all, regardless of what happens next week when Senate Republicans vote on their final bill of 2017 to dismantle Obamacare and Medicaid, both Sen. Bernie Sanders, I-VT. and California Lt. Gov. Gavin Newsom said in separate San Francisco rallies on Friday.

“Every poll that I have seen indicates that more and more Americans support a Medicare-for-all single-payer program,” Sanders said to a rally organized by the California Nurses Association/National Nurses United Organizing Committee during its annual convention. “It is a struggle about what this great nation stands for. It is a struggle about whether or not every working person in this country has healthcare as a right, or whether we allow insurance companies and drug companies to continue to rip us off. It is a struggle about whether Congress listens to the American people or listens to the billionaires who make huge sums of money off of the current system.”

Sanders praised Friday’s announcement by Sen. John McCain, R-AZ, that he would not vote yes on the so-called Cassidy-Graham legislation that would deprive an estimated 32 million people of health coverage over the next decade and deprive states that expanded Medicaid under Obamacare of tens of billions in federal funds over the next six years.

“But even with Sen. McCain’s opposition, our struggle on this legislation is not over,” he told a crowd of several thousand. “While we have got to wage an all-out battle to defeat this horrific legislation, we’ve also got to understand that in terms of health care, maintaining the status quo is just not good enough. Our job is not just to prevent tens of millions of Americans from being thrown off of the health insurance they currently have. Our job is to join every other major country on earth and guarantee health care to all people as a right and not a privilege.”

Sanders' remarks addressed the near-term crisis of the Senate GOP’s bill to dismantle health safety nets and his solution, Medicare-for-all legislation, introduced this month with 16 Democratic co-sponsors. While he called the Cassidy-Graham legislation “cruel” and “immoral,” Sanders also laid out the case for his proposal, which would expand and gradually lower the age that individuals could be covered by Medicare, the federal program for people 65 and older.

“Today, we begin the debate vital to the future of our economy,” he said. “The function of a rational healthcare system is to provide healthcare to all people when they need it, and not to argue with the insurance companies as to whether or not they are covered for the procedures that they paid for. Today, we say to those families in California, Vermont and all over this country, who are spending $10,000, $15,000, $20,000 a year on health insurance, that we know that this is an insane amount of money to be paying in order to protect your families. And we are here to tell you that under a Medicare-for-all single-payer system the cost of health care for the average middle-class family will significantly decline and that family will be much better off than under the current dysfunctional system.”

Sanders also warned the crowd not to believe the coming wave of disinformation defending the status quo.

“Now, my Republican friends will tell you that you may have to pay more in taxes, and depending on your income, that’s true,” he said. “But what they won’t tell you is that you no longer have to pay that $5,000, $10,000, $20,000 a year to the private insurance companies. And today we tell the drug companies, we are sick and tired of being ripped off by your greed . . . And we say to the small business community, get on board Medicare-for-all because it’s going to benefit you substantially.”

Newsom, a former San Francisco mayor and 2018 gubernatorial candidate, worked to create a citywide public healthcare while he was mayor. In 2016, he urged the Democratic National Committee to include Medicare-for-all in its platform. Unlike many Democrats who advocate for reform, he has a record of achieving it.

“I made a commitment — firm,” Newsome said after his speech, speaking of his pledge to revive the statewide single-payer bill if he is elected governor—and to push for it in the legislature before then. “This is an expectation game that I will match: that I will, day one, and I know that’s a rote cliché, but day one [if elected] hit the ground running on leading this effort. It’s not a nice-to-have conversation; it’s a must-have conversation.”

While Sanders spoke in broad strokes about the need for national healthcare reform, Newsom spoke about the specific impacts that both the Graham-Cassidy legislation and status quo of ongoing healthcare cost increases were having on California.

“We are on a cusp of a potential tsunami the likes of which we never could have imagined with the Graham-Cassidy bill that will potentially impact 6.7 million Californians by 2027, and depending on the studies, as much $78 billion [in lost federal healthcare funds] by 2026, the low end being $57.5 billion, and that’s a game-changer,” he said. “That requires an order of magnitude shift in the way we approach health-care policy. We can’t play in the margins with a bill like this coming down the pike.”

But even if the Senate Republican bill doesn’t pass next week, Newsom said California healthcare spending was unsustainable.

“You can’t afford to continue doing what we have done,” he said. “Healthcare is devouring the [state] budget. There’s no sector of our budget is growing more significantly than healthcare. The budget in California is a healthcare budget. The UC [University of California] budget is a healthcare budget. The CSU [California State University] tuition increases that we debated just three days ago; it’s a healthcare tuition increase. The private sector: you want to talk about wage suppression in this country? We could talk about globalization and technology, all profoundly important, why aren’t people talking about healthcare?”

Democrats were mistaken to be avoiding this debate in California and for criticizing Sanders’ efforts, Newsom said.

“This whole idea that we can only do one thing at a time is insulting not just absurd,” he said. “Somebody said to me that Bernie Sanders is going to debate the Graham-Cassidy bill on CNN [next week] and Democrats are upset. Because we have someone who actually has an alternative? A positive alternative? Maybe that’s fundamentally the problem with the Democratic Party. It goes to the core of what’s wrong with our party. We have no positive alternative vision. And here we have a positive alternative vision that includes all Americans to reduce costs, provide quality care and advance a principle that’s been advanced around the rest of the world successfully, and people are critical of the fact thst he should just be playing defense. That’s hardly an aspiration — defense. We need an offensive strategy. I think it’s very healthy. You can do both.”

When asked what was preventing single-payer from moving ahead in California, Newsom was quick to reply.

“The unknown,” he said. “This is not small ball. Everything we are talking about: SB-562 [the stalled bill] is a tectonic plate. No one is denying that . . . It’s the issue that defines our time, public and private. So what is significant about it is we have had a system that everyone is recognizing can no longer continue to thrive, let alone survive, and that requires some new thinking. That requires winners and losers and that’s the answer to your question. There are winners and losers in this debate.”

As Sanders reminded the crowd several hours later, the pharmaceutical industry spent $128 million in California to defeat a proposed 2016 state ballot measure that would have required drug companies to charge state agencies what they currently charge the federal Veterans Administration, which negotiates bulk pricing.

“Let me conclude by saying this,” Sanders said. “This is the year 2017. For decades, great Americans from FDR to John F. Kennedy have talked about health care as a right. After decades of talk, now is the time to get it done.”