Conservatives are going crazy over a faked NFL protest photo

Fake news strikes, and conservatives are duped by a manipulated photo about protests 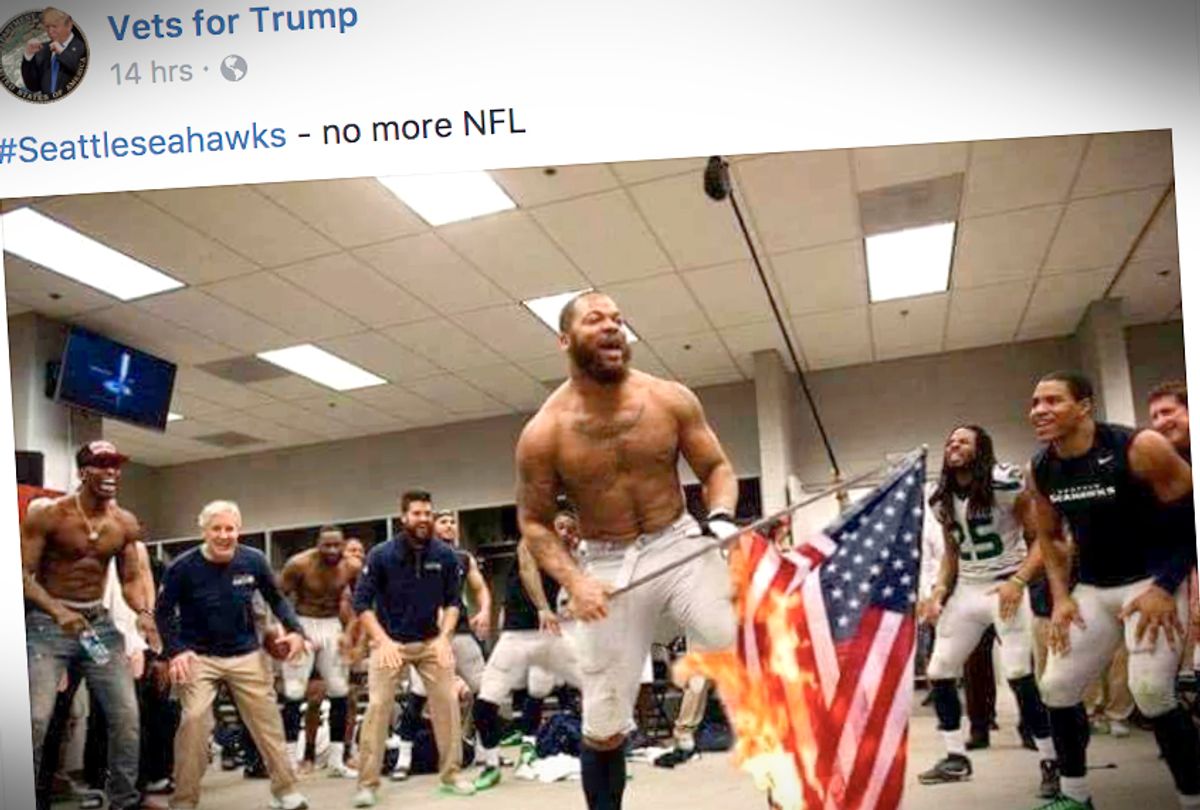 Anyone with a Facebook profile is likely to have at least one or two friends who compulsively share factually challenged content. Whether they’re schemers consciously trying to incite controversy or just witless netizens hoodwinked by anything that affirms their beliefs, social media users have become the agents of lies and propaganda.

Amid protests by NFL players this week, who have either stayed in their locker rooms or have taken knees during the national anthem, social media has become once again a platform for the distribution of fake news and incendiary memes.

Late Thursday, a post appeared on the Facebook group “Vets for Trump” showing a digitally manipulated photo of Seattle Seahawks defensive lineman Michael Bennett happily celebrating in a locker room wielding a burning American flag as other players appear to be cheering him on.

As far as Photoshop work goes, the work is amateur. Bennett’s arm looks atrophied and out of focus while the flaming flag isn’t putting off any smoke. The original image from the Seattle Seahawks is quite different.

But many on social media seemed to believe the image was real.

“You may be a bad man on the football field...but burning the Flag that I shed my blood to honor would be just cause to whack you upside your ignorant disrespectful head,” wrote one of the Facebook group’s members.

THE PROTESTS ARENT ABOUT OUR FLAG???

Whether people were savvy enough to detect the digital trickery or not, the Facebook post was shared more than 2,600 times and garnered more than 1,300 comments as of Friday morning. Most comments expressed disdain for NFL players that participated in the #TakeAKnee protests of police brutality against African-Americans. Some acknowledged the image was fake.

The Seahawks and Tennessee Titans joined other NFL players participated Sunday in the demonstrations by remaining in their locker rooms during the national anthem. Bennett became a specific target after criticizing President Donald Trump’s comments about the protests.

Bennett became the focus after he criticized the way President Donald Trump handled the controversy. The president has tweeted dozens of times over the past week in an attempt to stir up division. Some have argued that the president is using the NFL protests to drum up support from his core supporters.

On Wednesday, Bennett appeal for decency.

“I would like to challenge every American that is watching this show to treat people better,” Bennett said during a CNN town hall event. “That really is what it's about. It's about treating people like human beings. That's the first step.”

Another step that could be useful: Social media users should stop being so gullible.