Does “American Made” really glorify drug smuggling and weapons dealing?

Tom Cruise borrows the tale of Iran-Contra's drug-running spook, Barry Seal to tell a story about daring in midlife 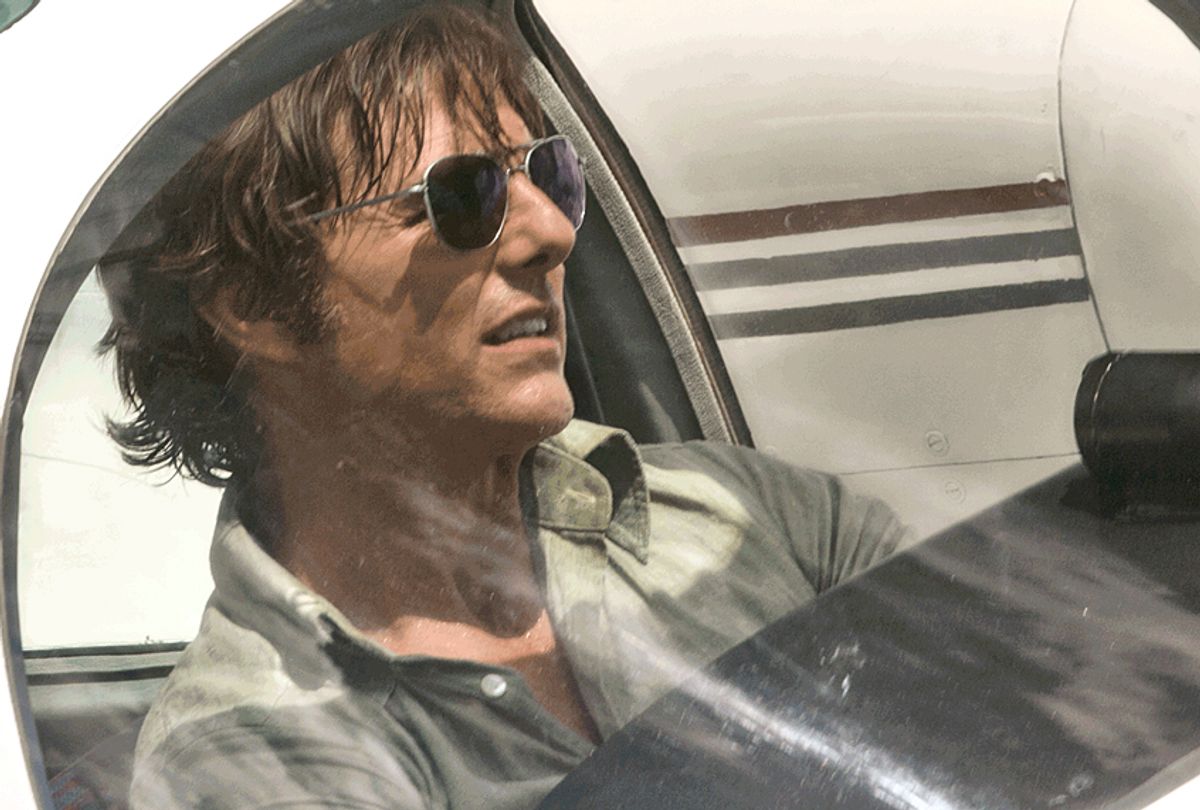 Tom Cruise as Barry Seal in "American Made" (Universal Pictures)
--

In “American Made,” the new run-and-gun Barry Seal biopic from Doug Liman (“The Bourne Identity,” “Mr. & Mrs. Smith,” “Edge of Tomorrow”), Tom Cruise plays Seal, the real-life commercial pilot who became a drug smuggler for the Medellin cartel and then an undercover operative under the Reagan administration.

Seal was from Baton Rouge, Louisiana, and Cruise plays him with the sort of Southern accent that sounds like someone who’s not from the South speaking in a Southern accent. And that’s about as far as Cruise sinks into the role. He doesn’t gain weight to imitate Seal’s paunch. Nor does he push his impressive hairline back so that it resembles Seal’s. Even his wardrobe is barely period attire: He wears dark timeless jeans and washed button-downs that are vaguely cowboyish in their cut and wrinkle. He might even have borrowed a few shirts from his character in “Knight and Day.”

The performance is unconvincing, but that seems intentional. This is Tom Cruise as Barry Seal as Tom Cruise. You know, the action hero who was donning aviators, bedding bombshells and shooting down bad guys on screen during the actual Iran-Contra affair? The guy with the million-dollar grin, intrepid eyes and maniacal commitment to honing his characters’ skillsets? All the Cruisiness that audiences have come to expect is baked into Cruise’s Barry Seal and captured in intimate bursts by Liman’s frenetic handheld camera.

Liman shoots the movie in the style of an old music video, with lots of jump cuts, colorful text and constant motion. There’s even some “Schoolhouse Rock”-type animation. Interstitched is Seal in the future, recording his story on a batch of grainy homemade VHS tapes. The rest could be the way Seal remembers it: in bursts and flashes.

Does Liman glorify those things? On the surface, sure, but it’s not that simple.

From takeoff, the story is in heavy turbulence. “American Made” begins with Seal, bored by flying commercial planes, opting out of the job’s comfort and security for a hazy, unsanctioned adventure with the CIA. As he’ll reflect in one of the homemade tapes, he probably didn’t give it enough consideration. That’s how this adventure goes. One foot in front of the other, gut, wallet and dick guiding the way.

Seal’s lack of forethought foreshadows an unhappy ending. As does history. But “American Made” is “Goodfellas” or “Casino” without the long, dark third act. You know the figurative plane’s going down, but when it does, it just nosedives; the ride’s all over before you can pull your oxygen mask down and really struggle for air.

The way Liman condenses a seven-year period into 115 minutes is clever. The movie is bookended by two era-defining American political moments — Jimmy Carter’s malaise speech and the Iran-Contra scandal — and Seal’s trajectory is framed reflecting that of the country. As voters are rejecting President Carter’s condemnation of excess and electing the country’s first movie star president, Seal is rejecting stability and modest, legal living in favor of bags full of cash and a movie star lifestyle. The film, with its tight shots and loose footing, has the feel of a highlight reel labeled “The Good Old Days.”

That the good old days come to an abrupt, blazing end doesn’t make them any less glorious to relive. It’s always the come-up that sticks. Which helps to explain characters like Seal and government operations like Iran-Contra. Everyone wants to imagine themselves as Tom Cruise. That’s the American way.