Tucker Carlson loses the debate on its merits, then gets personal 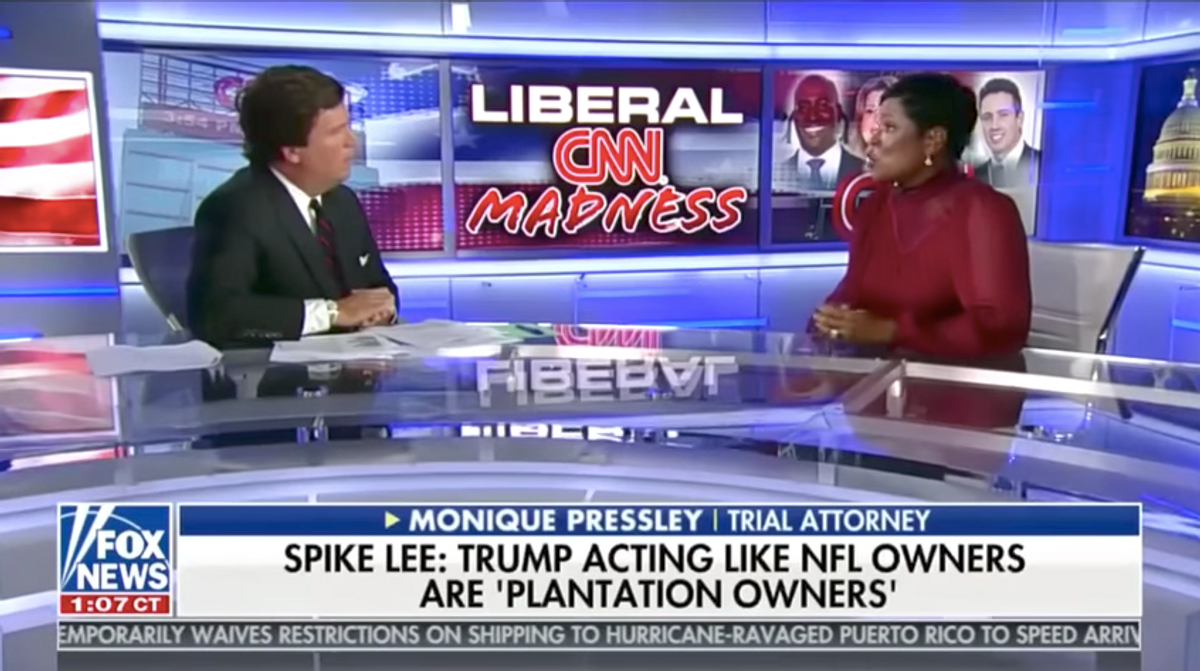 Fox News host Tucker Carlson attempted to defend President Donald Trump's demands that NFL players should be fired for protesting during the national anthem, but his guest left him looking like a fool on his own show.

Carlson was enraged that Spike Lee had compared Trump's rhetoric about NFL players to be reminiscent of language heard on a slave plantation.

"When you have someone like that on, who said something racially inflammatory and untrue, you should push-back a little bit when he theorizes about how this is about the plantation mentality on the basis of no evidence," Carlson told his guest, Monique Pressley, a black attorney. "If you’re a journalist you’ve gotta say, Whoa, can you prove that?"

But Pressley was having none of it.

"He didn’t theorize," Pressley responded. "He used an analogy, and using an analogy that actually came to the minds of many people in African American communities and Caucasian community and Latino or brown communities." She went on, despite repeated attempts by Carlson to interrupt her:

When our president, the president of this country, referring to African American citizens, taxpaying citizens who are gainfully employed, making good money in this country in the NFL as professional athletes — when he referred to them in the manner he did, as 'sons of bitches' and said that ‘the owners ought to get those sons of bitches out of there, 'just drag them out of there,' that language makes it seem like these owners have a proprietary interest in the bodies of these African-American athletes.

Carlson pivoted to his guest's credentials, questioning her education. "You know what, I don’t know what school you went to, but don’t give me that postmodern nonsense," he said, while talking over her.

Pressley informed him she attended Howard University School of Law, but he waved that off too.

"Whatever, spare me," he said.

Pressley continued to accentuate her point about the president's rhetoric, but to Carlson, that's just "his opinion."

She explains fear of police in black communities

He calls her a crackpot pic.twitter.com/T2ERIY5LMS

"That is your opinion," Carlson said. He added, that he hopes it's not the majority opinion in America because he deemed it was a "crackpot — with respect — theory."