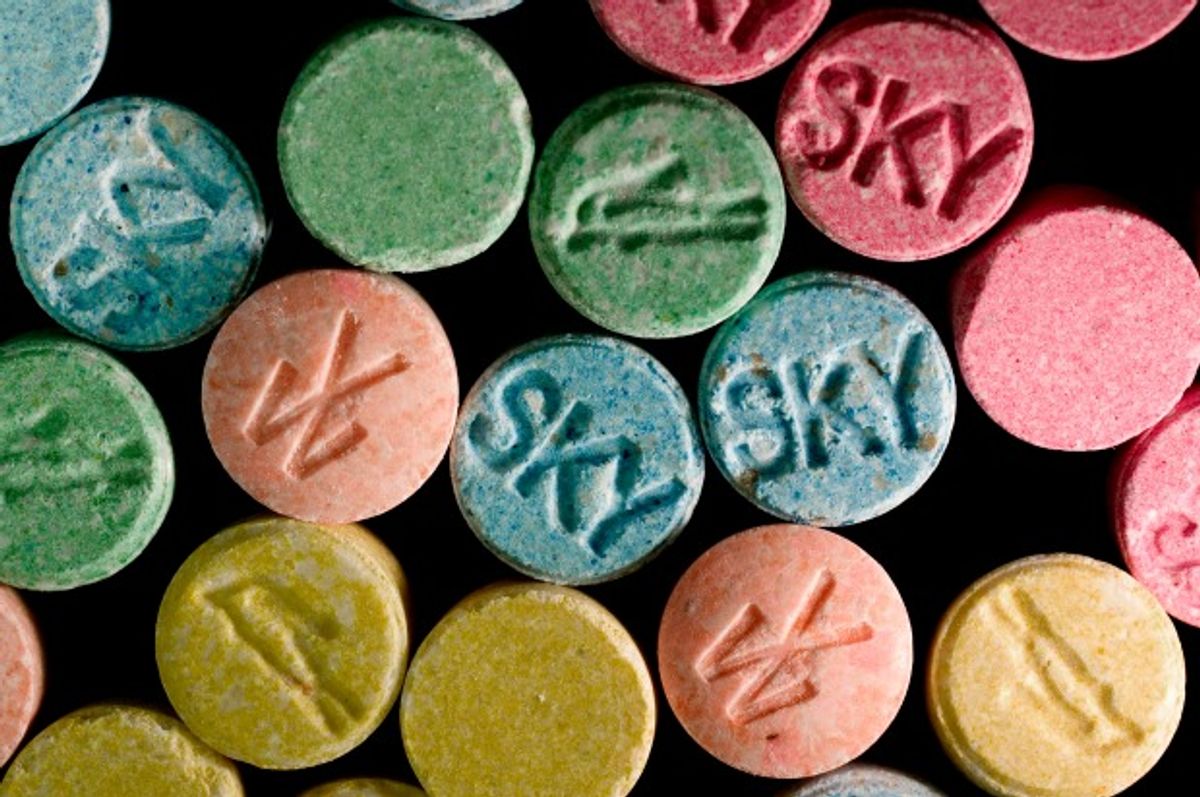 Ecstasy pills, which contain MDMA as their main chemical (DEA)
--

For the nightly news and cop shows, Ecstasy is the scourge of music festivals, the substance of interest in raves and DEA raids. For veterans of war, survivors of abuse, and autistic people, the drug increasingly suggests a feeling of tentative hope.

Each weekend, thousands of electronic music lovers dance and sweat under the empathogenic effects of Ecstasy, or Molly. This illegal drug is famous for generating feelings of love and connection between people from all walks of life, and may now be put to use for patients in whom these connections are pathologically broken.

In April 2017, the FDA approved MDMA, as a “breakthrough therapy” in the treatment of post-traumatic stress disorder. The designation comes after 10-plus years of research and pressure from numerous angles, including psychotherapists and legal-cultural advocates such as MAPS, the Multidisciplinary Association for Psychedelic Studies. Although this endorsement was hard fought, the early evidence is impressive: MDMA used in conjunction with trained psychotherapists can have significant, positive and long-lasting effects for patients suffering from PTSD. And now, there is hope this remarkable effect can be utilized to treat additional diseases of dissociation and social stress.

Following the successes of MDMA for PTSD patients, doctors Alicia Danforth and Charles Grob suggested the drug may have a similar therapeutic potential for a surprising group of patients: adults with autism.

In the United States, one out of 68 children is diagnosed as being on the autism spectrum, an umbrella developmental disorder primarily indicated by difficulties with social interactions, sensory hypersensitivity, and repetitive behaviors. Psychotherapists who work with people with autism know that early intervention is the most important modifier of a patient’s progress, and they have many tools to improve patients’ quality of life remarkably. Unfortunately, many patients with autism also suffer from a number of comorbid issues, including anxiety, trauma, depression, and most commonly, difficulty with social adaptability.

These issues present two major problems for the psychotherapeutic approaches which therapists typically apply. The first, patients with autism tend not to respond to commonly used drugs for anxiety-like behaviors, such as SSRIs and Benzodiazepines. Patients without autism will often use a combination of prescriptions and therapy to treat these clinical diagnoses. But for those with autism, whose social interactions are complicated by their disorder, it can often be difficult to form the extremely important “psychotherapeutic alliance” between therapist and patient.

Fortunately for these patients, there is a compound currently flirting with acceptance in the medical pharmacopeia which seems likely to ameliorate both of these concerns: MDMA.

MDMA is still illegal in the US, and patients with autism should be cautious about advertising from the rooftops their surreptitious experiments with the drug. Nonetheless, while conducting her research, Danforth found an exhaustive repository of anecdotes and first-person drug accounts exactly where you’d expect: on internet forums and message boards.

Although these user reports were far from academic in style, Danforth’s overall impression was that most patients who had tried the substance found it useful, from “increased feelings of empathy [and] connectedness” to “more comfort in social settings.” According to some of the reports she found, these effects could be felt for months or years following a single experience with MDMA.

These impressions were bolstered via more thorough survey answers Danforth and Grob collected from 150 patients in 13 countries. Strikingly, there was not a single report of a serious adverse effect from taking the drug, despite the unscientific manner in which the drugs were taken. In addition to the anecdotes, Danforth and Grob also propose that the known (but incomplete) physiology of autism and social anxiety disorders may be directly affected by the known neurological effects of MDMA.

For example, MDMA has been shown to robustly increase oxytocin levels in the mammalian brain, where the neurohormone  promotes positive social affiliations in mammals. Scientists know oxytocin levels are reduced in brains of people with autism. Danforth and Grob suggest the MDMA experience in conjunction with therapy may serve to correct this deficiency, reducing social anxiety.

For the two doctors, the stage has been set: MDMA has been used successfully in combination with psychotherapy for patients with PTSD, and autism-based social anxiety is a disorder with no effective treatment currently. Based on neurophysiological and anecdotal research, psychotherapy assisted by MDMA may be one treatment option. Danforth and Grob have suggested a clinical trial to test the safety and efficacy of this therapy, and they raised funds for it themselves, since most granting agencies are hesitant to support such a controversial experiment.

Because it is an illegal drug, MDMA comes with a pervasive stigma, even among psychotherapists. Some autism advocacy groups are staying neutral on the topic until Danforth gathers new evidence, but others, such as the Autism Science Foundation, have spoken out strongly against the research in the past. The foundation maintains MDMA is neurotoxic, citing an old paper which has since been debunked and retracted. This neurotoxicity paper continues to spread scientific misinformation even after it was shown the authors massively overdosed the monkeys used in the experiment, likely with methamphetamine instead of MDMA.

Nonetheless, ethically, Danforth and Grob’s proposed study raises some concerns. MDMA can induce an intense experience, which patients with autism may be less well-equipped to handle than other types of patients. Additionally, the study requires adult patients who give their informed consent, but acquiring this informed consent from people with autism remains controversial in the field. Like all psychological experiments, the putative positive outcomes must be weighed against the potential for negative impacts for the study patients. In this case specifically, there seems to be a wealth of evidence that MDMA-assisted psychotherapy has a low risk of serious adverse effects, and a high potential for alleviating the social anxiety which so often afflicts patients with autism.

Danforth and Grob began their pilot study in March of 2014 with cautious optimism. As of July 2017, they have prescribed MDMA and psychotherapy for 12 adults with autism and comorbid social anxiety. They are currently preparing these results for publication, which will help determine whether more clinical trials will follow.

Both doctors are quick to point out that this treatment would not be a cure for autism. However, if taking MDMA in the presence of a trained psychotherapist helps alleviate the social phobias so often found in combination with autism, the treatment could improve the lives of millions of people across the United States. Of course, even if their results show dramatic improvements for the patients, convincing the public that there are medical benefits to a Schedule I illegal drug often featured negatively in the news would present an entirely separate challenge.

Gregory Logan-Graf: This is very interesting and I hope that it can be an effective therapy for individuals on the autism spectrum. But before I get too excited, I’m reminding myself that the drug approval process is notoriously long, and most drugs don’t make it through clinical trials, because they are found to be ineffective or harmful under controlled settings. Not to mention the policy changes that would be required to get an illegal drug with such a negative stigma on the market. I’d be surprised to see it at the drug store anytime soon. But if it is found to be effective, I’ll keep my fingers crossed that politics don’t get in the way of its approval and future use.

Daniel Bear: This is a balanced, cautiously optimistic take on an issue that lots of people feel strongly about. That’s what we need more of in the world!

One thing that might help people accept the idea of using schedule I drugs therapeutically is to point out that many (most?) of the pharmaceuticals we use today were originally developed for another purpose. The history of why certain drugs are illegal can be illuminating, too – and often shows that it has little to do with danger and everything to do with politics.