There might be a bondage camp near your local Renaissance Faire 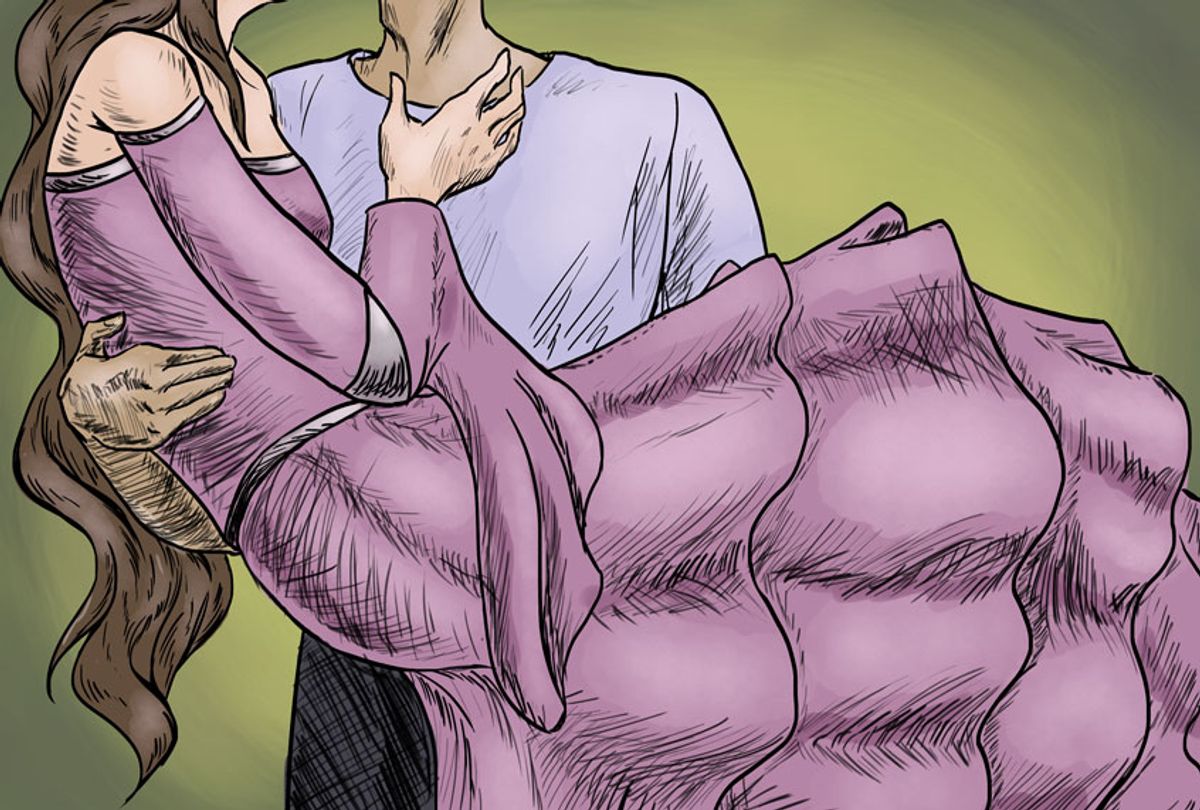 Having gone to my first Renaissance Faire (in Tuxedo Park) last weekend, I couldn’t help but notice the ample cleavage, the obvious interest in fantasy and role-play, and the leather — so much leather. Sex had to be a part of the experience for some of the adults who attended. A hookup culture and relevant meetup groups seemed more than likely.

There were around 200 “Renaissance, Medieval, and Pirate Faires” taking place across the United States as of 2015, according to Renfaire.com’s directory, with some of the larger events, like the Pennsylvania Renaissance Faire, attracting close to 250,000 people annually. Of course, this means there’s a group for Ren Faire enthusiasts on Reddit.

Twisted_Janey has visited the Pennsylvania Faire since she was 22, and this year was her first meeting with a group of kinksters who use “a couple of subtle garb additions that signal us out to others in the kink community.” These include “a leather patch in the shape of the FetLife heart” and “a combination of black, red and purple ribbons incorporated into the garb.” While Twisted_Janey doesn’t act out a period- or fantasy-based character at the Ren Faire, like many other dedicated attendees do, she does have a “variety of corsets and skirts” she mixes and matches to create costumes. A “pirate hat” turns her into a pirate, and a sword makes her a warrior.

Others are more interested in the intersection of kink and the historical aspects of the Renaissance. Ron Murphy, a 40-year-old Pennsylvania man who appears bearded and bespectacled in his FetLife pictures, majored in history in grad school. “As an historian, Ren Faires are a fun way to visit an anachronistic past,” he messaged me on FetLife.

Murphy attended his first Ren Faire when he was in his 20s. “I was hooked!” he said. “Women in seductive dresses, offering themselves to the nearest man. Of course I knew this was all drama, but the fantasy of a beautiful woman willing to be with you was very appealing.”

“The layers to undress,” Murphy explained. “It forces you to take time with the person so it becomes a conquest rather than merely a sexual experience.”

However, Scott mentioned that kinksters at the fair “will carry whips, floggers, cuffs, and paddles . . .  On occasion there will be St. Andrews crosses [an x-shaped setup with appendage-binding at every end] and pillory [better known as ‘the stocks’].”

One is more likely to find gear like that at a faire-adjacent bondage camp. Scott has visited the one by the Texarkana Renaissance Faire and speaks highly of it, though he doesn’t camp there because he has a “broader range of friends” with whom he visits the Faire.

“Activities will generally include spanking, flogging, various forms of binding, etc.,” he said. “To varying degrees there may be cutting, humiliation, possibly suspension [depending] on what equipment is there. There will almost assuredly [be] some ‘service’ activities, like a cigar lounge and boot blacking.” Campers may participate in a variety of these activities or simply act as voyeurs, a form of participation in its own right.

Joanna, a 50-year-old woman located in Houston, has been helping run the Texarkana bondage camp for eight years. (It’s been around for nine.) A self-described dom, she goes by the FetLife handle HellKittenJ, where her profile picture (as of this writing) shows a cartoon man with a tuba stuck in his ass, captioned, “‘A butt tuba’ spelled backwards is still ‘a butt tuba.’” In past profile pics, you can see that Joanna is a busty blonde with a passion for flogging and creating both small- and large-scale sculptures.

Joanna said information about the camp spreads by “word of mouth, and I have a Facebook and Fet[Life] presence.” Since campers come from all over the state, Joanna’s role also includes trying to “hook them up with kinksters from their area.” She also teaches at the camp (“whip stuff or fire flogging”) and spreads the word about events during the festival. She used to have to bring her own dungeon over in an uncovered truck, which caused some problems when it rained or there were “too many vanilla folks” around.

“I now have a group of friends who bring a dungeon from the Beaumont area, so I do not have to do that any longer,” she said. “Thank the gods! Lol.”

Though Faires welcome all kinds of nerdy subcultures, kinksters who attend make a point of respecting “vanillas.” Joanna showed me a map she drew of the bondage camp, complete with tent camping areas with the side note, “Fill in so no vanillas get close ☺.” In other words, bondage campers are encouraged to pack in as a visual buffer from the non-BDSM practicing public.

“We do not want to push our kink on vanillas,” she explained. This year, though, HellKittenJ may take a man around on a leash during the fair. “I have a bottom coming in from Atlanta, and I may have to do something like that for him.”

Recently, Parker flew to Pennsylvania to attend the same Renaissance Faire she attended as a kid, this time for her bachelorette party. With mead flowing and entertainers like the “rakish rogues” who are essentially paid to flirt with fairgoers (especially the ones dressed up and there for a bachelorette party), Parker and her friends had a blast. In telling me about her latest Ren Faire weekend, Parker recalled a strange sight she witnessed at her very first Faire.