Corporations in Puerto Rico have done little or nothing to help

Many of the island's private firms have power, internet and phone service. They don't want the neighbors to know 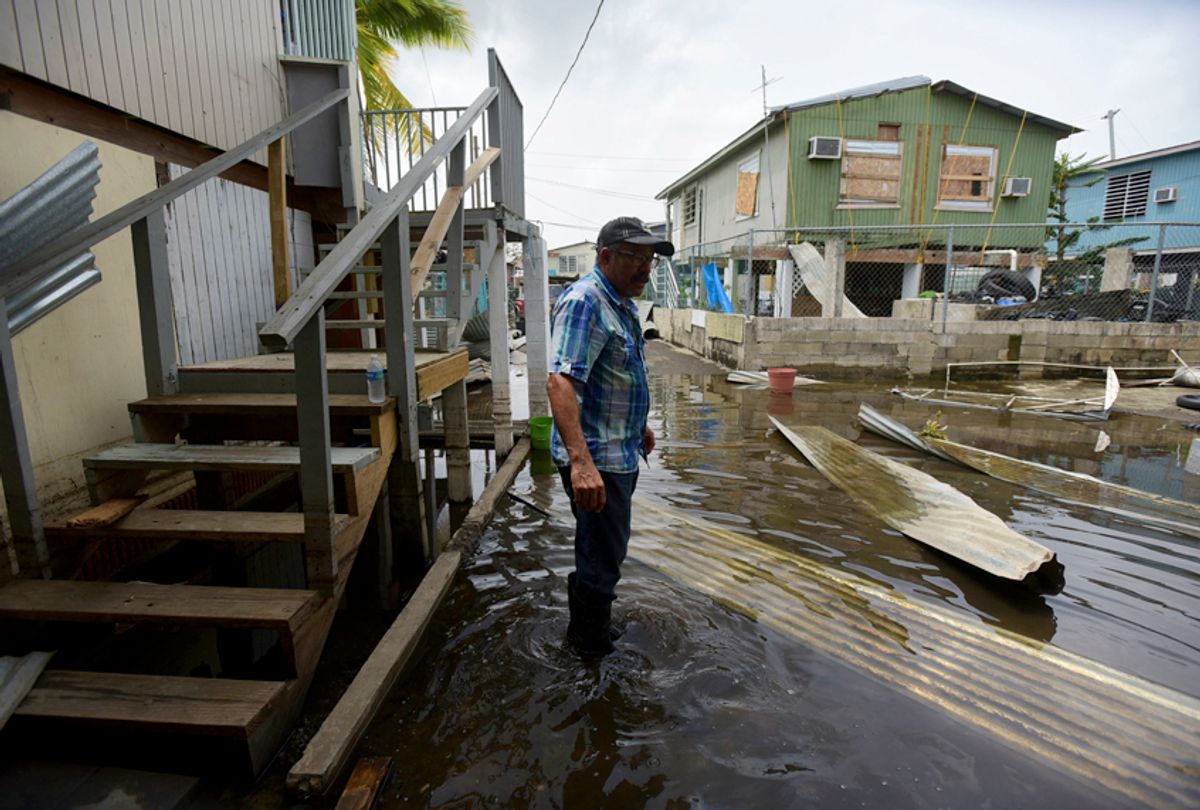 A flooded area after the passing of Hurricane Maria, in Puerto Rico, September 27, 2017. (AP/Carlos Giusti)
--

The Trump administration is not the only entity that has been missing in inaction in Puerto Rico in the wake of the island-wide destruction caused by back-to-back direct hits from two major hurricanes. The island’s many “corporate citizens” have thus far been looking to their own interests during this crisis.

While communities across the island have rallied, rich and poor alike, to help one another survive, the major companies scattered across the island, aside from donating funds to relief efforts, or having their parent corporations do so, have largely focused on themselves. This includes firms like Medtronic, Univision, Destilería Serrallés (makers of Don Q Rum), DowDuPont, AstraZeneca, Merck, Industrias Vassallo, Puerto Rico Iron Works, Walmart, and banking firms like Triple-S Management and First Bancorp. Most if not all of those have disaster plans in place that include generators and satellite communications capability to stay in touch with suppliers, customers and branch locations across the island and headquarters in the mainland U.S. Overwhelmingly, these companies are focusing on getting back into production and locating and helping their own employees.

That is all understandable. What may be less understandable is that these companies, which generally have telecommunications capability and access to the internet at a time when the vast majority of Puerto Ricans do not, are not advertising that fact to local residents of the regions around their facilities.

One of the great torments and preoccupation for Puerto Ricans, both on the island and in the mainland U.S., is the near-total inability to get news from relatives and friends in the blacked-out parts of the island. At this point, that's about 97 percent of Puerto Rico. Those people can't call out to say that they're OK or that they need help. Furthermore, in most cases they can't reach San Juan or other major towns and cities by road; downed trees and washouts have made most routes impassable on the mountainous 110-mile by 40-mile island.

I spoke with the head of public relations for one global firm that has a significant plant in the center of the island, in the mountains north of Ponce, an area that had been literally run over by Hurricane Maria’s eye. I had called the plant and discovered that, unlike the whole surrounding area, its phones were working fine. I asked the company flack why his firm wasn’t making its phone and internet services available to locals so they could contact anxious relatives.

Insisting on speaking off the record, he said, “We’re focused on locating and helping our own employees right now, many of whom we haven’t heard from yet.” With no local phone service or electricity, he said, the firm is reaching out to those employees by running announcements on the local radio station, which is up and running with a generator.

Why not just open an office with phones and a few computers so nearby residents can come in and contact loved ones? His reply: “Well, that would raise security issues.”

OK. Security issues. Surely the company has security guards who could stand in the office to make sure the computer hardware doesn't walk out the door, if in fact the public would even permit such a thing to happen to a vital public service. And as for concerns about security of the company's computers, that's what "guest" access, which many companies, including hospitals, universities, hotels and large retail firms offer their visitors customers and visitors, is for.

While we’re at it, why hasn’t Dish TV, which provides its subscribers with satellite dishes for its service, simply flown in satellite dishes and donated internet service to all 78 municipalities in Puerto Rico? Hell, they could deliver five or 10 dishes to each community, so that everyone could at least come to a central location with their computers and smartphones and get online. It’s a no-brainer. Dish could even throw in some generators to make the systems work.

But that’s not the way corporate America thinks these days. After all, where's the return for them in helping poor people in a bankrupt colonial outpost call their relatives?

So far, no company operating in Puerto Rico appears to be stepping up to the plate and making its satellite uplink systems available to anyone outside company personnel.

In that respect, these corporations appear to be taking their lead from the corporate executive in chief in the White House, who keeps talking about the challenge of aiding Puerto Rico because of the island’s “massive debt” of $74 billion. This is especially ironic in Trump’s case. Puerto Rico cannot deal with its debt because it is not allowed by Congress -- or by the fiscal control board that Congress and President Barack Obama placed above the territory's elected government -- to declare bankruptcy and renegotiate its debt under the aegis of a federal court, as municipalities and private companies can do in the mainland U.S. Puerto Ricans may perhaps be forgiven for not wanting to be lectured by a man who made much of his fortune by serially running his businesses into bankruptcy and stiffing his creditors.