The wind shifts on abortion: A Republican governor leads the way

Illinois' GOP governor defies the right by allowing Medicaid to pay for abortion, and that's just the beginning 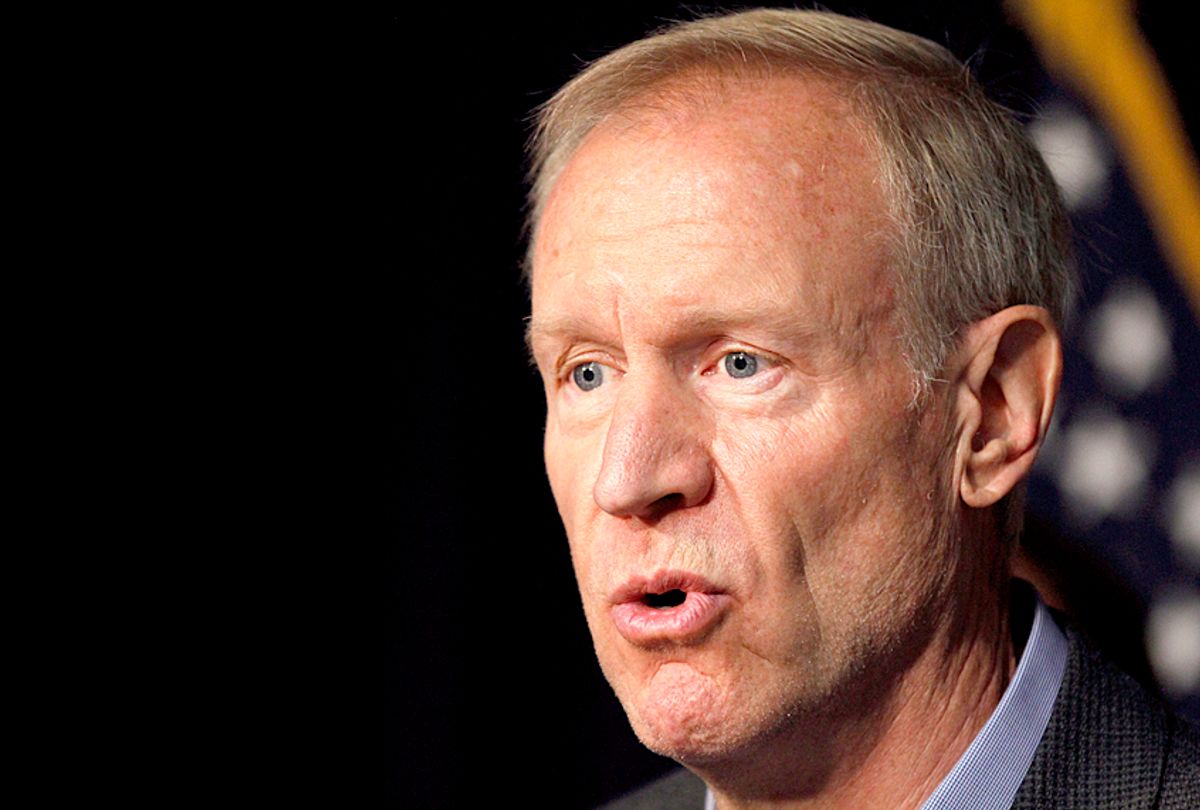 While Republicans in Alabama just nominated Roy Moore, a theocratic Christian "dominionist," as their Senate nominee, the Republican governor of Illinois, Bruce Rauner, just made a startling move in bucking the religious right. Thursday, Rauner signed a law written by Democratic legislators that allows the state's insurance programs, including Medicaid, to cover abortion. It also ended the state's "trigger law," which would have banned abortion if Roe v. Wade were ever overturned by the Supreme Court.

In his statements defending the decision, Rauner emphasized his long-standing support for abortion rights, saying he believes "that no woman should be forced to make a different decision than another woman would make purely based on her income."

The fact that an elected Republican was willing to fund abortion care reflects a quiet but important shift in the shape of abortion discourse. After years of work, reproductive rights activists are finally getting politicians to understand that abortion access is about more than the legal right to abortion but also about the physical and financial ability of women to get abortion care.

"By signing this bill, it is projected that 12,000 or more additional babies will be aborted every year," the blog at Illinois Right to Life reads. That number is an exaggeration, but the rhetoric is yet another reminder that the religious right has no problem weaponizing women's poverty in order to force childbirth on them.

The ban on federal funds for abortion has been in place since 1976, when the Hyde Amendment was first passed. Illinois now becomes the 17th state to set a policy allowing Medicaid funds to cover abortion services. The impact of these laws has been devastating for the thousands of women that are affected every year.

"I see, on a regular basis, women who are in need of an abortion and have difficulty affording it on their own," Dr. Jonah Fleisher of the University of Illinois Hospital in Chicago and a fellow with Physicians for Reproductive Health, told Salon. "For a lot of women it can be difficult to make the decision about whether they want to end their pregnancy. To add stresses about whether or not they will be able to do that versus the cost of continuing a pregnancy, it certainly doesn’t help."

In a 2016 analysis of the Hyde Amendment, Guttmacher Institute researcher Heather Boonstra found that 60 percent of women on Medicaid do not have abortion coverage. About one-quarter of the women who are denied coverage are forced to give birth when they don't want to. Some of those who don't give birth undoubtedly seek abortions on the black market, where pills to induce abortion are often sold at rates far below what a visit to a licensed medical practitioner would cost. Many others move heaven and earth to get the necessary funds together.

"To afford an abortion, many low-income women without coverage for the procedure delay or forgo paying utility bills or rent, or buying food for themselves and their children," Boonstra writes. Others may "rely on family members for financial help, receive financial assistance from clinics or sell their personal belongings."

Not having funding "can lead to delays in accessing that service," Fleisher noted. "It’s kind of a vicious circle. As you get delayed, it begins to cost more, and you have to spend more time collecting resources and marshaling resources to be able to access that service."

The struggle over abortion funding reflects the larger battle over health care in the United States. The percentage of Americans who agree that the government should ensure health care access for all has risen to 60 percent. The fact that Republicans lied repeatedly and egregiously about the impact of their various efforts to repeal the Affordable Care Act reflects this new reality. Coming right out and saying that health care access should be a privilege for the well-off instead of a right for all -- which has long been the orthodox Republican position -- has become politically toxic.

Rauner's signature on the Illinois bill, and his subsequent remarks, reflect how this national shift on health care is affecting the abortion debate. Whether or not one approves of legal abortion, it's hard to argue that there's any fairness in a system where better-off women are permitted to decline childbirth at will while low income women are forced to give birth.

Polling data reflects this shift. A 2015 survey found that a whopping 86 percent of voters agreed with the statement: "However we feel about abortion, politicians should not be allowed to deny a woman’s health coverage because she is poor."

Political attitudes have been changing, as well. Rauner may be the most startling example, as a Republican governor in a blue state, but he's part of a larger trend. Most Democrats, especially on the national level, simply accepted the Hyde Amendment as the status quo. That changed during the 2016 presidential campaign, when Hillary Clinton made restoring federal funding for abortion a major part of her platform.

This shift is also reflected in the Bernie Sanders-led push for a single-payer health care bill. The Medicare-for-All bill Sanders recently introduced, co-sponsored by many other Democratic senators, including Kamala Harris, Elizabeth Warren and Kirsten Gillibrand, has a repeal of the Hyde Amendment tucked neatly inside. Under this bill, abortion services would be covered for all women, in full and with no co-pay.

Sanders followed up Clinton's commitment to a repeal of the Hyde Amendment during the campaign, and he has kept the issue of abortion rights at the forefront of his advocacy for universal health care.

Unfortunately, the current version of the ACA doesn't do much to expand abortion access — insurance companies aren't required to cover it and the federal government still won't fund it through Medicaid or any other federal insurance program. But this newly invigorated discussion around the issue raises legitimate hope that next time Democrats are in power, any health care reform they undertake will make abortion easier for women to afford. There are nearly a million abortions in the country a year. It's a common, normal and safe medical procedure, no matter how much anti-choice forces want to pretend otherwise.

“Each of us should be able to make decisions about pregnancy and parenting that are best for our families," Fleisher argued. For the first time in decades, that stance is starting to look like it could become a political reality.