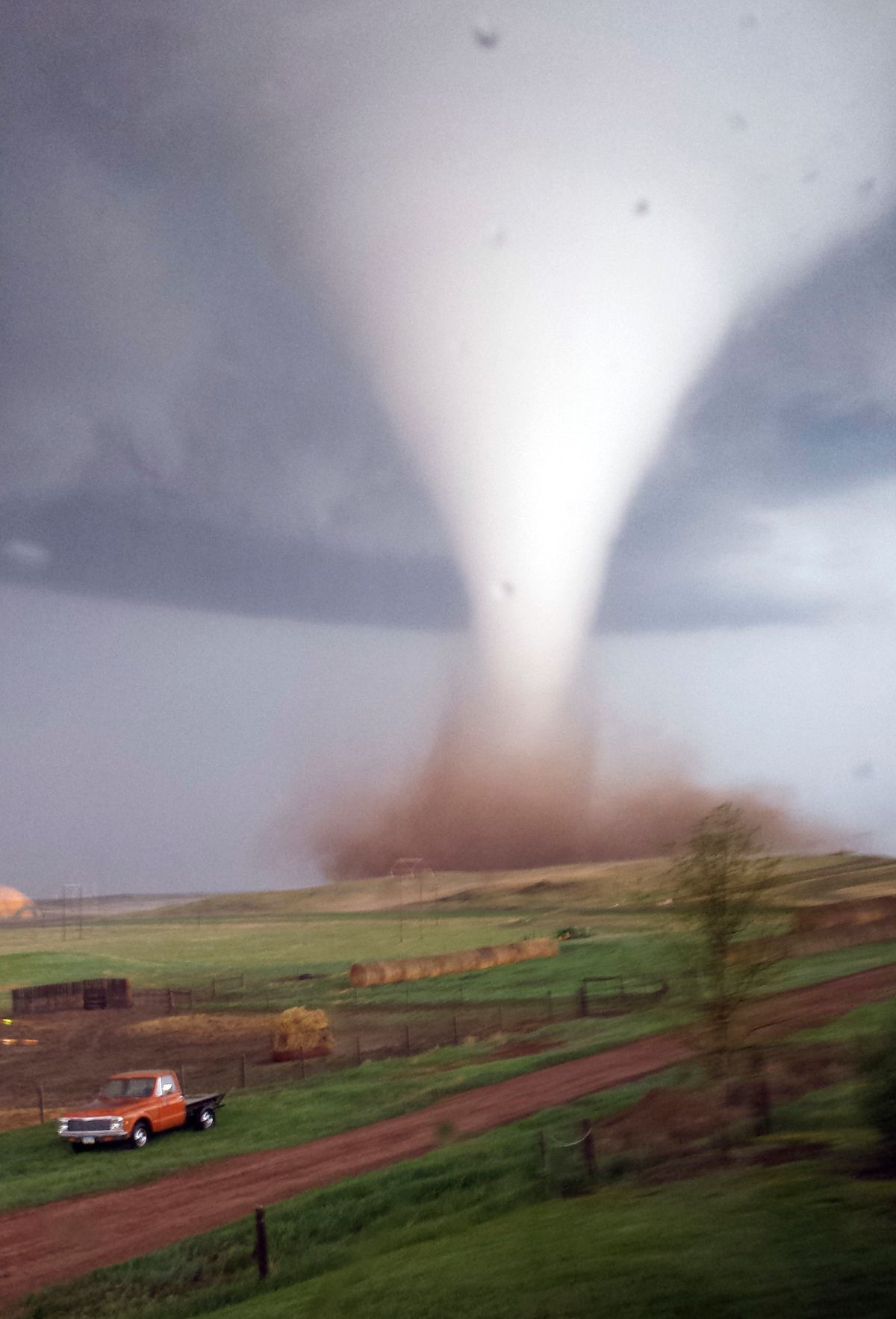 This photo taken on Monday, May 26, 2014 and provided by Jill Helmuth, shows a tornado touching down on a reach before heading towards Watford City, N.D. Authorities say several were injured and more than a dozen trailers were damaged or destroyed Monday evening when the twister tore through a camp where oil field workers stay. (AP Photo/Jill Helmuth) (AP)
--

What do Americans really fear? Are their fears exaggerated compared to their real lives? Do fears vary with gender?

It turns out, according to a fascinating national survey by Casino.org, The Odds of Being Afraid: What Do 1,000 Americans Fear Most, that people—with slight gender variations—fear sudden changes with potentially dire consequences the most. This starts with cancer and other deadly diseases, then turns to violent incidents from car crashes to other mayhem, and then societal breakdowns, such as losing access to clean water.

“Odds aside, the No. 1 fear among Americans were developing cancer, which averaged a score of 4.8,” reported Casino.org, which asked respondents to rate dozens of fears on a one-to-seven scale (with seven being most dire). “The subsequent top two fears included getting in a car accident (4.6) and developing heart disease (4.3).”

These most-cited fears were followed by, in descending order: having a stroke, being a victim of identity theft, experiencing nuclear war, being murdered, being shot, being in a plane crash, drowning, colliding with a deer while driving, being a victim of terrorism, getting food poisoning, being bitten by a venomous snake, not having access to clean water, becoming deathly ill from the flu, being bitten by a dog, losing one's job to an automated system, being bitten by a shark, experiencing an allergic reaction to a new food, being killed by law enforcement, dying in an elevator, being struck by lightning, experiencing complications during childbirth, being in a skydiving accident, being seriously injured by fireworks, being crushed by furniture, and an increase in U.S. border patrol.

That’s quite a list. Needless to say, readers will surely cite other worries. But among that catalog of possible nightmares, there’s a counterpoint: the reality of what actually occurs and its prevalence, which Casino.org explored.

“As we’re interested in odds/probabilities, we were curious of people’s perceptions of fearful events as compared to the realistic chance of their happening,” Karina Tissnes, Casino.org project manager, said.

As you might expect, some fears are properly placed, while others are unduly paranoid.

“The top four fears regardless of gender were developing cancer, getting in a car accident, developing heart disease, and having a stroke. How do these fears stack up with reality?” they said. “According to the Centers for Disease Control and Prevention, heart disease is the No. 1 cause of death for men and women. In America, 1 in 4 deaths are attributed to it. Cancer is a substantiated fear, with almost half of men and a little over a third of women having some form of it during their lifetime.”

So a general fear of deadly illness is well founded, even if the particular fates are a bit jumbled. But then fears and reality start to diverge.

“Both men and women listed getting into a car accident as their second greatest fear (tied with heart disease for men),” Casino.org reported. “In reality, you are more likely to die from a stroke (which was listed as No. 4 for both genders). The odds of dying in a motor vehicle accident are 1 in 114, whereas stroke causes 1 in 20 deaths in the U.S.”

“In fact, women are more likely than men to experience a stroke because of longer life spans and reproductive factors,” they reported. “On the other hand, more men are killed in car accidents each year because they spend more time behind the wheel and are more likely to engage in risky driving behaviors.”

“Where did our participants disagree?” they continued. “Women rated nuclear war as their No. 5 top fear, whereas men said identity theft was among their biggest concerns. According to the U.S. Department of Justice, identity theft affects about a million more women than men each year.”

Misperceptions and misplaced fears is where the report gets really interesting.

“Facts aside, we all have reasons for why we choose to fear one thing over another,” they wrote. “For example, according to our survey, people are about equally afraid of dying in a plane crash as they are of being shot or murdered. The facts tell us that over 33,500 people are killed; with a firearm in the United States each year, while 271 people died worldwide in aircraft incidents in 2016. So what do Americans believe is the likelihood of facing the things that terrify them most?”

The study doesn’t explain why people have such a great fear of plane crashes, compared to being shot or murdered. A pop psychological explanation might begin with noting that air passengers have no control over the planes they fly in, while a sizeable percent of people think they’re in control of their daily lives and don’t expect gun violence.

On the opposite end of the spectrum, underrated fears, was food poisoning.

“The only scenario Americans feared less than its perceived likelihood was food poisoning,” they found. “On a scale of 1 to 7, with 7 being extremely fearful, food poisoning was only rated a 3.0, while the odds of it happening were rated a 3.5. While there are about 48 million cases of foodborne illnesses in the U.S. each year, approximately 3,000 people will perish after eating contaminated food.”

There were, of course, examples where the perception of fears matched their real-life occurrence. “The closest was being bit by a dog,” the report said. Going a bit deeper, Casino.org also noted where men and women expressed different fears.

Starting with cancer, “men felt it was less likely to occur (a 3.6 versus 4.3 for women) despite the fact that more men than women are likely to develop cancer,” they said. “The second largest discrepancy in what people feared the most versus what they expected to happen was associated with being murdered. Women reported a greater fear (3.9) of being slain than men (3.4) and had a greater expectation of it occurring. In reality overall, your chances of being a victim of gun violence are similar to that of a car accident in the United States. When broken down by gender, men die more often from firearms.”

The research also found stark fears can sometimes change behavior, which also differs with gender. “The majority of men said the fear of losing their job to automation forced them to change their behavior (69 percent), while the fear of experiencing complications during childbirth caused the majority of women (82 percent) to make behavioral changes,” they said.

When it comes to politics, “the most politically charged fears had to do with nuclear war, climate change, health care, freedom of speech and press, education, gun control, abortion, and LGBTQ rights,” they reported. “The top three fears were nuclear war (56 percent), climate change (56 percent), and a lack of health care coverage for pre-existing conditions (55 percent). Further, 24 percent of Americans feared LGBTQ rights regressing, and 28 percent feared anti-abortion legislation tightening.”

And Now to Political Fears

Where does this leave Americans and their fellow countrymen and women?

We seem to be a society whose instincts are not that far out of sync with each other, even if some fears are unduly paranoid. Sudden life changes, starting with personal health crises, and then risks associated with our lifestyles — starting with driving — prevail, even if more information fine-tunes the real-life order of threats (i.e., heart disease before cancer).

You might say, fine, but then how did America elect its current president?

“Unfortunately, health care isn’t the only thing troubling Americans,” Tissnes said. “The uncertainty surrounding the Trump administration has instilled fear in many Americans,” she continued citing the fears surrounding nuclear war and the climate crisis.

Intriguingly, new polling data suggest Americans weren’t exactly well enough informed by last November’s vote. But that too, is changing as the gap between perceptions and realities close — a gap Casino.org’s survey highlighted.

As the Washington Post’s Jennifer Ruben wrote Thursday about a new Quinnipiac University poll, the more real-life information about President Trump people have, the firmer their conclusions tend to be—with the exception of hardcore GOP partisans.

She writes, “Americans it turns out: Are not bamboozled by his [Trump’s] NFL and flag histrionics; do not think it’s all the media’s fault; know he is not making America great (stressed and anxious maybe, but not great); have figured out he’s botching most policy matters — and is a bad person to boot; and don’t buy into his race-baiting act.”

“Americans are neither brain-dead nor moral vagrants,” Rubin writes. “In voting for him many probably hated Hillary Clinton more, engaged in wishful thinking about Trump and/or figured incorrectly a rich guy and his friends must know how to do things. But they do not like him now, and that speaks very well of the American people.”

Rubin suggests that the more people know, the more reality-based they become. The survey by Casino.org also points in that direction, even if it shows that, people being people, many will have outsized fears and misplaced beliefs. But it’s reassuring that information and facts can still matter greatly, from personal health to politics.