Honor the victims of Las Vegas by taking on the NRA

Keep your thoughts and prayers. And remember that talk is cheap 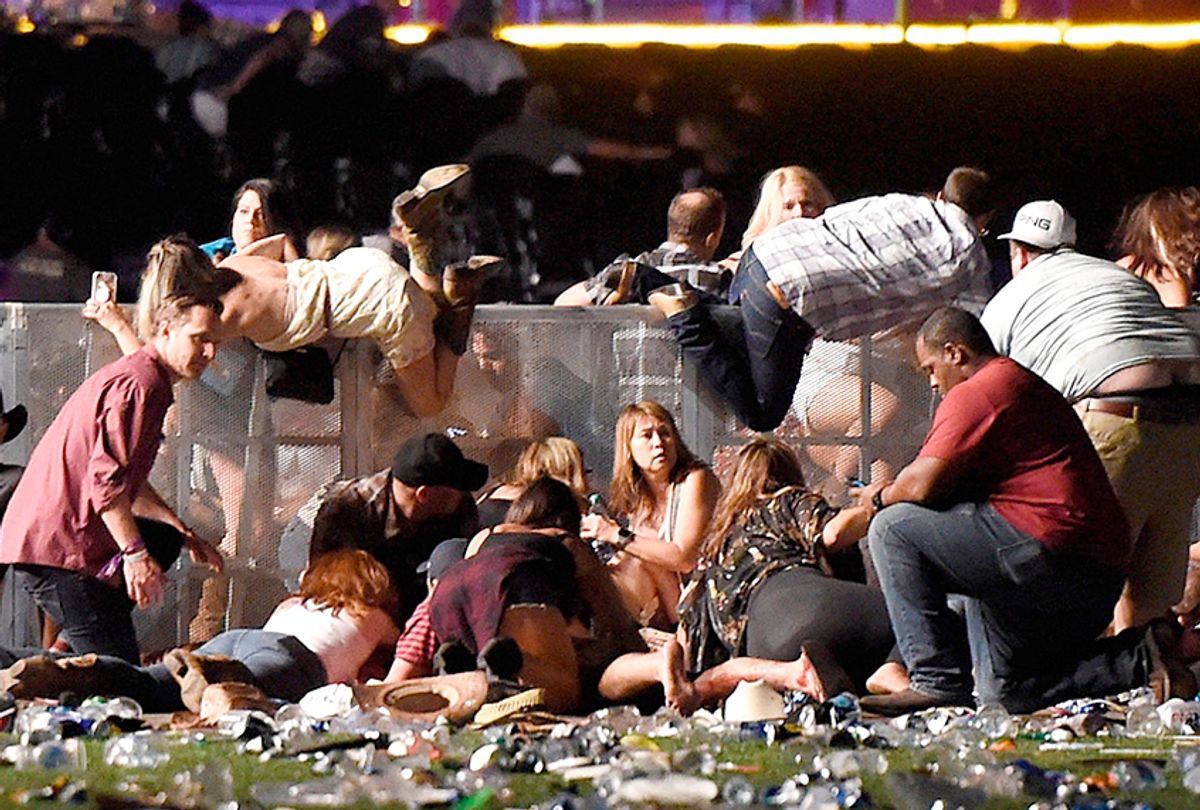 People scramble for shelter after gunfire at a country music festival on October 1, 2017. (Getty/David Becker)
--

On Sunday night, a gunman in Vegas opened fire on a country music festival in Las Vegas, killing at least 58 people and injuring more than 515 others. In response, President Donald Trump addressed the nation saying, "In times such as these I know we are searching for some kind of meaning in the chaos, some kind of light in the darkness. The answers do not come easy. But we can take solace knowing that even the darkest space can be brightened by a single light, and even the most terrible despair can be illuminated by a single ray of hope."

The statement was kind of poetic from a monosyllabic guy who is usually the exact opposite. I’d never question Trump’s ability to empathize, even after his harsh Puerto Rico comments. But his message was off. We don’t need poems right now; we need action.

Paul Ryan also released a tweet that was just as, if not more, ineffective as the statement from the White House.

“America woke up to heartbreaking news from Las Vegas. We stand united in our shock, our condolences, & our prayers.”

America woke up to heartbreaking news from Las Vegas. We stand united in our shock, our condolences, & our prayers. https://t.co/dKqjJqPIpu pic.twitter.com/B67cklsBkS

Poetic statements, tweets and prayers are not going to solve any problems. There are too many people on Capitol Hill and around the White House too scared to take a firm stance against senseless gun violence, introduce policy or do anything more than run their mouths. When will they wake up? When will they stand up to the biggest impediment to tougher gun laws in this country: The National Rifle Association?

And exactly where is the NRA anyway?

For an organization that says it wants guns everywhere, an event like this results in little pushback.

Whenever these mass shootings occur, the gun lobby doesn't do anything of substance. There are the empty statements omitting their role in the tragedies and ignoring that the victims died at the hands of that which the NRA loves so much: the guns purchased at the shows they promoted, showcased on their social media and celebrated as a part of their culture.

But then, the NRA gets defensive when someone talks about tougher gun laws, telling people to not be so hasty, while using the same tired arguments about hunting and protecting their families. To them I ask: What are your families doing that's so extreme you need guns for protection, especially if you live in the middle of America? Hunters and recreational shooters don’t need semi-automatic weapons. Gun owners who ignore these horrific events are a part of the problem.

Yes, I do understand that all gun owners aren’t participating in mass shootings, but too many are happening. According to the Gun Violence Archive, there have already been over 270 mass shootings in America this year. (The site defines mass shooting as four or more individuals being shot or killed at the same general time and location.) It's way too easy to shoot someone these days.

Here's where the NRA's favorite talking point falls short: Even if everyone were armed at the festival, this shooting could not have been prevented, because no one knew where the bullets were coming from.

Trump and Ryan — and every other politician who refuses to challenge the NRA and gun culture in general — will forever have blood on their hands for not trying to stop the NRA.

They can keep their prayers and well wishes to themselves, because that won’t bring back any of the people we lost.