Rebels with a romantic streak lose Tom Petty, dead at 66

A charismatic stage presence born of quiet confidence, Petty stepped out of the spotlight a week before his death 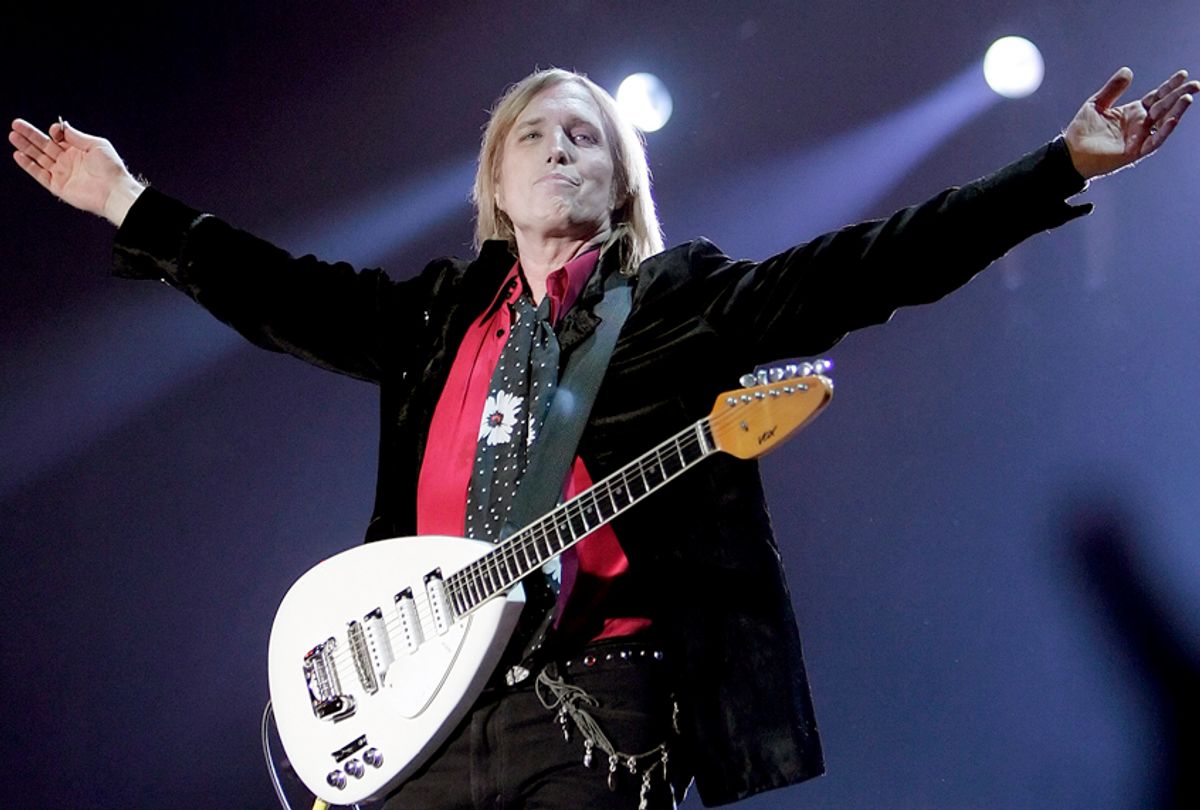 When news of Tom Petty's cardiac arrest reverberated around Twitter on Monday afternoon, a friend tweeted "I'm surprised how hard the Tom Petty news is hitting me." I felt exactly the same way, perhaps because his sudden illness — and, later in the evening, the announcement of his death — was so shocking and unexpected. In fact, the 66-year-old had wrapped up a 40th anniversary tour with his band the Heartbreakers only a week before, with three sold-out concerts at the Hollywood Bowl. I saw the tour myself back in June and left the energized show feeling grateful that the group was still so fired up to play together.

But everything about Petty was reliable. His speaking voice, an imitable, nasally Southern twang with a faint hint of laid-back California beach denizen. His jammy and uplifting live shows with the Heartbreakers, which were a near-yearly tradition. An unflappable stage demeanor driven by low-key charisma and self-confidence. Even the styling of his straw-colored hair barely wavered over the years, save for some occasional, era-appropriate updates.

Yet in Petty's case, being steadfast didn't equate to stagnancy. For him, consistency came in the form of meticulous songcraft. "After you've written 300, 400 [songs], you've got to really concentrate so you can get something that feels fresh and is worth the money to someone who has a whole bunch of Tom Petty records," he told the Los Angeles Times' Randall Roberts in 2014. "'Why would I buy another one?' Well, because it's worth it, you know?"

That attention to detail paid off: Despite its classic lineage, Petty's brand of rock 'n' roll somehow always felt fresh — the equivalent of a blank first page of a new notebook. He was both classic rock and new wave, a student of musical history with a voracious appetite for what was coming next. Southern rock, psychedelic pop, jangle rock, stoner-folk, bluesy soul, '50s rock 'n' roll — the Heartbreakers soaked up all these influences and cooked up a melodic, barnstorming ruckus.

Even "Southern Accents," a thoroughly '80s record with slicker production from Eurythmics' Dave Stewart, has enduring Petty brilliance — including the psychedelic-tweaked, Stewart co-write "Don't Come Around Here No More" and the misty-eyed romantic nostalgia of "The Best of Everything," which features members of the Band.

"Tom bridged the '60s generation and those that came after with cool and grace," the Waterboys' Mike Scott shared with Salon. "He was an important link, reminding us that music is music, whatever wave it comes from. He broke in the era of the Sex Pistols yet formed a band with Dylan and Roy Orbison. He fused the best of both eras in his own musi, and leaves us with a memory of singularity and greatness, a tall, blonde marker of righteous cool."

The benevolent tone of "The Best of Everything" hints at one very important part of Petty's appeal. Female characters in his songs, both solo and with the Heartbreakers, possess strength and agency. The "she" in the barnstorming "A One Story Town" follows her ambitions — "She had a far away feeling / Wasn't part of me" — while the titular "girl" in "Here Comes My Girl" has a vocal opinion about her future with her man: "And then she looks me in the eye and says, 'We're gonna last forever.'" The woman mentioned in "Listen To Her Heart," meanwhile, isn't swayed by a flashy rich dude, because she's level-headed and self-assured: "She's going to listen to her heart/ It's going to tell her what to do."

These women are also valued — for example, Petty was "waiting" specifically for the lady in "Rockin' Around (With You)" to arrive: "You came through/ You knew no one else will do." And when his male characters do screw up, they're suitably chastened by their actions. Witness the first verse of "Free Fallin'," where the protagonist calls himself a "bad boy" for breaking the heart of a "good girl" who clearly didn't deserve the heartache, or the fed-up woman of "Rebels" who pays her drunk man's tickets but then leaves him "out in the thicket."

Of course, the quintessential Petty woman is found in "American Girl." She's a dreamer who strives for great things because she's been "raised on promises" that are now coming due. Speaking to The Los Angeles Times in 2002, Petty called "American Girl" "the start of writing about people who are longing for something else in life, something better than they have. . . . In my mind, the girl was looking for the strength to move on — and she found it." Two decades before, Petty told City Limits' Cynthia Rose that he's "always felt sympathetic towards" the song's character, and that she "is just one example of this character I write about a lot — the small-town kid who knows there's more out there for them but gets fucked up trying to find it."

But Petty's music more often than not preaches resilience in the face of insurmountable obstacles. This strength was evident in his song titles — "I Won't Back Down," "You Got Lucky," "Don't Fade On Me" — and even more prominent throughout song lyrics. "I'm learning to fly/But I ain't got wings," he sings on "Learning to Fly," a song about embracing the unknown, albeit with a pragmatic touch ("But what goes up must come down"). The classic "Refugee" declares, "Everybody has to fight to be free," leading into the fist-pumping chorus, while "Runnin' Down a Dream" is optimistic about what's around the corner: "There's something good waitin' down this road/I'm pickin' up whatever's mine."

Petty's songs always have your back and nudge you forward, reminding you that around the corner — or with another flip through the calendar — life could change for the better. Even early on, he took this glass-half-full outlook. "I've been through things where I thought it just couldn't get no bleaker," he told Rolling Stone's Mikal Gilmore, after the release of "Damn The Torpedoes." "It was a bad stretch, but I had to bring myself out of it. If you can't take the attitude that even losers get lucky, I don't see how you can face life. I figure you either lose your girl or your job — sometimes both. But why let anyone know they've beat you?"

Petty projected so much strength because of his musical gang, the Heartbreakers, the greatest confab of bar band virtuosos ever assembled. The core of the group — freewheeling guitar genius Mike Campbell, tenacious pianist/keyboardist wizard Benmont Tench, and steely bassist Ron Blair — has been playing together for well over 40 years. (Drummer Steve Ferrone joined the band in 1994, after relations with original drummer Stan Lynch irrevocably fractured.)

During Petty's 40th anniversary tour, he shared variations of the band's origin story with gusto, as if he was passing down treasured lore to the next generation. Their chemistry and intuitive communication is a thing of indescribable wonder. "About 20 years ago, we stopped doing soundchecks," Petty told Rolling Stone earlier in the year. "It eats up the whole day and we'd argue, and then you'd come back and the sound would be completely different with a crowd."

What's impressive is that Petty — and the Heartbreakers, because their mythologies are inextricably intertwined — never stopped evolving. That was no more evident than how easily Petty sailed into the '90s, in a way few classic rockers did. (Only Neil Young, Aerosmith and Petty's pal Dylan — and, to a lesser extent, Bruce Springsteen and Eric Clapton — adapted to the post-Nirvana rock world so seamlessly.) The success of 1989's "Full Moon Fever" and its instant-classic singles "I Won't Back Down," "Runnin' Down a Dream" and "Free Fallin'" led straight to the Heartbreakers' 1991 record "Into The Great Wide Open," home of the lilting "Learning To Fly."

The band's fabled 1993 "Greatest Hits" CD juggernaut spawned another massive hit with the stoner anthem "Mary Jane's Last Dance." Even 1996's "Songs and Music from 'She's the One'" is considered an underrated fan-favorite. But Petty peaked once again with the 1994 solo album "Wildflowers," an introspective and mature masterpiece that crystallized his reputation as a poet laureate of the human condition — whether via the hotrodding "You Wreck Me" and smoldering roadhouse blues rocker "Honey Bee," or with the delicate "Crawling Back To You" and the orchestral "Wake Up Time."

Conventional wisdom says artists aren't supposed to make masterpieces two-decades-plus years into a career. But Petty never let himself become a relic of any particular era, genre or historical epoch. In yet another act of defiance, he kept evolving. A Heartbreakers tour setlist often changed from year to year, leaving out even hits and fan favorites. As a songwriter, Petty became increasingly interested in blues music, which led to the Heartbreakers' 2010 record "Mojo." In the last decade, he reconvened the pre-Heartbreakers band Mudcrutch (which also features Campbell and Tench) for two stellar albums and the band's first-ever tour.

Petty the human being also kept up with the times. In 2015, he expressed deep regrets about the band using the Confederate flag during the "Southern Accents" tour. "The Confederate flag became part of the marketing for the tour," he told Rolling Stone. "I wish I had given it more thought. It was a downright stupid thing to do." And in late 2016, within a piece previewing this year's epic tour, he spoke to Rolling Stone about his shifting personal priorities.

"I'm thinking it may be the last trip around the country," Petty said. "It's very likely we'll keep playing, but will we take on 50 shows in one tour? I don't think so. I'd be lying if I didn't say I was thinking this might be the last big one. We're all on the backside of our sixties. I have a granddaughter now I'd like to see as much as I can. I don't want to spend my life on the road."

That willingness to be vulnerable more than anything made Petty one of the most relatable rock gods. "It's like Uncle Tom died," a friend responded to the news of his death, and the comparison felt apt. For multiple generations, Petty's music was the comforting soundtrack for major life events, both triumphs (first dances, first romances) and low points (heartbreaks, death, loss).

It's still difficult to grasp that there will be no future Heartbreakers tours or Petty live concerts; it was widely hoped he would do a smaller-venue tour to commemorate "Wildflowers." Rebels with a romantic streak lost their ringleader on Monday night, and the world is a much less vibrant place.