Al Franken in conversation with Salon: Fighting Trump "has been easier than we thought" 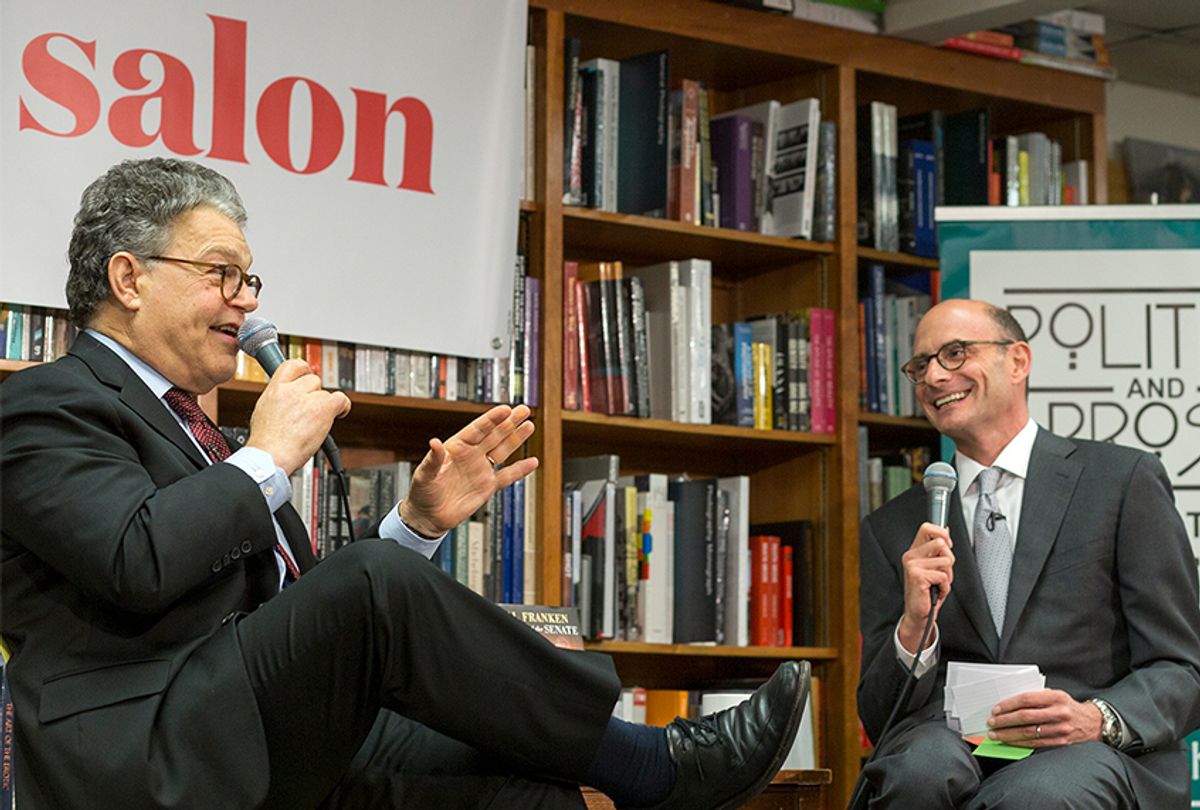 Republicans may control Congress and the White House, but legislatively they don't have much to show for it. Minnesota Senator Al Franken finds that hilarious. "I thought they would have thought of something," Franken said with a laugh to Salon Media Group CEO Jordan Hoffner. The two spoke on a special Washington edition of "Salon Talks," Salon's daily interview series that streams live here on Salon, Facebook and Periscope.

During their conversation, Franken addressed how Democrats in the Senate have changed their strategy under Republican leadership. "Our legislative agenda became fighting them. We're successful mainly because they just didn't think of anything that's anything but terrible." The live audience at Politics and Prose erupted in laughter.

The senator spoke about his memoir "Al Franken: Giant of the Senate," released this past spring, which chronicles his journey from "Saturday Night Live" comedy star to winning the tightest race in Congressional election history, which included an unprecedented eight-month recount saga.

"Now that you have the job, is it everything you thought it would be?" Hoffner asked Franken.

"I think I thought that there would be more debate," Franken said. "Most of the time you give a speech on the floor, you're talking to nobody."

Franken said he wishes there was more room for back and forth debate on issues and more of a spirit of bipartisanship. "The Senate is supposedly the most deliberative body in the world . . . sometimes the Senate kitchen is more deliberative," he joked.

Throughout the evening, Franken drew laughs on his animosity for Texas Senator Ted Cruz, his experience hunting pheasant in an attempt to understand gun culture in his home state, and his thoughts on which senators he'd go to a Grateful Dead concert with.

On a somber note, he spoke out about the mass shooting in Las Vegas. "This was unbelievably horrific," Franken said, but in the same breath acknowledged the harsh reality Congress faces in trying to pass gun-control legislation. "We have to get rid of assault weapons, and we won't be able to."

Franken also expressed his disdain for Trump's foreign policy leadership. "Some of the more upsetting moments of this presidency have been his remarks regarding North Korea," he said. "I think there's been a zero percent chance of a nuclear exchange with North Korea until this president, and now I think there's a one percent chance or less. The worst thing you want is just some misunderstanding, some miscalculation by somebody."

Watch the full conversation above to hear Franken talk about tax reform, health care, a sustainable energy solution for Puerto Rico and the Republican senator he finds most funny.