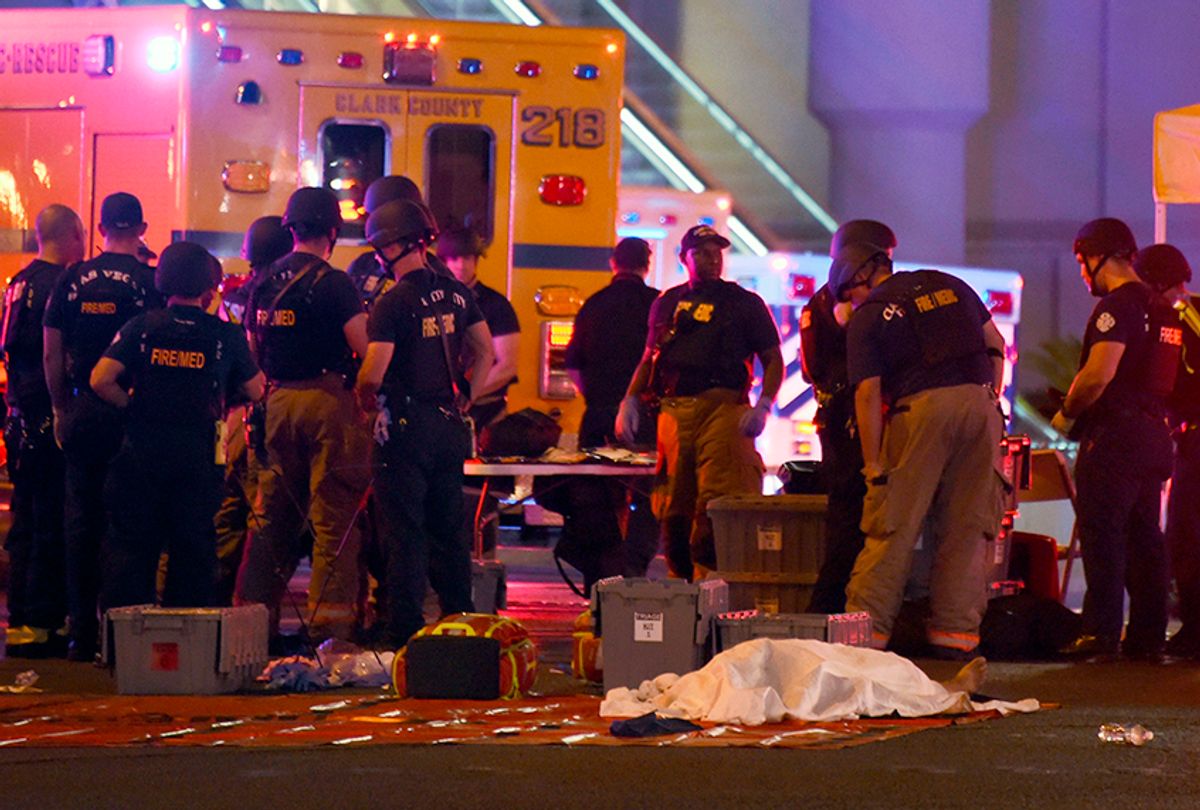 Fire and rescue personnel gather after a mass shooting at a country music festival on October 1, 2017 in Las Vegas, Nevada. (Getty/Ethan Miller)
--

Fox Business host Kennedy believes that the "screeching" gun control debate in the U.S. "never centers on intent, or mental illness, or the actual causes of horrific tragedies" and made an inaccurate false equivalency by adding that if the Las Vegas shooter had instead used a truck to mow people down, the public wouldn't be calling for "truck control."

On Tuesday night, the Fox host railed against the gun control debate, despite the fact that there is more of a lack of discourse surrounding gun violence in the country as opposed to an excess of one.

.@KennedyNation: "If that psychopath had...driven a truck into that crowd and killed 100 people would we be talking about truck control?" pic.twitter.com/3K00LJDScK

She added: "If that psychopath had God forbid driven a truck into that crowd and killed 100 people would we be talking about truck control? Or how trucks cause people to commit unimaginable acts of violence? No. But using logic in an emotional argument is a no-win in this climate, and don't expect gun control nuts to employ reason and facts anytime soon."

"What remains to be seen," she chastised, "is how this president navigates the tragedy in Las Vegas to elevate this conversation beyond talking points and really figure out what caused an unstable coward to snap and kill so easily."

But vehicles are more heavily regulated in America than guns are. All drivers must obtain a government issued driver's license, which means there is a national database; they must also own and be able to show proof of car insurance. Vehicles themselves require regular inspection approval. They must pass safety regulations when manufactured. The average person can't walk into a car dealership without proper documentation and leave with a vehicle in their possession that same day.

Why is there no notification if someone is buying multiple rifles? "There's no federal law requiring that" -- Jill Snyder, ATF Special Agent pic.twitter.com/3b9hRtcs4E — CBS This Morning (@CBSThisMorning) October 4, 2017

Until the Las Vegas shooter opened fire on thousands of people at a crowded festival, everything he did prior to his murder of 59 people was perfectly legal.