A member of an advocacy group donned a top hat, mustache and monocle as Richard Smith spoke 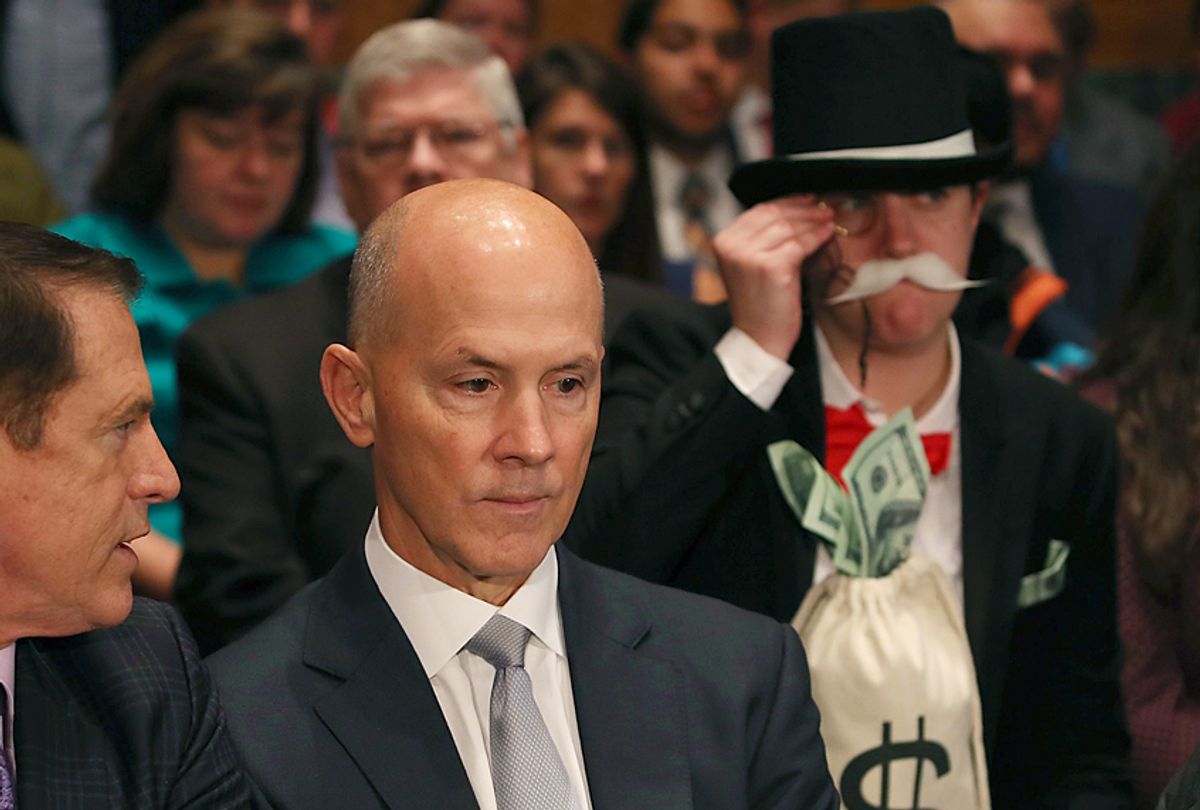 Amanda Werner, a campaign manager for the Public Citizen and Americans for Financial Reform advocacy groups, sat behind Equifax CEO Richard Smith during his Senate testimony Wednesday morning wearing a top hat, fake mustache and monocle in a rough approximation of Rich Uncle Pennybags from the Hasbro board game, Monopoly. Werner is your new best friend.

As Smith attempted to explain to the Senate Banking Committee how his company let the Social Security numbers and birthdates of 145.5 million Americans leak out all over the internet, Werner looked on, sometimes twirling that white mustache, sometimes peering inquisitively through that monocle, always dancing into your heart.

Watch below and try to figure out where you two will have brunch this weekend.

Working with Public Citizen and Americans for Financial Reform, your new companion for life also distributed "Get Out Jail Free" cards — symbols "of how forced arbitration grants virtual immunity to financial institutions" — to those attending the Banking Committee's Wells Fargo hearing on Tuesday, as well as to the offices of all 100 senators.

As Werner said in a statement, "Make no mistake: Arbitration is a rigged game, one that the bank nearly always wins." She added, "Shockingly, the average consumer forced to arbitrate with Wells Fargo was ordered to pay the bank nearly $11,000. Bank lobbyists and their allies in Congress are trying to overturn the [Consumer Financial Protection Bureau’s] rule so they can continue to rip off consumers with impunity."

As the organization notes on a website dedicated to overturning the Congressional Review Act — legislation that allows the government to stall or remove consumer-protection regulations applying to loans and other banking transactions:

Forced arbitration clauses buried in the fine print of take-it-or-leave-it contracts may be the single most important tool that predatory banks, payday lenders, credit card companies and other financial institutions have used to escape accountability for cheating and defrauding consumers. These clauses push disputes into secretive arbitration proceedings rigged to favor financial companies and conceal wrongdoing from regulatory authorities. The average consumer forced into arbitration ends up paying more than $7,700 to the bank or lender, according to the Economic Policy Institute.

It's a pernicious system, and fighting it is a worthy cause for your recently acquired lifelong pal. Let's hear more from Werner, shall we?