Outside observers are amazed to see such chaos and violence in a stable, modern democracy. But Spain isn't one 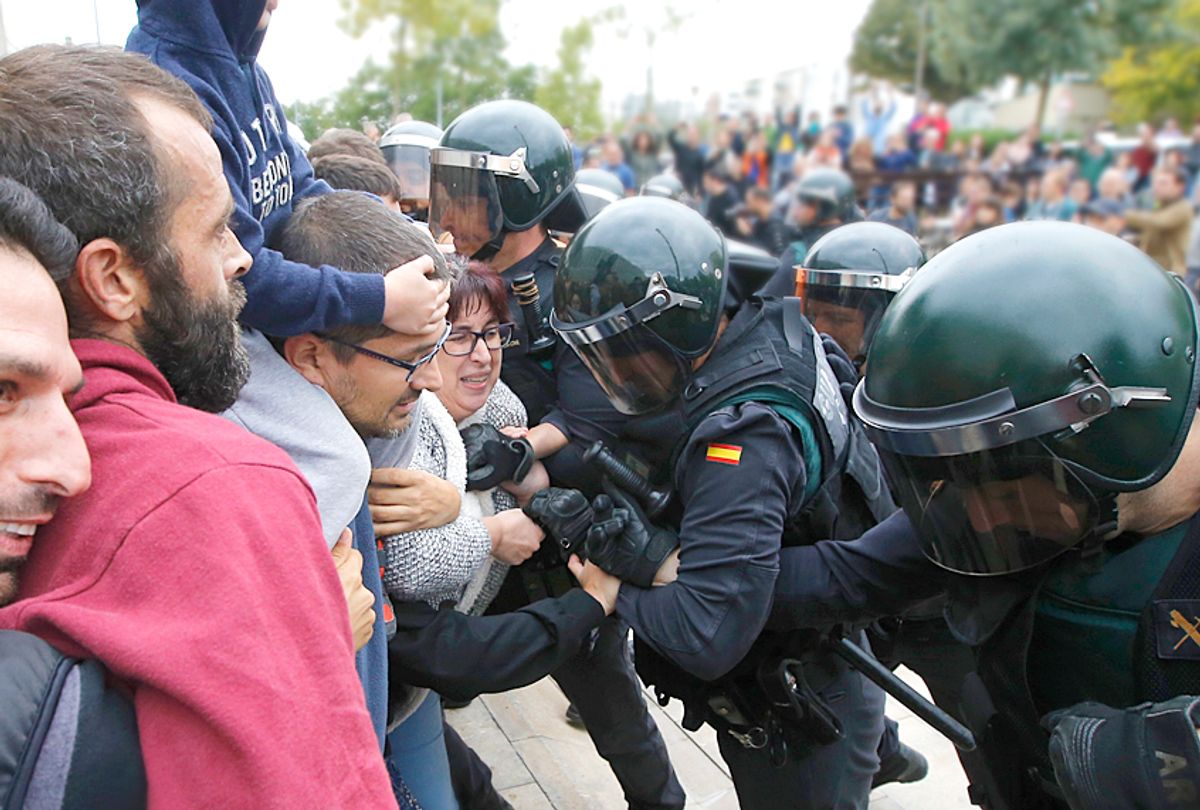 For people in Catalonia, and Catalan people around the world, it's impossible to shake the image of a police officer grabbing a woman by the hair and throwing her downstairs, then using his baton to strike an elderly lady who is raising her hands in the air in a sign of peaceful protest. Or the image of riot police stomping on people of all ages who are sitting on the floor, hitting them and shoving them aside, breaking their bones even after they’ve moved out of their way. It is hard to reconcile those images of the nearly 900 Catalan citizens injured in recent protests, with the idea that Spain is a modern, robust democracy, as people in other Western nations apparently consider it.

Last Sunday, millions of people showed up to vote in a referendum on independence for Catalonia, a region of northeastern Spain with its own language and a long and distinctive cultural tradition. The central government in Madrid viewed the referendum as illegal, and thousands of Spanish riot police moved in to shut it down, in many cases attacking and physically abusing potential voters.

Deputy Prime Minister Soraya Saénz de Santamaría insisted that police were only after the ballots, not the voters. Other government officials have denied that any such violence ever happened at all. In an unusual address to the nation, King Felipe VI (who holds no political power) said nothing about the strife, which the entire world had seen on television or the internet. Prime Minister Mariano Rajoy went on to say that Spain had been “an example for the world” in imposing the rule of law and safeguarding its citizens’ freedoms.

Indeed, many analysts and news reporters have wondered how something like this could be happening in a “strong, European democracy” like Spain, as one CNN news anchor put it. In an op-ed for The New York Times, Roger Cohen argued that "on a fundamental point, Rajoy was right: the referendum was illegitimate, having been suspended by Spain’s constitutional court.” That would indeed be a fair point, if it didn’t represent a total misunderstanding of Spanish history and its current political structure.

But how did we get to this referendum in the first place? Some would track Catalan sovereignty aspirations back for centuries -- perhaps to 1714, when the Spanish king at the time got rid of Catalonia's political institutions -- but last Sunday’s referendum is the result of a process that started in 2010. That was when Spain's constitutional court shot down a significant portion of a new statute of autonomy for Catalonia. That statute had first been approved by the Catalan parliament, then redrafted by the Spanish central government under the Socialist Party (which was then in power) and was then approved in Catalonia by referendum.

After that court decision, more than a million people took to the streets in Barcelona and other Catalan cities and towns to protest. Every year since then, on Catalonia’s national holiday, millions of people have come out in peaceful demonstration to demand independence. Throughout that period, the semi-autonomous government of Catalonia continued to seek negotiations with the central government in Madrid, led since 2011 by Rajoy and his center-right People's Party. First the Catalan government proposed a broadening of autonomy and then a non-binding referendum on independence, in 2013. Both options were received the same way: with no willingness to listen, discuss or compromise in any way.

That led to snap elections in Catalonia two years ago, which were framed as a regional plebiscite: If the parties in favor of independence won the election, they would unilaterally make the region an independent nation. One interesting point here is that unlike many other nationalist movements in Europe, Catalan nationalism can’t be explained away as a right-wing phenomenon. Although the party that had been leading the movement until that point was identified as center-right, it then formed a unified front with the other main pro-independence party in the region, ERC, which is left-wing. A third pro-independence and left-leaning party, CUP, ran on its own. Together those parties took 72 of the 135 seats in the parliament, while another party, which favored holding a binding referendum on independence, won 11 more. That was the referendum Catalan authorities tried to hold last week, which by most estimates was supported by 70 to 80 percent of the population.

It's entirely reasonable for observers like Roger Cohen to wonder how this kind of political violence could occur in a modern strong, democracy. There’s an easy explanation — Spain isn’t one. Francisco Franco’s decades-long dictatorship (which systematically oppressed the Catalan region, its traditions, culture and language) ended in 1975, not because there was a revolution, but because the dictator finally died. His named successor, King Juan Carlos, decided to hold elections instead of continuing to rule undemocratically.

It's certainly true that we have come a long way since then. But it's also true that there are still streets and avenues in Spanish towns named after Franco. His corpse is interred in a national park that was built by enslaved prisoners of the civil war of the 1930s -- which brought Franco to power with the support of Hitler and Mussolini -- and until recently was maintained with public funds. Thousands of families still don't know what became of the bodies of loved ones who died during that war. In fact, Rajoy's governing People's Party is widely understood as the democratic continuation of Franquism. Spanish democracy was built on one essential condition: a concerted national amnesia about the dictatorship.

But don’t let that amnesia fool you. Our institutions are still far from those you might expect to find in a “strong, modern democracy.” To start with, the press in Spain is far from free: Last weekend, most non-Catalan TV networks didn’t show images of the police violence. Even more important, the constitutional court itself is hardly nonpartisan. Its president was, until recently, a leader of the People's Party and wrote a book portraying the Catalan people in derogatory and stereotypical ways. When it came time to rule on the legality of the referendum, the court adjusted its customarily lengthy deliberations to the political needs of the moment, making what looked to many like a snap decision.

Rajoy’s government has held onto this idea that the referendum was illegal as if it were an unchangeable law, entirely independent from partisan politics. In fact, the Spanish constitution was modified in 2011 to limit public debt, a bipartisan decision (something that almost never happens in Spain) that was supported by Rajoy and his party under pressure from European authorities. To say that the referendum was clearly illegal under stable and solid democratic norms, and that the police were simply maintaining the rule of law is whimsical at best -- and something much darker at worst.

It may be true that by pushing for a referendum under the adverse conditions of the moment, Catalan political leader Carles Puigdemont risked making a polarized situation worse. But to systematically ignore the voices of millions of Catalans who have been clamoring to be heard for years -- under the pretense of protecting “legality” -- was also not a solution.

What we know about the referendum's result is that about 42 percent of the Catalan population participated, and 90 percent of those who did, voted in favor of independence. That of course does not include ballots seized by the national police at dismantled polling places. It's impossible to know how the results would have turned out if people hadn’t been flooded with images of police officers violently and relentlessly attacking the population all day long. For some, that was surely motivation to go vote for independence (indeed there are several reported cases of anti-independence voters having a change of heart in view of the violence), while for others it was no doubt a deterrent.

What happens next? No one in Catalonia or Madrid or anywhere else knows for sure. Does illegitimate police violence warrant a confrontational act of secession that could spark more violence? For some it does: Puigdemont, the Catalan prime minister, has asked the parliament to declare independence, and it may do so as soon as next week. For others, the situation is more complicated, and they would no doubt have preferred to express their opinions in a lawful and peaceful manner. What is clear is that the ghost of Franco is alive and well in Spain, and the fractures this sadistic violence has created (or revealed) in Catalonia will be impossible to ignore and difficult to overcome.