Is the expansion of our nuclear arsenal in America's best interest, or is it just Trump's latest boastful display? 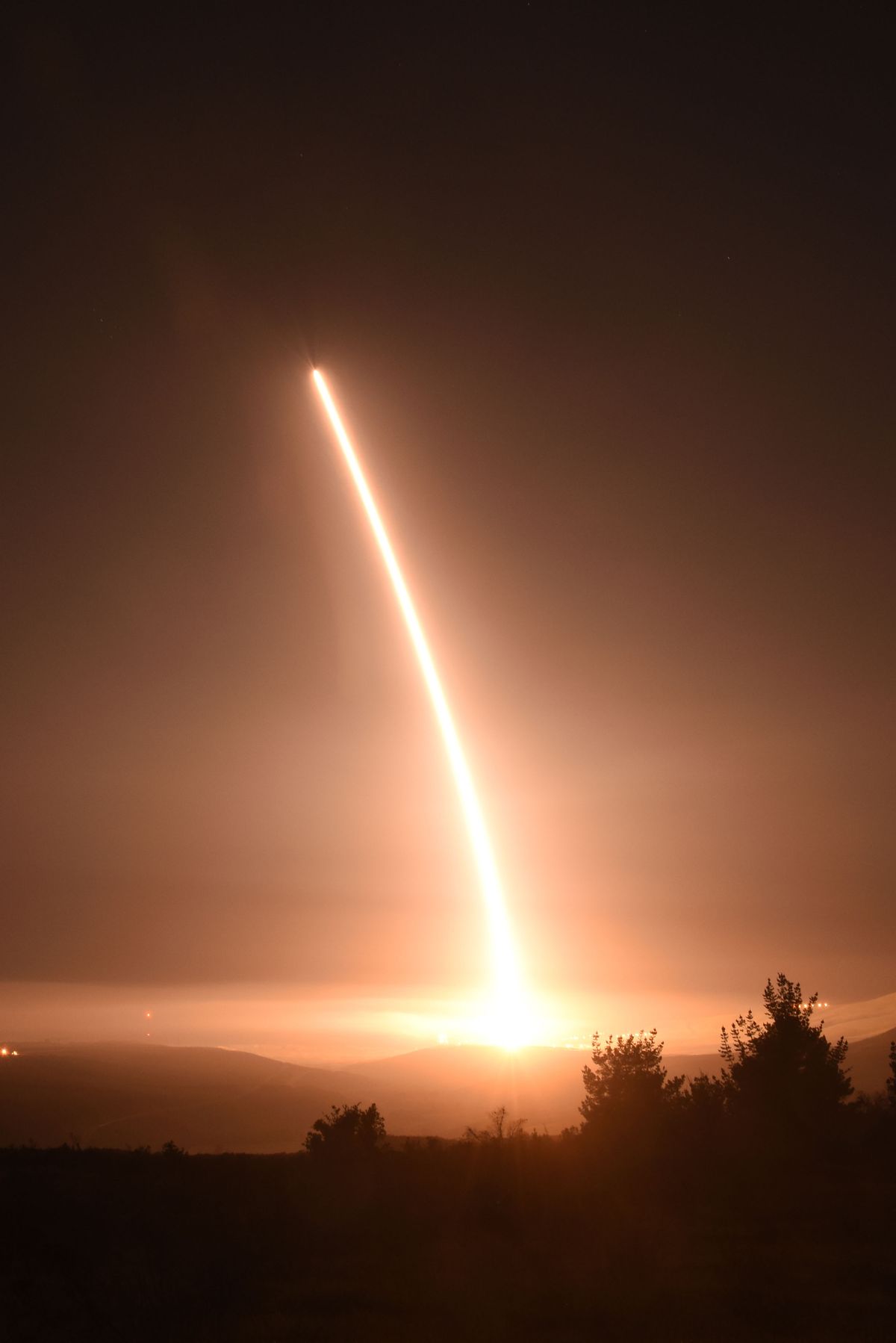 This Thursday, Feb. 25, 2016 photo provided by the U.S. Air Force shows an unarmed Minuteman 3 intercontinental ballistic missile launches during an operational test from Vandenberg Air Force Base, Calif. The unarmed missile roared out of its underground bunker on the California coastline and soared over the Pacific, inscribing the signature of American power amid growing worry about North Korea's pursuit of nuclear weapons capable of reaching U.S. soil.(Staff Sgt. Jim Araos/U.S. Air Force via AP) (AP)
--

An analysis by the Arms Control Association of U.S. government budget data projects the total cost over the next 30 years of the proposed nuclear modernization and maintenance at between $1.25 trillion and $1.46 trillion. This expenditure is not included in our defense budget of $700 billion, which leads the world in military spending and represents more than the spending of the next seven countries combined – three times what China spends and seven times what Russia spends on defense.

To put this into perspective, this number exceeds the combined total federal spending for education; training, employment, and social services; agriculture; natural resources and the environment; general science, space, and technology; community and regional development (including disaster relief); law enforcement; and energy production and regulation.

With climate change deemed by the Pentagon as an immediate national security threat, healthcare costs rising, and an increasing number of natural disasters, one might think nuclear weapons would lose their place as the top recipient of federal spending. But this is far from the case and there is a reason why.

As long as other countries continue to harbor nuclear weapons, we will do the same. And vise versa. As Donald Trump said at the start of his campaign, "If countries are going to have nukes, we’re going to be at the top of the pack."

This sentiment followed him into his presidency. The Trump administration just last week considered proposing additional, smaller, more tactical nuclear weapons that would cause less damage than traditional thermonuclear bombs. However, these mini-nukes are not some new, profound proposal. We have had nuclear weapons capable of being dialed down to the power of "mini nukes" since the 80's. The 15-kiloton bomb dropped on Hiroshima would now be classified as a "mini-nuke" yet its destruction was monumental. Adding more, smaller nukes is an unnecessary, potentially dangerous addition. Proponents of the proposal claim these "mini-nukes" would give military commanders more options; critics, however, contend that it will also make the use of atomic arms more likely. Christine Parthemore, International Affairs Fellow at the Council on Foreign Relations, says, "Our investments should be careful lowering our threshold of use." Further, the proposed addition will only add trouble to the already fraught international conversation opposing nuclear weapons.

As former Secretary of State George Shultz so eloquently put it, “proliferation begets proliferation.” One state’s nuclear acquisitions only drive its adversaries to follow suit. The reality is adding to our nuclear arsenal will only force our international opponents to defensively order a mad dash for the bomb.

In today's political arena, as Russia remains volatile and North Korea's threat grows, is funding the expansion of our nuclear arsenal in the country's best interest or just Trump's latest boastful display of American power?

This cold war era mindset relies on the relationship between acting and reacting. With the recognition that retaliation is likely, if not guaranteed, nuclear weapons are supposed to restrain the possibility of action on behalf of nuclear leaders. They are supposed to make them cautious, regardless of which states we are talking about or how many weapons they might possess.

According to a 2017 report by the Arms Control Association, The United States currently maintains an arsenal of about 1,650 strategic nuclear warheads deployed on Intercontinental Ballistic Missiles (ICBMs), Submarine-Launched Ballistic Missiles (SLBMs), and Strategic Bombers and some 180 tactical nuclear weapons at bomber bases in five European countries.

The ICBM is arguably the most controversial piece of America's nuclear triad, yet in August, the Air Force announced major new contracts for a revamp of the American nuclear force: $1.8 billion for initial development of a highly stealthy nuclear cruise missile, and nearly $700 million to begin replacing the 40-year-old Minuteman missiles in silos across the United States.

This plan was born from the Obama administration but enthusiastically hightailed by Trump. Obama's reasoning was that as our weapons became increasingly safe, their numbers could be reduced.

However, Trump's reasoning has proven to be different. His threat that North Korea will be met with "fury and fire" combined with his proposals of mini-nukes only propel the notion that he is not following past leaders in enforcing a no first strike policy.
Report Advertisement

The danger of revamping this shaky leg of the nuclear triad is in part due to Trump's demonstrated impulsiveness. As Andrew Weber explains, "There is a 2-3 minute threat of the land-based missiles and it is impossible for the target to determine whether the weapon has a nuclear or conventional tip." An impulsive president with nuclear codes capable of starting a nuclear war in 2-3 minutes using a weapon that must fly over Russia and has the possibility of mistaken identity, is essentially a recipe for disaster.

Christine Parthemore says the "ICBM is the weakest link" and we should begin reform by eliminating it. Yet, instead the current administration is both modernizing and adding to this arsenal, a move that will most likely draw other countries to do the same and commit the United States to keeping the most vulnerable branch of its “nuclear triad.”

The 2017 report by the Arm Control Association broke down the proposed spending for Submarine-Launched Ballistic Missiles (SLBMs) and found the total reached over $128 billion. The costly program, titled Colombia Class, includes 12 new boats for the Navy, and has a projected life-cycle cost of $282 billion. In comparison, free public education in America would cost a mere $62.6 billion dollars.

The third and final upgrade is a modernization of the current B-2 Bomber costing 9.5 billion. However, in accordance with Obama's efforts to decrease the US's quantity of weapons, known as START (Strategic Arms Reduction Treaty), the Pentagon announced it would retain 42 deployed and 4 non-deployed nuclear capable B-52 bombers. The remainder of the B-52 bombers would be converted to carry only conventional weapons.

In these last few weeks, as tensions rise to an unprecedented high with North Korea, it may seem like the wrong time to discuss the reduction and soon eradication of ICBM's. However, Joseph Cirincione, President of the Ploughshares Fund, says that how America chooses to go forward at this moment in time will have utmost consequences to the entire international political arena and its potential for nuclear war.

In the past weeks North Korea launched 22 missiles in 15 tests and sought to assure its dominance and Trump, in his expected fashion, took to Twitter to boast American power, a move that North Korean leaders took to mean war. With the threat of a nuclear war with North Korea actualizing, America should be discussing the potential of reigning in North Korea by moving away from nuclear weapons. As it is, Trump's egotistical rhetoric falls flat when up against Kim Jong-un, a ruthless tyrant willing to gamble with the lives of millions of his citizens. If the US were to strike first, there would no doubt be retaliation. Despite having spent hundreds of billions on strategic missile defenses, most analysts have little confidence that the US can destroy any intercontinental missiles launched against them once they get off the ground. After the most recent failed interceptor test Philip E. Coyle III, who previously ran the Pentagon’s weapons-testing program, stated that the system “is something the U.S. military, and the American people, cannot depend upon.” This is after spending $8 billion a year for the past forty years.

Ultimately, there is no military option that would not entail a mind-bogging gamble with the lives of millions of Americans, Japanese and especially South Koreans.

Our current policy of pugnacious rhetoric does little to affect Kim Jong-un. We have been tightening sanctions on North Korea for over a decade, and their nuclear program has only accelerated. A first-strike by America means the endangerment of millions. What this leaves is diplomacy. Negotiating with North Korea will not be easy but it is possible. The Clinton administration helped negotiate the important 1994 Agreed Framework, under which North Korea effectively froze its major nuclear programs.

Creating a deal with Iran through diplomatic relations appeared unreasonable until it happened.

Sanctions should remain in place but they must be paired with some diplomatic engagement. We must be open to offering North Korea things that they want: security guarantees, some form of international political recognition, and economic benefits in exchange for a freeze on their nuclear and missile programs. We must do all this while strengthening our relationship with South Korea and Japan and maintaining a strong foothold enclosing North Korea. None of this will be possible without the trust of the international community, a trust that is shaken with Trump's threat of ripping up Obama's 2015 Iran Deal.

We must also remember that China would rather see a nuclear North Korea than a larger United States presence in Asia. As of now, China facilitates about 90 percent of North Korea’s trade and provides its oil. And it is China that has opposed a stricter U.N. embargo for fear of a collapsed regime and a potential unified Korea allied with the United States. It is important now more than ever to isolate North Korea with the help of our allies.

Now is not the time to build up our nuclear arsenal and respond to threats with military action, especially as we face an already threatened North Korea. It is crucial now more than ever not to proliferate the use of nuclear weapons. The goal is to deter and when it comes to deterrence, more is not better, especially when it is so incredibly expensive.