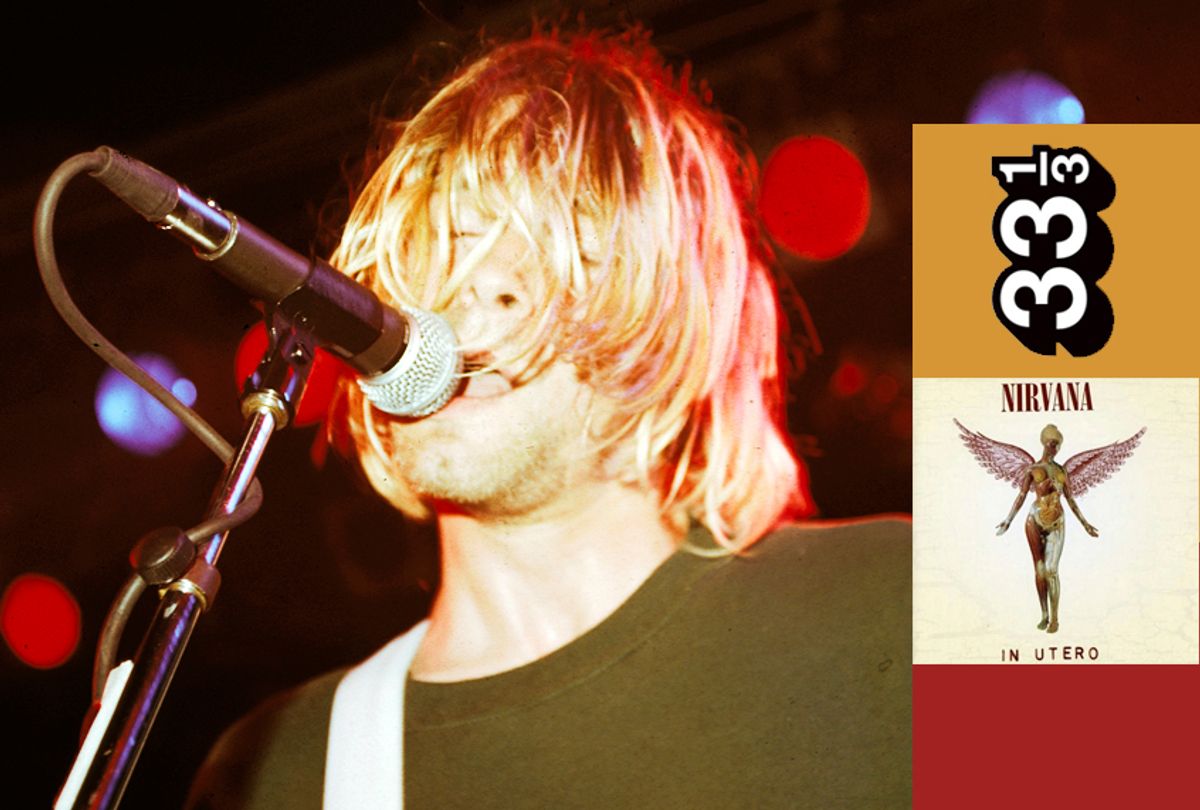 Excerpted from "Nirvana's In Utero" by Gillian G. Gaar (Bloomsbury, 2006). Reprinted with permission from Bloomsbury Publishing.

[Steve] Albini’s fee was a modest $100,000, and he refused to take any royalties (“Anyone who takes a royalty off a band’s record—other than someone who actually writes music or plays on the record—is a thief,” he told [writer Michael] Azerrad). They would also be recording at the same place Albini had recently finished working with PJ Harvey on "Rid of Me," Pachyderm Studios, located just outside the small town of Cannon Falls, 40 miles southeast of Minneapolis, Minnesota. It was felt that the remote location would cut down on outside distractions, and it was also inexpensive—recording costs were said to be a mere $24,000. Albini sent Cobain a copy of "Rid of Me" to give him an idea of what the studio sounded like.

Albini had also been sent a cassette by the group, of the songs they had worked on in Brazil. “I preferred them immediately to the stuff that I had heard of 'Nevermind,'” he says. “The 'Nevermind' album seemed very confined in its parameters. Each song had a beginning, middle, and an end, and it was all presented in a way that allowed you to hear each chunk. This new material, some of it was kind of sprawling and aimless, and I liked that, but there were still moments that were really powerful and dynamic. It just seemed like they had made a conceptual break in how they wanted to be and how they wanted to behave as a band, and what they wanted their music to sound like.”

Just before leaving, there was a last minute equipment crisis. “The night before they flew out I got this panicked phone call,” says Earnie Bailey. “They were practicing the night before and Kurt said that his Echo Flanger was broken. When those things break, they’re really complex under the hood, and I don’t want to say poorly made, but they weren’t built to the highest standards. Kurt said, ‘It’s the entire album—it’s got to work!’ He had been using his Echo Flanger to do all of this material, and I think he was worried that it wouldn’t sound the same. So I said that I would take a look it. We met over at Krist’s house, and it was really funny, because they popped the pedal open, and all he’d really done was he’d bumped the AC switch that turns the power on with his foot! It was hilarious, because it was such a simple fix. I was able to fix it with a Phillips screwdriver and a pair of pliers, and the level of gratitude was ridiculous. ‘Man, you saved the album!’ I had to laugh because I was like, ‘Man, this is the easiest thing I’ve ever done.’”

The band, booked into Pachyderm as “The Simon Ritchie Bluegrass Ensemble,” arrived in Minnesota the second week in February. The studio grounds also had a large house where clients could stay, another factor that helped the group focus on their work. “We were isolated,” says Novoselic. “I don’t know how we survived through that. It was pretty mellow. For two weeks, we were in this house, cooped up in the middle of nowhere, like a gulag. There was snow outside, we couldn’t go anywhere. We just worked.”

Recording began on February 13, and most days the group adhered to a regular schedule, beginning work around midday, taking a dinner break, then continuing to work until around midnight. “It was pretty simple, straight ahead,” says Novoselic. “It was pretty live. Some of those songs were first takes.” Their work ethic impressed Albini. “We earned his respect,” says Novoselic. “’Cause he would stand there by the tape machine with his arms folded. And we’d play most of the songs in the first, second take, and he’d nod his head, like all right, these guys are the real thing.”

There was a moment when [guitar tech Earnie] Bailey’s services were thought to be required. “I got a call the day or two after they arrived and they were having some kind of trouble getting going,” he says. “I wasn’t really sure what it was about, if it was problems tuning—I don’t know if they didn’t want to be bothered tuning their own stuff and didn’t really feel like it would be a big deal having me along. So they arranged for me to fly out and I was waiting for the call, and then I spoke with Krist on the phone and he said that most of the instrument tracking was finished! They pounded out most of the album very quickly; I wasn’t expecting Fleetwood Mac’s "Rumours," but I wasn’t expecting it to happen that fast either. I remember being really excited by that, just thinking that they were doing something that raw and spontaneous and not being so critical that they were going to go over everything and kill it, you know?”

As usual, most of the album’s lyrics were worked on up to the point of recording; Albini remembers Cobain carrying around a notebook of potential lyrics. “Many people would be expecting me to be writing about the last two years and my past experiences—drugs, having a child, the press coming down on us and stuff like that,” he told a journalist a month before the album’s release. “There’s a little bit of my life on [the album], but for the most part it’s very impersonal.” It was a remarkably disingenuous claim, for Cobain’s recent experiences permeated virtually every track on the record. The key events in his life the previous year had been the success of his band and the resultant media frenzy that had caused, his struggles with drugs, and the birth of his daughter. Accordingly, the record was replete with references to babies, childbirth, and reproduction (the album’s very title means “in the womb”), witch hunts, the loss of privacy, illness and disease, and ambivalence about fame. The songs expressed a heartfelt anguish that would later cause some to interpret the entire album as a cry for help, but even at the time of its release "In Utero" could easily be read as an album focused on physical and spiritual sickness. But "In Utero’s" saving grace is that it doesn’t fully give in to despair; the bursts of anger and sarcasm throughout the album keep the songs from sinking into abject despondency. Rather than being overwhelmed by circumstances, Cobain’s songs on "In Utero" show him—for the most part—still able and willing to fight back. As such, among Nirvana’s recorded efforts, it stands as Cobain’s most personal work.